Should I fit orthokeratology to a potential keratoconic? 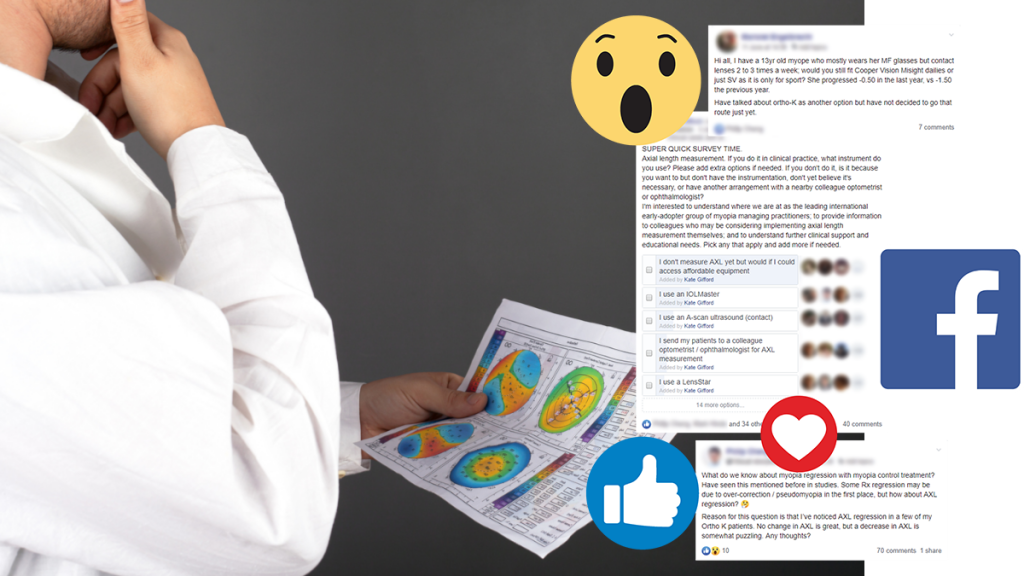 MCS was hesitating fitting OrthoK to a patient who showed inferior corneal steepening. Her main concern was that OrthoK may induce corneal ecstasia/keratoconus in the future and whether there is a link between OrthoK and keratoconus. 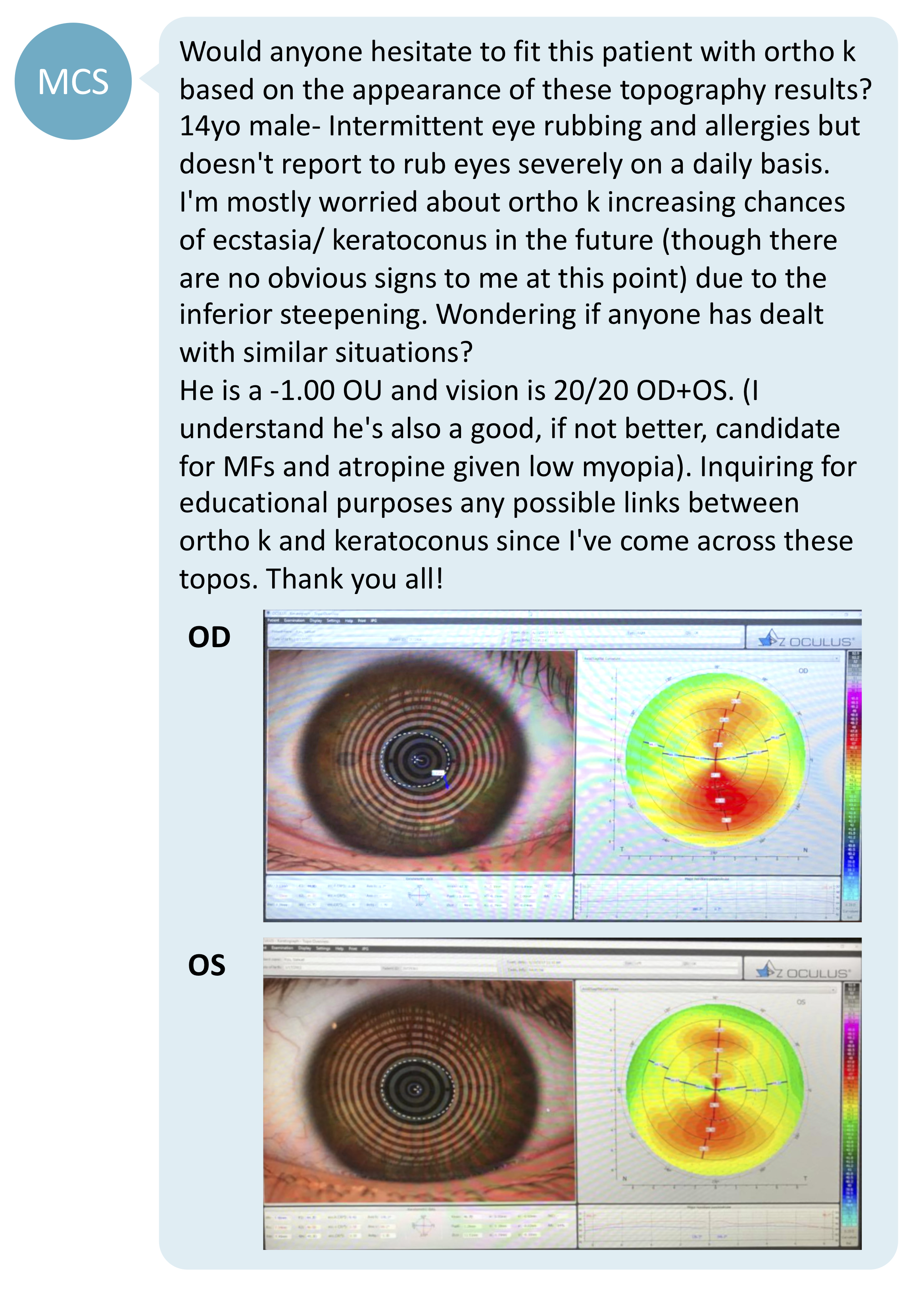 Is the patient a keratoconic? 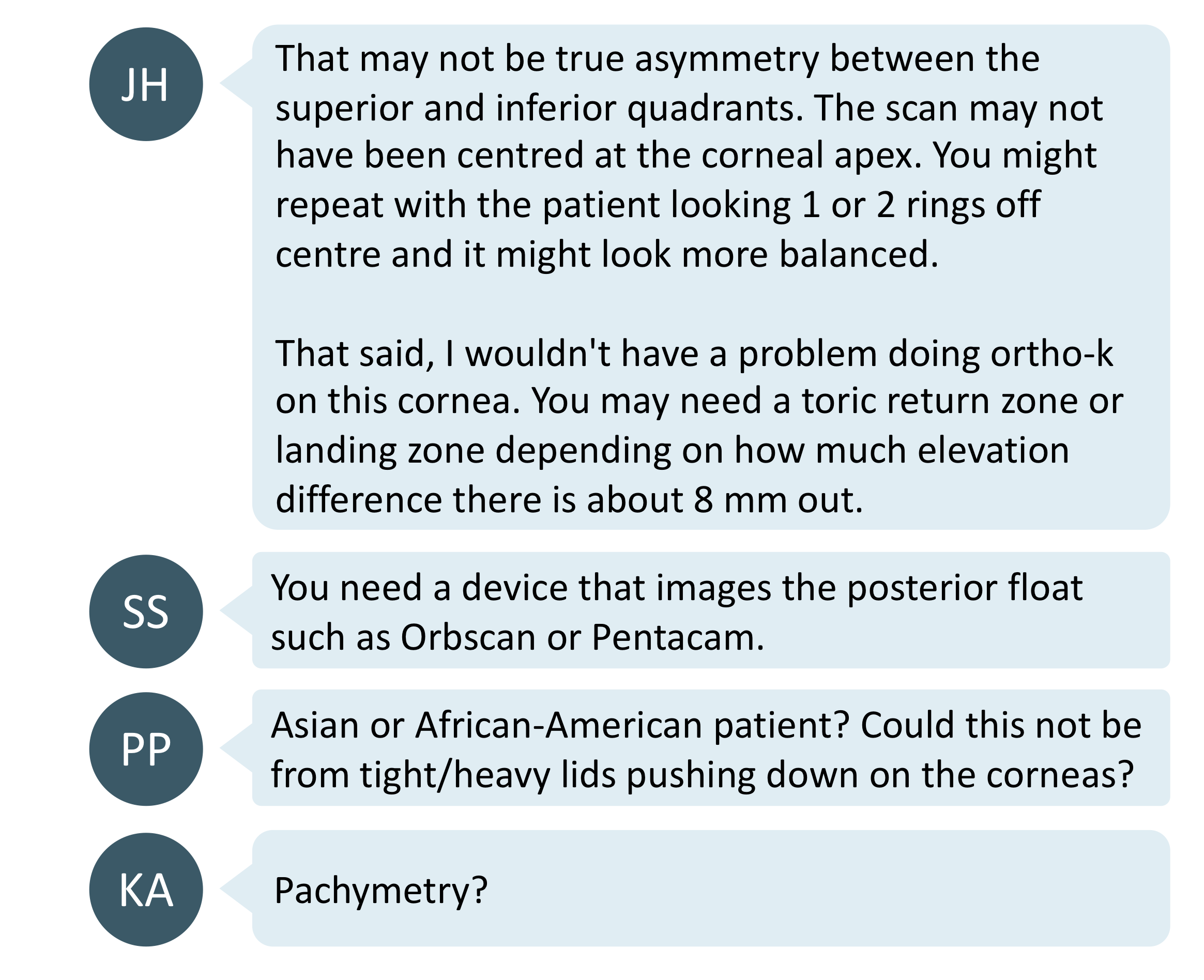 Some commenters suggested retaking good quality and well-centred topographic images and pachymetry would give more confidence in eliminating potential keratoconus.

With this being the first visit and hence no evidence yet of progressive change in the corneal profile, evaluating the patient’s risk factors for keratoconus may aid a decision. The risk factors include eye rubbing, atopy and a positive family history.1  In the case of this patient, only intermittent eye rubbing and 'allergies' are mentioned.

Other than concerns that OrthoK may cause undue stress on a potentially ectactic cornea, there was discussion that OrthoK might not be very effective on a low myope compared to other possible myopia control treatments.

The current research indicates that this assertion is not supported by scientific evidence. Read more on this topic in our blog Is orthokeratology useful for control of low myopia? The sum total is that OrthoK is likely to work just as well for lower and higher myopes, and just as well (and maybe better) than MFCLs. Current meta-analyses indicate that OK has the greater volume of myopia control evidence but the overall efficacy is likely similar as for MFCLs.

There is no research data or case reports indicating OrthoK may precipitate the development of keratoconus. As noted above, it's important to determine the level of concern for keratoconus in this patient with further testing and monitoring.

It makes intrinsic sense that we would not want to put undue pressure on a keratoconic cornea, such that keratoconus would typically be considered a contraindication for OrthoK. However there are a handful of case reports and abstracts, and even a 2009 clinical trial on use of OrthoK for keratoconus. The inclusion criteria for this clinical trial was moderate KC with no apical scars; advanced KC with apical scarring was excluded. A literature search reveals no published papers from this trial, or any other peer reviewed full-length article on the topic - it could be due to the potential controversy of this area of OrthoK practice. Here's links to the case reports and abstracts.

Here at Myopia Profile we endorse safe OrthoK practice. Reviews of OrthoK safety focus on the risk of infection and OrthoK studies typically list any corneal irregularity or keratoconus suspicion as an exclusion criteria. There's simply very little on OrthoK and keratoconus in the literature.

Compared to OrthoK, for this patient where there could be concern of corneal irregularity, alternative options such as MFCL, myopia control spectacles lenses and atropine were considered 'safer' as they would be much less likely to 'disturb' the corneal surface. This would eliminate the concern for exerting pressure on a potentially ectactic cornea and allow for much easier monitoring for any developments of ectasia.