Axial length and reduced macular sensitivity before changes in acuity 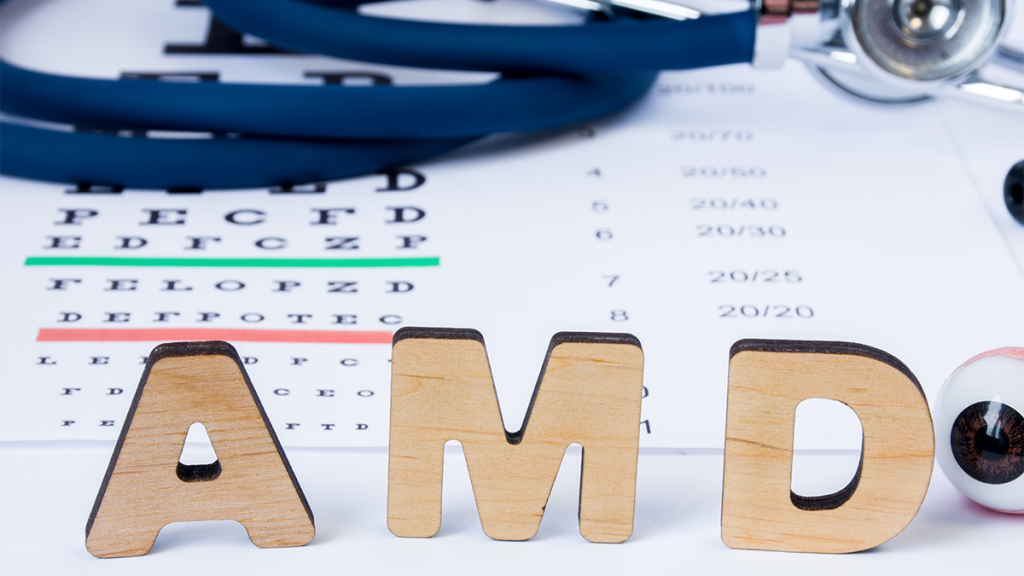 Adult high myopes (6D or more) with axial length minimum of 25mm in at least one eye were evaluated for myopic macular degeneration (MMD) by the META-PM category system, and classified into ‘MMD absent’ (categories 0-1), ‘mild MMD’ (category 2) and ‘severe MMD’ (category 3). Macular sensitivity was assessed with microperimetry at 2, 4 and 6 degrees diameter of fixation. As expected, reduced sensitivity was correlated with more severe MMD. After adjusting for several factors, longer axial length was independently associated with worse macular sensitivity. Furthermore, while ‘absent’ and ‘mild’ MMD categories had similar best corrected visual acuity (BCVA), the ‘mild MMD’ category showed reduced macular sensitivity, indicating this microperimetry test could be a more sensitive marker of visual function in eyes with macular disease than BCVA.

The pervasive frequency of myopia in Singapore provides a volume of opportunity to understand the visual sequelae of high myopia. In this study, highly myopic adults with diffuse chorioretinal atrophy (META-PM Grade 2) showed reduced microperimetric macular sensitivity before any loss of BCVA, when compared to eyes without MMD. With an average age of 54 years and axial length of 28mm, these patients reflect people of working age likely to be seen in routine clinical practice and not just in tertiary retinal care. While longer axial length was associated with reduced macular sensitivity, although only 15-25% of the loss of sensitivity was explained by axial length indicating other factors can be at play. This underscores the importance of monitoring retinal health closely for any patients with longer eyes and high myopia, and points to use of microperimetry – more commonly used in retinal subspecialty tertiary eye care – as a more sensitive clinical tool than BCVA for monitoring the at-risk and compromised macula.

This was a video presentation of an ARVO abstract, so the full peer reviewed methodology is not available for critique. The authors themselves mentioned their small sample size and the repeatability of the microperimetry test as limitations, although noted that testing more points would take more time and could lead to more variability through fatigue. Future research cited by the authors includes investigating correlations between microperimetry results in different categories of MMD with choroidal and retinal thickness using OCT; as well as with retinal vascular parameters using OCT-A.

Microperimetry aims to quantify retinal sensitivity with simultaneous fundus viewing – combining the structure of retinal anatomy with functional assessment of sensitivity. It differs from standard perimetry by incorporating real-time retinal imaging and an eye tracker to compensate for eye movements, which is particularly useful in macular disease and/or situations of impaired fixation.(1)

This study aimed to evaluate whether axial length independently affects retinal sensitivity, in the presence of disease or not; and if mild myopic macular degeneration (MMD) has functional implications not quantified by best corrected visual acuity (BCVA). Retinal sensitivity, measured by microperimetry, was correlated with axial length (AXL), BCVA and MMD category.

Classification of MMD has been defined by the Meta-Analysis for Pathologic Myopia (META-PM) Study Group (2) via a detailed photographic classification. While this paper isn’t open access – so the images can’t be reproduced freely – an open-access summary entitled Pathologic Myopia by the same lead author has provided the following table.(3) Categories 0 to 4 are described, along with three ‘plus’ signs of lacquer cracks, choroidal neovascularisation and Fuchs spot. Further detail of how these definitions fit within the spectrum of myopia classifications can be read in the open access IMI paper – Defining and Classifying Myopia.(4) 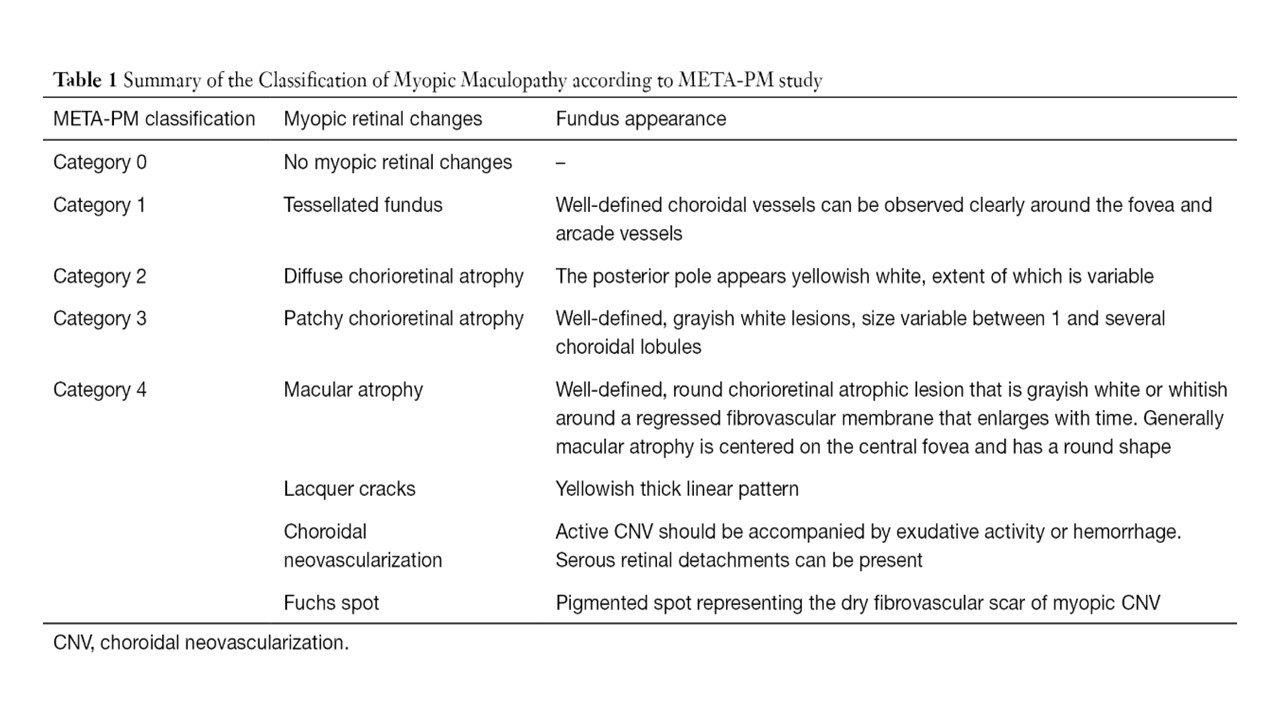 (Note: these results differed in the video presentation of the abstract to the submitted abstract below, likely because the authors gathered more data between abstract submission and data reporting, so the newer, video presentation results are reproduced here).

All microperimetry tests – at 2, 4 and 6 degrees diameter of fixation – showed a statistically significant correlation between reduced sensitivity and longer axial length. These correlations had R values of -0.43, -0.36 and -0.51 and 2, 4 and 6 degrees respectively. Multivariate analysis adjusting for age, gender, MMD categories and inter-eye correlation showed that axial length was independently associated with macular sensitivity at 6 degrees. Best corrected visual acuity (logMAR) showed a R=-0.60 correlation with macular sensitivity, but the correlation between BCVA and axial length was only R=-0.26. Perhaps the most interesting finding was that the ‘mild MMD’ eyes (META-PM category 2) showed reduced microperimetry results compared to ‘MMD absent’ eyes, despite their BCVA not being significantly different. The lower BCVA-axial length correlation and latter finding led the authors to conclude that macular sensitivity was a more sensitive marker of visual function in longer eyes than BCVA.

The results of this study are in agreement with other, larger studies which have shown longer axial length, more myopic refraction and older age correlate with more significant MMD.(5) This study did not elucidate why axial length is associated with reduced macular sensitivity. Another recent study has shown that in chorioretinal patchy atrophy (PA), retinal sensitivity is reduced in not just the atrophic zones but also the adjacent zones of non-atrophic retina. The authors describe this as potentially due to loss of healthy photoreceptors in non-atrophic zones due to nearby atrophic RPE defects.(6) Another microperimetry study of high myopes showed a correlation between reduced choroidal thickness and reduced retinal sensitivity, even without a correlation between foveal and macular thickness. These authors concluded that overall choroidal thickness could be more relevant to visual function than retinal thickness.(7)

Methods: This is a clinic-based observational study of 49 eyes of 26 patients with AL ≥ 26.5 mm, enrolled from the high myopia clinic of the Singapore National Eye Centre. AL and anterior chamber depth (ACD) were measured with the IOLmaster. Myopic maculopathy (MMD) was graded from fundus photographs according to the META-PM Classification. Absence of MMD was defined as META-PM category <2, mild MMD as META-PM category 2 and severe MMD as META-PM category 3 or 4. Microperimetry was performed to measure macular sensitivity (MS) at central 6 degrees and 2 degrees. We analyzed the correlation of MS at these points to AL, logMAR BCVA and compared MS across different MMD categories.

Conclusions: Macular sensitivity decreased with increasing axial length and worsening severity of MMD. Macular function as measured by microperimetry may be a more sensitive marker of visual function than visual acuity in eyes with MMD.