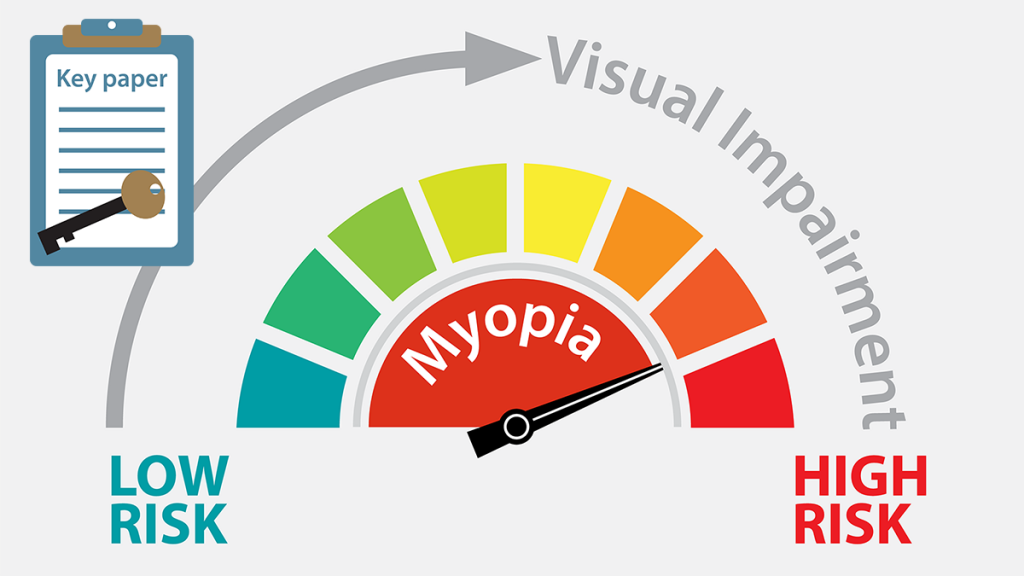 Myopia is increasingly frequent in many developed countries and we now know it isn’t simply a matter of poor vision which we ‘fix’ with spectacles or contact lenses.  It can lead to myopic maculopathy, glaucoma, cataract and retinal detachment and having 'high' myopia increases these risks further.  These eye conditions can all potentially lead to reduced vision at best and blindness at worst.  As myopia increases, the eye’s total axial length has been seen to increase too, and it is this elongation which leaves the eye at risk from ocular pathologies.

The classification of what constitutes ‘high’ myopia can vary.  The World Health Organisation (WHO) decided on a threshold of -5.00D and stronger in 2015 (1).   For the purposes of their study, Tideman et al classed participants as being highly myopic when they had a spherical equivalent (SE) of -6.00D and an axial length (AXL) of 26mm or more.

This study used cross-sectional data collected from population-based studies undertaken by the Rotterdam study (I, II & III) and the Erasmus Rucphen Study.  These results were combined with case-control data from the Myopia Study, with participants across all studies being 25 years or older.  The authors wished to explore a link between visual impairment as a result of increased AXL, refractive error and to be able to apply this to the wider population.

It’s all about the risk

This is a robust analysis taking in the data of more than 15,000 individuals, across multiple studies. The key area for future research is to measure how myopia control interventions for today's generation influence their rates of pathology and vision impairment in the future. This is a very long-term question, as our current generation of children with access to myopia management will need to age another 50-60 years before their outcomes could be compared to the ages analyzed in this paper. To this point, the authors recognized that their calculated risk estimates will become overstated with adoption of (successful) myopia strategies to slow myopia progression.

Race specific studies: The authors made predictions of varying prevalence for different countries, but these were based on values originally gathered from Europeans and they were aware this may not be directly applicable to other ethnicities.  They were able to allow for this by using reported prevalence estimates for each country.  At the time of publishing (2016), Tideman et al were unaware of any likely ethnic differences and felt confident they were making feasible predictions. Similar research across different ethnicities would help determine whether this observation holds true.

Changes in prevalence: The study revealed a steady shift from hyperopia to myopia when they looked at the birth decades of the participants, particularly from 1920 onward, with a higher myopic prevalence in the younger group (25yrs to 60yrs).  This suggested that the population had been getting more myopic with time and that the chance of impairment with age was increasing alongside it.  The authors predicted that by 2055 there would be a 2 to 3-fold increase risk of visual problems in Europe, a 3 to 5-fold chance in Singapore and a 3 to 6-fold in the Republic of Korea.  This was based on their findings where the last study to be included in their analysis was from 2012.  It is possible that the likelihood of myopic pathologies could have increased beyond their expectations since then. Further follow-on studies could verify if this has changed significantly.

The total axial length of the eye is taken from the most anterior part of the corneal surface to the furthest point at the back of the globe and there has long been an association with the length of the eye and myopia.  There has also been an increasing awareness over many years between the extent of the myopia itself and ocular pathologies arising from it such as myopic maculopathy and torn/detached retinas.  The authors of this study wanted to prove a link between the axial length and refractive error of the eye, and the likelihood of myopic pathologies with age.

The participants were adults only with an age range of 25yrs to 75yrs and over, with a mean age of 61.3 yrs.  Across the cohort, axial length varied from 15.3mm to 37.8mm and the refractive error ranged from +14.00D to -25.00D as a spherical equivalent (SE).  The number of those with ‘high’ myopia of -6.00D or stronger was 796.  The axial lengths were available for 9,074 people after AXL measuring was undertaken at a later stage in the Rotterdam studies and some of the participants from the Myopia Study were excluded from the data for the AXL and SE due to the study design.

The prevalence of vision impairment was found to vary from between 1.0% - 4.1% in the population-based studies and 5.4% in the Myopia Study.  This was all compared to the control prevalence which was 0.3%.

Logistic regression techniques were used to calculate the odds ratio (OR) for visual impairment that would arise as a result of AXL and the refractive error.  For having a 26-28mm axial length, the under 60yrs group had double the risk of the reference group who had 24-26mm length, compared to the over 60yrs group that had a 3x risk for the same AXL.  The statistics then took a large jump with the under 60yrs group having an 11x chance for a 28-30mm AXL and 25x for if it was over 30mm.  The over 60yrs group showed a similar jump with the 28-30mm AXL, but they then showed around a 94x risk if the AXL was 30mm or more.

For the SE (in dioptres), there was a similar jump in results.  For refractive error between -3.00D to -15.00D, there was a 1.5x to 6.8x risk of visual impairment for the under 60s, and the same refractive range showed similar for the over 60s with between 1.7x to 7.8x risk.  It was when the refractive error was -15.00D or higher there was more difference where the younger age group had 28x risk, compared to nearly 88x for the older group.

The AXL and the refractive error were significantly related to each other, but also to impairment likelihood.  Of those who had been classed as having high myopia, 39% had developed some form of visual impairment caused by their myopia by the age of 75yrs old.  Those with longer axial length had a higher chance of having myopic-linked vision impairment and this increased from a 3.8% chance if the AXL was less than 26mm to a 25% chance if the AXL was 26mm or longer.  An AXL of 30mm or longer was associated with a 90% chance of vision impairment in their lifetime due to complications of myopia.

The worrying findings from this analysis are significant in explaining the realistic probabilities of ocular conditions arising from high myopia and increased AXL.  The authors suggested that those at the stronger end of the myopic scale may find their risk is “unavoidable” as we currently have no treatments that halt or reverse the impairments high myopia can give – sadly the damage is already done.

However, the older age group in the study (60+yrs or more) wouldn’t have had the myopia management options we have now for intervening with their myopic progression in their youth when they needed it.  If myopia and its risk of visual problems has a higher prevalence and those who end up with those visual problems have them earlier in life, then it’s very important that we have myopia-reducing strategies (and use them!) so we can avoid axial elongation, high myopia and its associated risks.

Simply put, eye care practitioners now have many tools at their fingertips to slow myopia progression – reduce the eye length…reduce the risk for future visual impairment!

Importance Myopia (ie, nearsightedness) is becoming the most common eye disorder to cause blindness in younger persons in many parts of the world. Visual impairment due to myopia is associated with structural changes of the retina and the globe because of elongation of the eye axis. How axial length—a sum of the anterior chamber depth, lens thickness, and vitreous chamber depth—and myopia relate to the development of visual impairment over time is unknown.

Design, Setting, and Participants Visual impairment and blindness (defined according to the World Health Organization criteria as a visual acuity less than 0.3) and predicted rates of visual impairment specifically for persons with myopia.

Main Outcomes and Measures Visual impairment and blindness (defined according to the World Health Organization criteria as a visual acuity less than 0.3) and predicted rates of visual impairment specifically for persons with myopia.

Conclusions and Relevance This study demonstrated that visual impairment is associated with axial length and spherical equivalent and may be unavoidable at the most extreme values in this population. Developing strategies to prevent the development of myopia and its complications could help to avoid an increase of visual impairment in the working-age population.