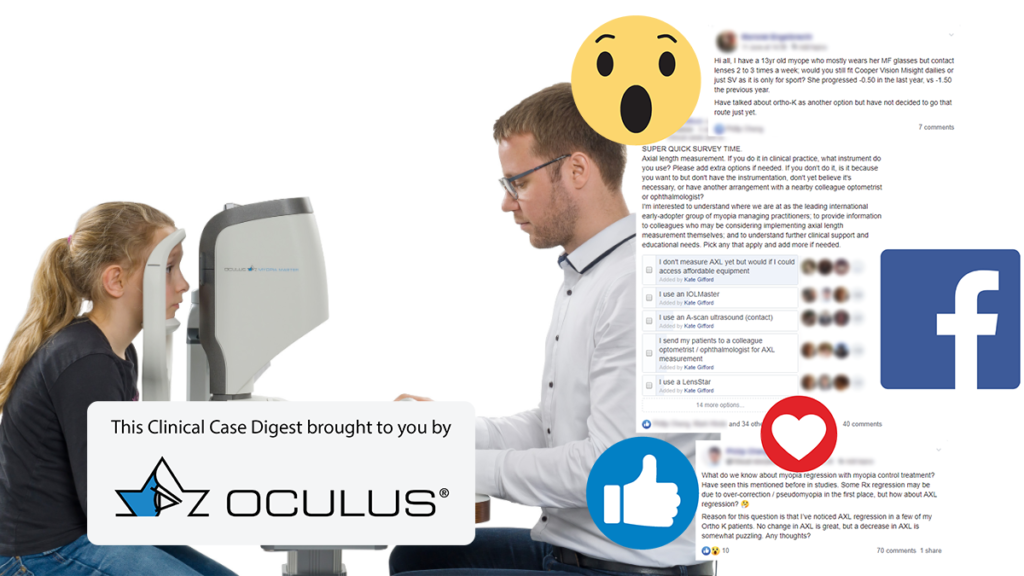 It is estimated that 10% of the world population will have high myopia by 2050.1 High myopia is associated with a higher risk of various ocular health issues such as retinal tears, retinal detachments, and myopic maculopathy.2 Whilst refractive error is correlated with this risk, the stronger predictor of ocular health issues and risk of vision impairment is with axial length - the point where risk significantly elevates is 26mm.3 In this case shared with the Myopia Profile community, CL discusses the management options for a child whose axial length is fast approaching this point. 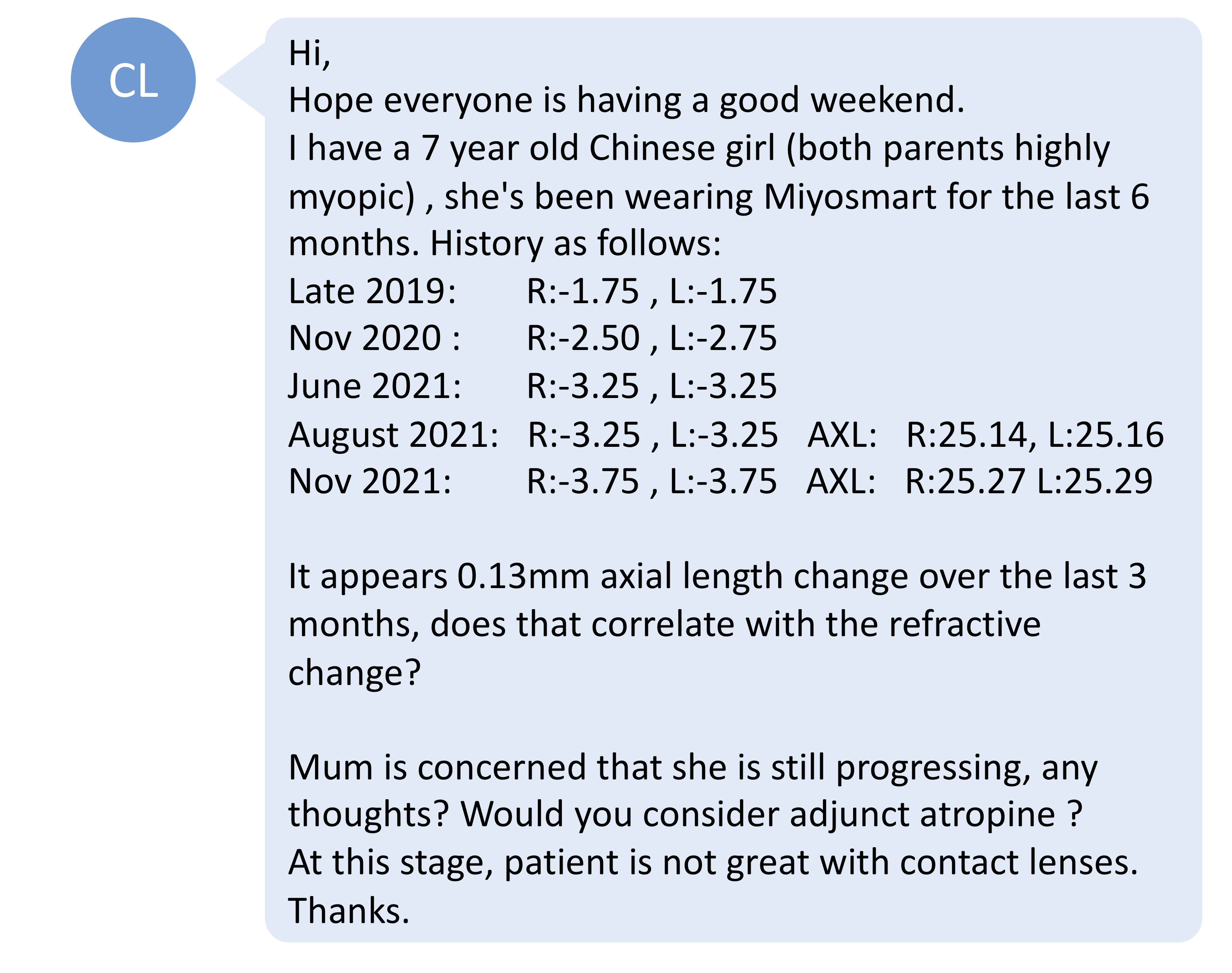 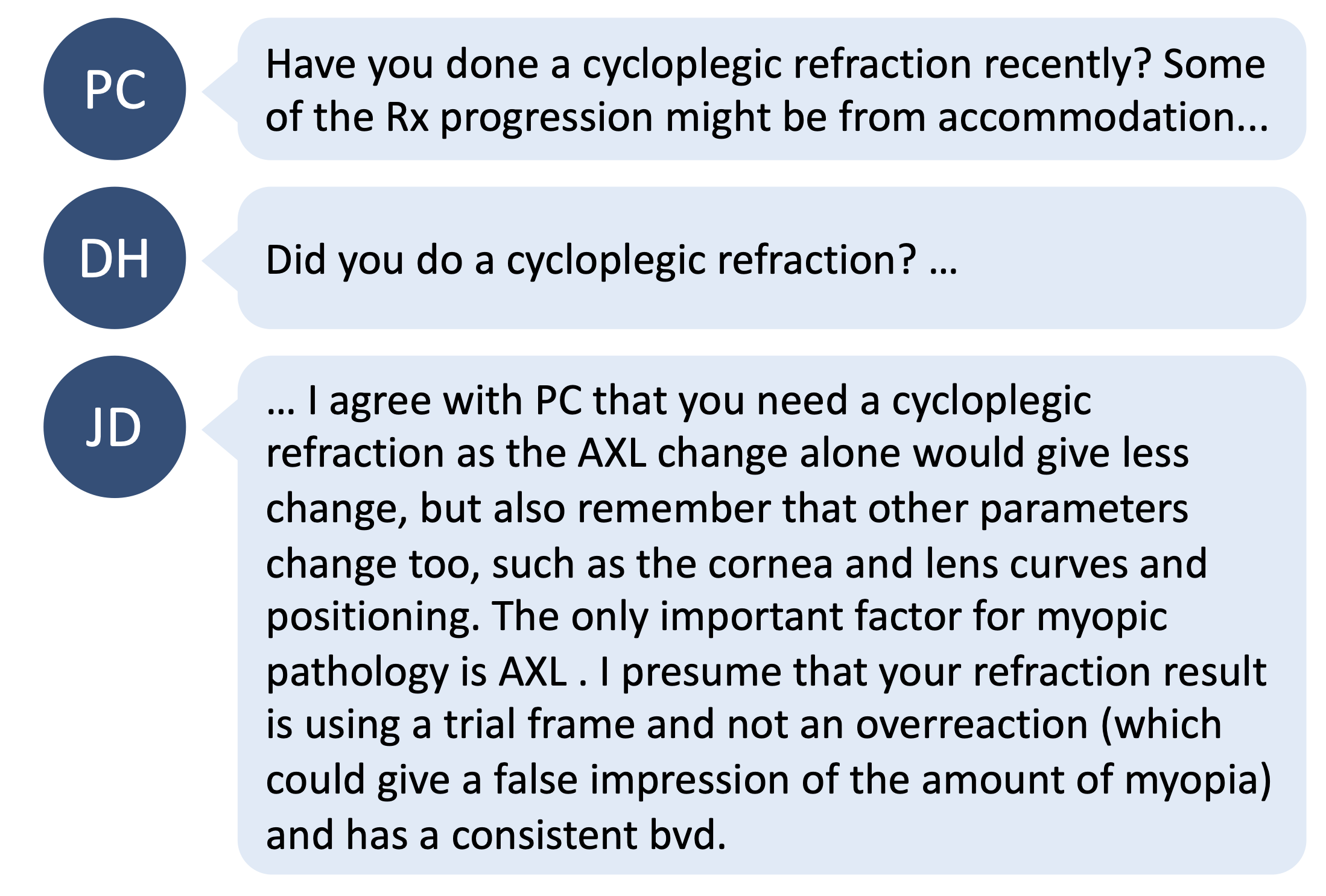 There are two pieces of clinicial data which indicate myopia progression in this child. The most obvious would be refractive error. Various comments suggested a cycloplegic refraction to avoid a refractive error result falsely elevated by an overactive accommodative system.  You can also read How To Achieve Accurate Refractions For Children for more information. 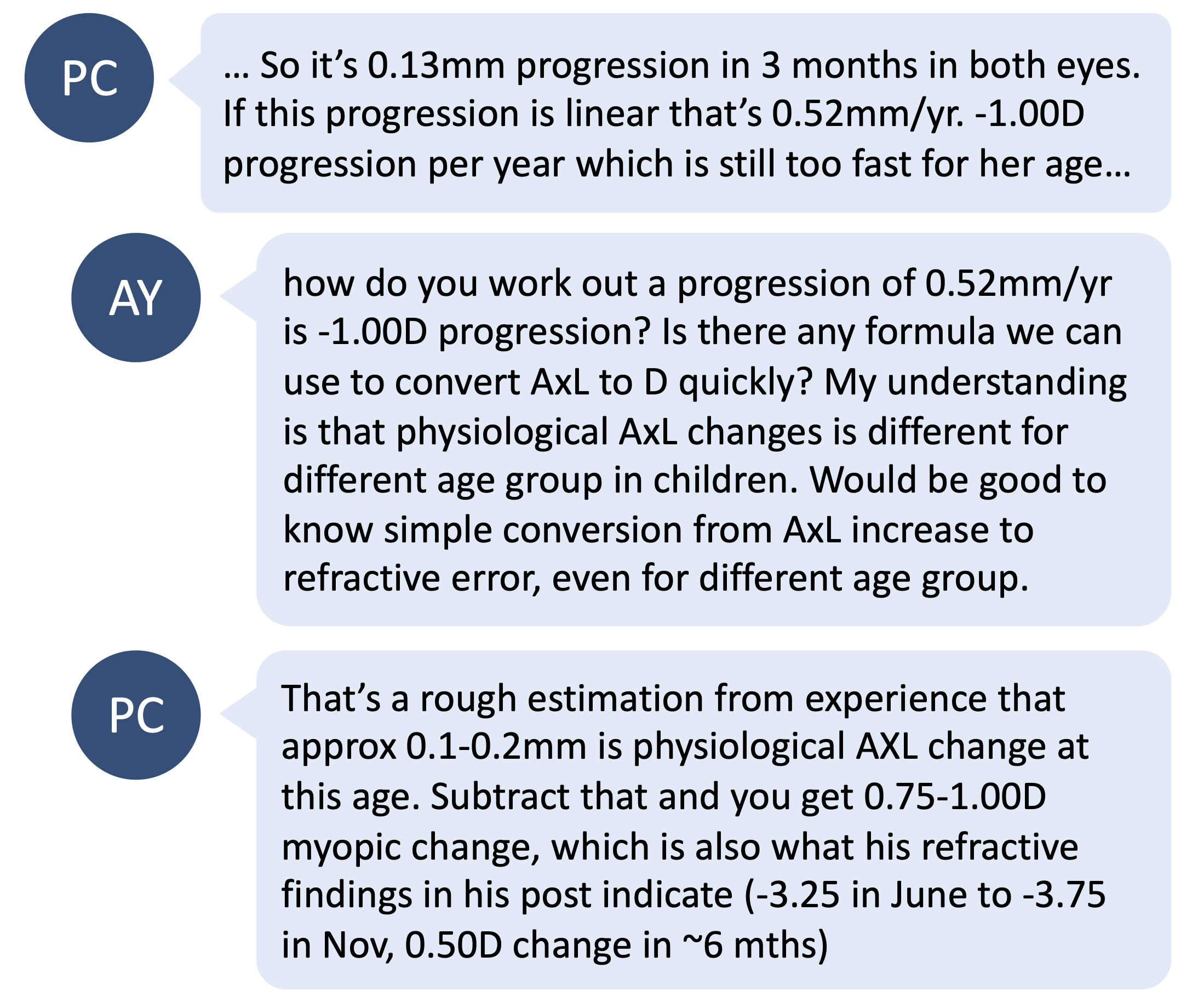 The second part of this story is axial length. CL provided two sets of AXL readings separated by 3 months, showing a change of 0.13mm in that time.

A study found that Chinese myopic children without intervention have an average annual axial length growth of around 0.3mm.4 From PC’s calculation extrapolating this 3 month change to 12 months, this patient could have more than 0.5mm axial length change if the trend remained linear, exceeding the average rate of progression shown in the aforementioned study.

The relationship between axial length (AXL) and refractive error is quite complex. For simplicity's sake, clinicians generally follow the rule where 1mm is equivalent to 3D of refractive error. The literature suggests that this is not quite as simple as that. Recent studies of contact lens interventions have shown that 1mm was equivalent to 2.40D in one study,5 but around 1.55D in another study,6 despite these studies involving similarly aged progressing myopic children.

Which matters most - axial length or refraction?

Of course both measurements matter - refraction is the visible concern of myopia and correcting vision is of utmost importance. As the commenters have done in this case, it is useful to compare axial length to refraction to check for potential errors in either measurement - for example by considering cycloplegic refraction as noted above. Using an optical biometry method of measuring axial length will ensure its utmost accuracy.

It is much simpler in this case, though, to simply consider the axial length in isolation. Regardless of the refractive error, the axial length has progressed and is approaching that high risk point of 26mm. Using axial length growth charts would demonstrate that this child's axial length is in the highest percentiles for her age. The image below is an output from the OCULUS Myopia Master, not related to this case, which for this child would indicate how high the axial length is compared to other children of the same age, and also predict the very high likelihood of this child progressing to high myopia across their childhood. These reports can be printed, with advice on visual environment and treatments included, for parental education. 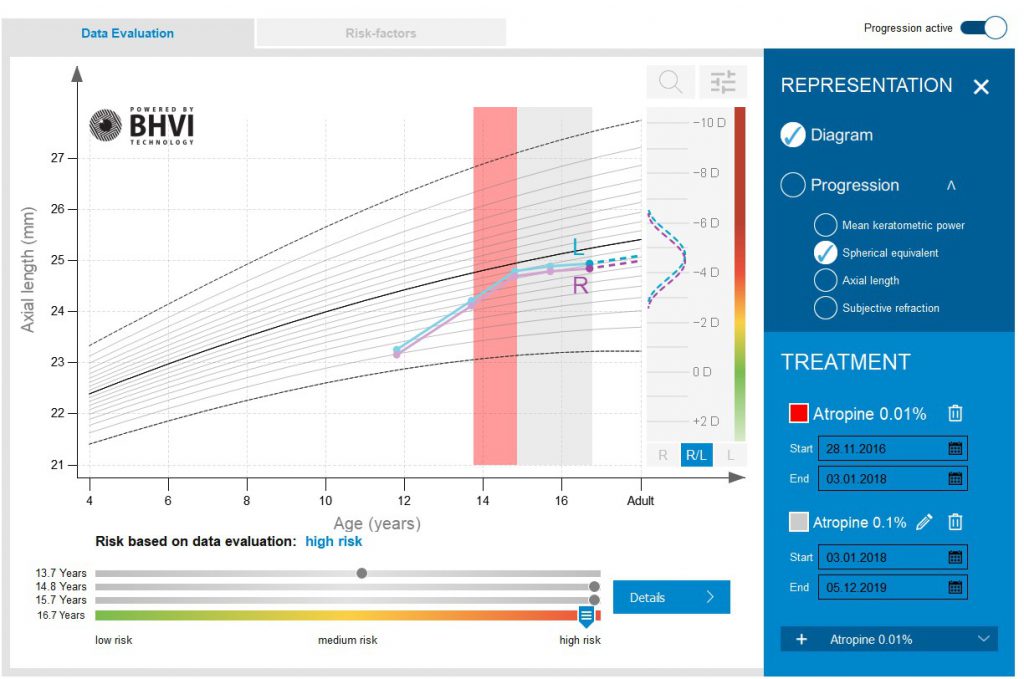 What can be done now?

Considering her young age and the fast rate of myopia progression, the commenters suggested combining a form of optical myopia control treatment with low-dose atropine. It is worth noting, though, that there is currently only evidence for combining orthokeratology with atropine for additive efficacy. The commenters also recommended to check compliance with the treatment and consider other options - read more advice on this in Why isn't the myopia control strategy working?