Using growth charts to track progression of myopia – can they be used to predict success with MiSight? 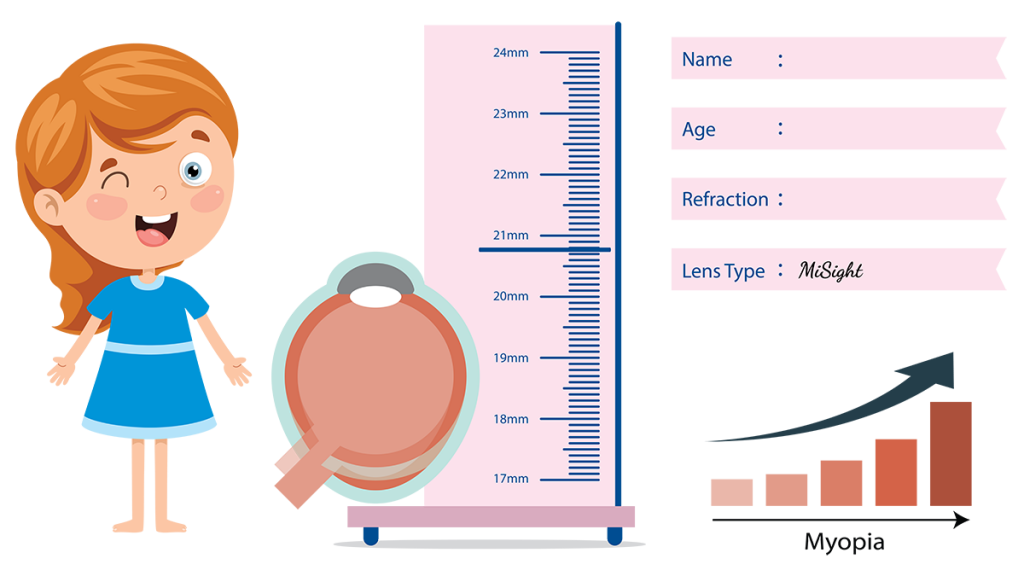 Translating clinical trial results into clinical practice is made difficult by differences in participants vs patients and applying clinical trial analysis to a practice setting. The authors introduce the concept of using growth (centile) charts to monitor myopia progression and use these charts to assess the previously conducted MiSight 3-year data set to establish a good fit between the published outcomes from the clinical trial and representation on changes to centile chart tracking. This research establishes centile charts as a useful tool to use in clinical practice to determine successful outcome from a myopia control intervention.

Centile charts offer a simple way to monitor myopia development in an individual to determine whether they are likely to be slow or fast Progressors and whether a myopia control intervention is having an effect. However, while this provide promise, they are still at a relatively early stage of development.

Questions that they wanted to look at in the current study:

Growth (centile) charts have been established to predict future height and weight amongst other characteristics, and their widespread use makes them a simple to follow and understand concept. However, their use in eye care is relatively new. Consequently the authors created their own centile chart for refraction from 50,957 8-18 year olds extracted from 225,000 anonymised electronic European community health records. 9,092 contained refractive data over multiple visits.

The concept underlying use of centile charts is that change to predicted outcome can be identified from whether a child crosses centiles. Continued development can be assumed if their progress tracks the centile that they have previously been found to be following, crossing down to a lower centile indicates a reduction to rate of growth and crossing up to a higher centile indicates an increase to rate of growth. In myopia management terms these charts, if they could be reliably established, would provide a useful tool for assessing whether or not a myopia management intervention was providing a successful outcome.

Results from applying the developed centile charts to the MiSight dataset
Qu 1: Do MiSight 1 day study subjects cross down centile tracks (indicating reduction to myopia progression) as expected?
Answer: Yes they do (on average)

Qu 2: Does everyone respond?
Answer: No

Qu 3: Is the treatment having an effect in a single subject?

Answer: Yes, the centile charts appear to provide the ability to track outcomes from individual participants, however it needs to be kept in mind that the true outcome for each individual is not known.

It needs to be kept in mind that centile charts are a model and people don’t necessarily follow models, so the displayed individuals that followed or tracked up centiles despite receiving the treatment may well have progressed even more had they not received the treatment - while the presented analysis helps shed some light on a useful tool to assess myopia progression and determine whether a treatment is providing a successful outcome, they still have some way to go to understand their limitations - in these cases whether the treatment didn’t work or instead whether the problem lies with the centile charts not being sufficiently representative across broad populations remains to be answered.

The authors presented how this kind of analysis could be summarised for use in practice in what they called a ‘refractogram’ with measured refraction, axial length and rate of progression charted over time to indicate whether the previously established centile for an individual patient was being tracked (expected outcome from no intervention), tracking up (worsening outcome) or tracking down (improving outcome).

Purpose: To employ centile analysis for assessing the treatment efficacy of a clinical trial for myopia control, and to quantify differences in the natural history of myopia progression in the treatment group, control group and conventional clinical practice.

Results: The partial MiSight control group showed no significant change in centile values of spherical equivalent refraction over three years (mean change -0.9, 95% CI -2.8 to 1.1) indicating that they were following the natural history pattern seen in the population based sample, whereas the treatment group showed a change of -10.7 (95% CI -12.7 to -8.7, Fig. 1). First year annual myopic progression in the control group was similar to that seen in the population sample with a mean centile of 58.4 (95% CI 53.3 to 63.5). In the treatment group the mean progression centile value was significantly lower at 32.6 in year 1 (95% CI 26.9 to 38.4), a difference that persisted over the three years of the trial (Wilcoxon, P= 0.027). Histograms of progression centiles show that the treatment group displayed a reduction in fast progressors, an effect present in both young (<= median age) and older subjects (> median age) (Kolmogorov-Smirnov two-sided test, treatment vs control young P < 0.00001, older group P < 0.0005, Fig. 2).

Conclusions: This analysis indicates that the MiSight lens can alter the natural history of myopia. There was a reduction in the proportion of fast progressors in both the younger and older treated subjects. Population based centile analysis offers the prospect of monitoring the treatment efficacy of myopia control interventions outside a clinical trial and allows individual clinical practice patients to be benchmarked against the results obtained during the MiSight trial.