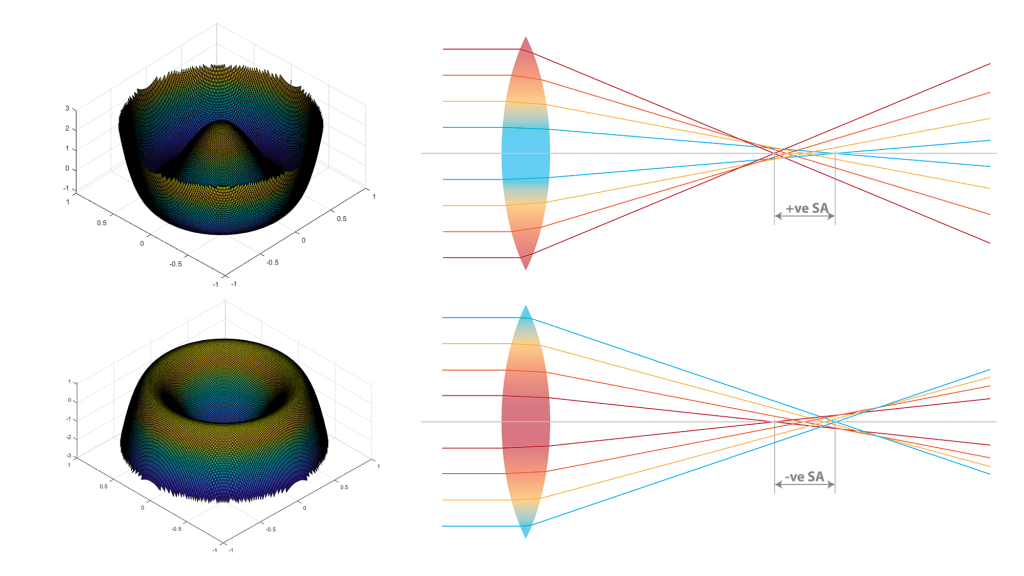 Spherical aberration is the ocular wavefront aberration term that you are likely to face when considering optical correction for managing progression of myopia. In this article I’m going to dig into spherical aberration (SA) and why it regularly appears in the myopia control literature. If you need a background refresher on how wavefront aberrations are calculate and interpreted in general, you might want to check out my Understanding Ocular Wavefront Aberrations post first.

Zernike polynomials describe a mathematical construct that has proven well suited to describing wavefront profiles and allowing them to be broken down into individual aberration components. If you are not familiar with Zernike notation then check out my Understanding Ocular Wavefront Aberrations post. The Zernike notation illustration of SA is an inverted lipped bowl (see left image below), with the amount of SA shape within the wavefront described by a weighting number in units of the wavelength of the light that forms the wavefront. The shape can be inverted by giving the weight a negative sign (see right image below). 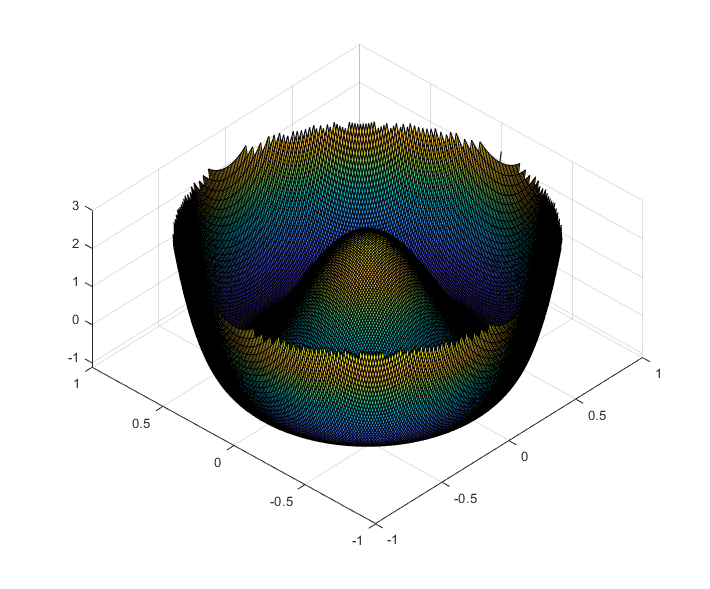 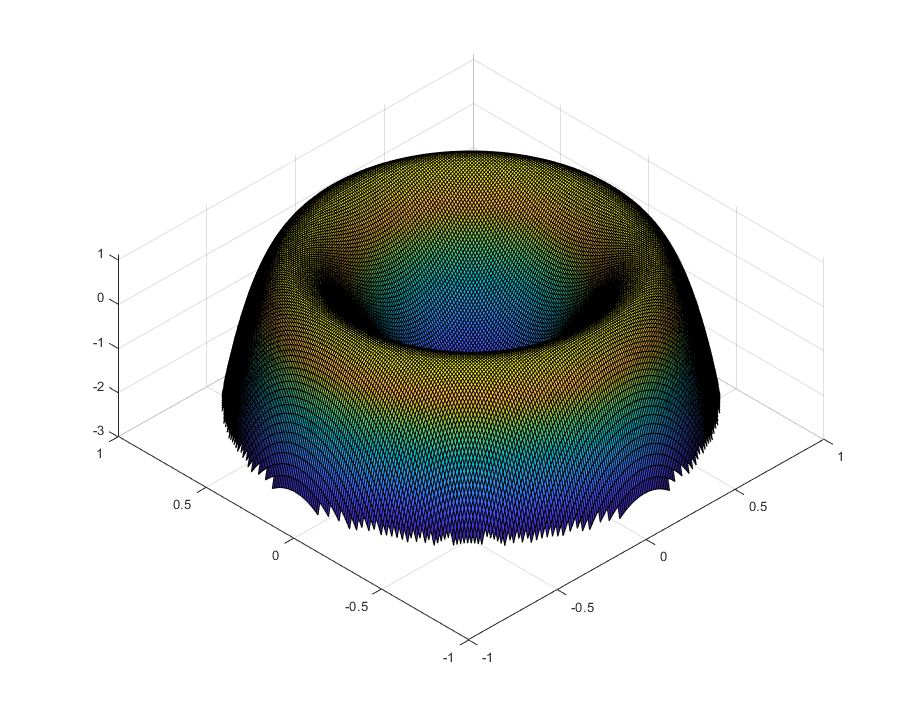 The optical effect of spherical aberration

The optical effect of spherical aberration is to refract peripheral paraxial (incident light that is parallel to the optical axis) light rays by greater or smaller amount relative to central rays with increasing distance from the optical axis. In the case of positive SA (normal human eyes) the outer paraxial rays are refracted by a greater amount than central rays. The opposite is the case for negative SA (see Understanding Ocular Wavefront Aberrations for explanation about negative value aberrations), where more peripheral paraxial rays are instead refracted by a lesser amount than central rays. The result in both cases is to cause longitudinal spread of focus from a point source object when compared to an ‘optically perfect’ system (see images below).

In normal human eyes SA is the greatest represented ocular aberration, with an average reported value of +0.08±0.07µm for a 5mm pupil(1) and around +0.1±0.1µm for a 6mm pupil diameter (2-4). Most of the eyes inherent spherical aberration is provided from the cornea at +0.12±0.04µm for a 5mm pupil(1) and +0.28±0.09µm for a 6mm pupil(5) which is partially balancing by lenticular contribution of -0.01±0.07µm for a 5mm pupil(1). As the eye accommodates the negative SA contribution from the crystalline lens increases by -0.04µm per diopter of accommodation on average for a 5mm pupil(6), which causes the normal eye to shift from a positive SA state at rest through to an increasing negative SA state with increasing accommodation. As for any biological measurement there is of course considerable variation across individual eyes, with the above stated values indicating averaged data collected from study participants.

Why spherical aberration ‘could be’ an important measure in myopia control

Many animal studies have shown a clear relationship between optical defocus and myopia progression, where image focus posterior to the retina ‘hyperopic defocus’ has been shown to accelerate eye growth and the opposite case where image focus anterior to the retina ‘myopic defocus’ has been shown to slow eye growth. You would need to be living under a rock to not have heard about peripheral defocus, where it has been shown, again in animal studies, that promoting myopic defocus just across peripheral retina regions while maintaining good focus at the macula (relative peripheral myopia) also slows progression of myopic eye growth. Optical devices designed to provide the same effect have gone on to demonstrate good efficacy for slowing myopia progression in humans.

We also need to keep in mind, however, that the human visual system is incredibly complex with the human eyes focussing system being similarly highly complex. On average, our eyes tend to include some degree of focussing lag where the optical focus of the system falls behind the macula when viewing an object, which is inherently what I have just described as hyperopic defocus, that has been shown to accelerate myopia progression in animal studies. This lag of focus is typically described as a lag of accommodation because in a distance refraction corrected non-presbyopic eye it is accommodation that controls the position of retinal focus. Scientists are still deliberating on whether lag of accommodation is a factor in myopia progression, however it brings us nicely to the topic of SA, because as covered above, increasing SA increases depth of focus and in doing so provides a possible optical solution to compensate lag of accommodation.

Increasing the peripheral refractive power of the optical system relative to the central refractive power causes more peripheral paraxial light rays to focus increasingly more anteriorly than paraxial rays that are aligned closer to the optical axis (see image below). This has the effect of increasing the longitudinal range of focus, which, if measured by a wavefront sensor, would illustrate an increased amount of positive SA.

The underlying concept here when applied to myopia management is that increasing SA and thereby depth of focus should help offset the detrimental effects of accommodation lag - the system can still lag in focussing but the increased spread of the image focus causes the more peripheral paraxial rays to focus more anteriorly, i.e. more myopically (see image below). It’s a balance though as lengthening depth of focus by increasing SA also degrades the overall sharpness of the image - too much SA and the image quality degrades to the point of being intractably blurred regardless of state of accommodation. This balancing problem is a thorn to multifocal contact lens designers that attempt to adopt or partially adopt manipulating SA as a way to increase the range of clear focus to allow simultaneous distance and near focus. If you're interested, you can read more about spherical aberration and accommodation via the link.

Centre distance multifocal contact lenses and orthokeratology have both demonstrated efficacy for slowing progression of myopia, which has largely attributed to the fact that they induce relative peripheral myopic defocus - remember from above that in animal studies peripheral myopic defocus has been shown to slow myopic eye growth. However, the same optical profile also increases positive SA - changes to relative peripheral focussing properties of a lens and SA induced by the lens are inherently linked - one can’t be manipulated without affecting the other in some way.

Does this mean that it is positive SA and not relative peripheral myopia that is the primary benefactor for slowing progression of myopia? I’m not sure this is known right now. The peripheral refraction theory has more runs on the board, but there is increasing research being published investigating the influence of SA in myopia management, which is why it is useful for you to have at least some understanding of SA and how it could possibly apply to myopia management.

I’ve heard this statement a few times in various different contexts, which appears to have gained traction because orthokeratology and centre distance multifocal contact lenses increase positive SA. The line of thinking appears to be that these contact lens types induce positive SA and they also have been proven to slow progression of myopia, therefore increasing positive SA must be a good thing for slowing progression of myopia, and therefore it must be protective.

It is true that many optical devices shown to be effective at slowing myopia progression also induce a positive shift to SA. However, saying that this means the latter is the reason for the former falls into the well reported human bias of inference from correlation. By example, ice cream sales and hotter sunny days are typically correlated, with ice cream sales increasing on hotter days, but this association does not therefore mean that people could turn a rainy day into a sunny day just by eating more ice cream. Similarly, increased SA induced by a myopia control device does not automatically mean that this will protect against myopia progression.

Some future research study might well show a causative association and therefore protective effect, but until this is the case it is dangerous to assume that increasing positive SA alone will provide protection against myopia progression.

Further reading in our science series on aberrations