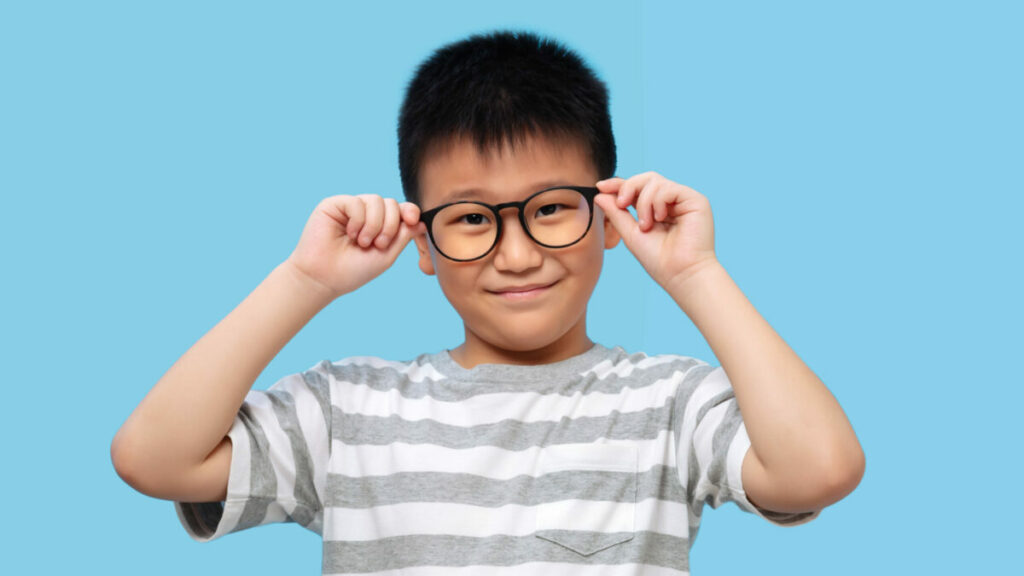 This paper presents the two-year data from the clinical trial of highly aspherical lenslet (HAL) and slightly aspherical lenslet (SAL) spectacle lenses for myopia control. Read about the one-year data here. This new innovation in myopia controlling spectacle lens technology uses aspheric lenslets to "creates a three-dimensional quantity of light in front of the retina, which we call volume of myopic defocus (VoMD) in this paper." Each lenslet is 1.1mm in diameter and "11 concentric rings are formed [across the lens] by  contiguous aspherical lenslets.

Daily wearing time was self-reported, with a mean of around 13.5 hours per day, similar across the groups. Children who self-reported wearing the HAL lenses at least 12 hours every day showed 0.99D less final myopia and only 0.28mm of total axial growth over two years.

The highly aspherical lenslet (HAL) spectacle lenses reduce myopia progression by 1D over only two years of wear, limiting axial growth to 0.28mm total, in children who wear them full-time (more than 12 hours per day, every day). This represented a 67% refractive and 60% axial length control effect compared to SV lenses. The lenses were polycarbonate material, with UV protection. Compared to other myopia controlling spectacle interventions, and including all study participants (full-time and part-time wear), axial length over two years was slowed 0.35mm in HAL, 0.34mm in DIMS, 0.21mm in bifocal and prismatic bifocal and 0.18mm in SAL spectacle lenses. These results indicate that full-time wear of myopia control interventions should be encouraged.

Read more about the lens design and this new generation of myopia controlling spectacle lenses via the link.

This was a gold-standard randomized controlled trial1with a short recruitment period (2 months) and punctual follow ups so there are minimal confounders in the results. Axial length and cycloplegic refraction measurement were gold-standard. The wearing time questionnaire was self-reported, but it would be expected that any participant bias here would to be increase reported wearing time, not decrease it, hence the dose-response wearing time finding is likely unaffected.

It is not stated whether and how changes in prescription were accounted for - were the spectacle prescriptions changed if acuity changed by a certain amount?

Long-term visual performance was not reported in this study, but one short-term study has investigated acuity and contrast sensitivity, and the one-year data reported better than 20/20 equivalent mean acuity and adaptation of all groups to their spectacle lenses within 3 days.

Objective: To evaluate whether spectacle lenses with higher lenslet asphericity have a higher myopia control efficacy throughout 2 years.

Design, setting, and participants: This double-masked randomized clinical trial was conducted between July 2018 and October 2020 at the Eye Hospital of Wenzhou Medical University in Wenzhou, China. Children aged 8 to 13 years with a cycloplegic spherical equivalent refraction (SER) of -0.75 D to -4.75 D and astigmatism with less than -1.50 D were recruited. A data and safety monitoring committee reviewed findings from a planned interim analysis in 2019.

Main outcome and measures: Two-year changes in SER and axial length and their differences between groups.

Conclusions and relevance: In this study, HAL and SAL reduced the rate of myopia progression and axial elongation throughout 2 years, with higher efficacy for HAL. Longer wearing hours resulted in better myopia control efficacy for HAL.