The next generation – DIMS and H.A.L.T. technology spectacle lenses for myopia control 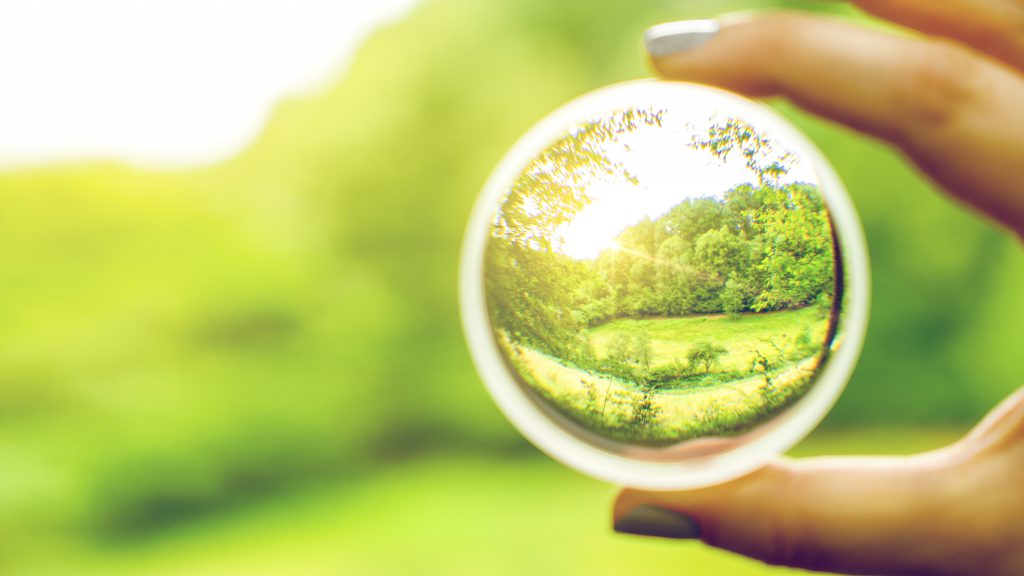 The newest myopia controlling spectacles can both correct and control myopia as well as the most effective contact lens options. This is a highly appealing prospect for myopia control practice, as spectacles are likely an easier place to start, and not all children are ready or willing to wear contact lenses.

Spectacle lens myopia control has now moved on from the earliest days of progressive addition and bifocal options to this new generation of myopia controlling specific designs. These are the product of much time and money invested in research and development.

What are DIMS and H.A.L.T. technology?

Both DIMS and H.A.L.T. technology spectacle lenses take a step beyond the traditional spectacle to behave more like a myopia controlling contact lens. The benefit of a contact lens is that it moves with the eye, so the same optical profile is provided to the central and peripheral retina regardless of the angle of view. This is easy to imagine in the case of a soft multifocal or myopia controlling contact lens, worn on the eye during the day. In the case of orthokeratology, the treatment is 'fixed' through the overnight corneal profile change.

Think of DIMS and H.A.L.T. technology as like a single vision lens for myopia correction, with an overlaying 'treatment zone' for myopia control.

While of course an eye moves behind a spectacle lens, these new lenses can be thought of as 'behaving more like a myopia controlling contact lens' because when the child looks away from the clear central zone, they are receiving simultaneous in-focus information from the single vision distance correction (falling on the retinal plane) and myopic defocus information (falling somewhere in front of the retinal plane).

Perhaps this is why their myopia control efficacy results are seeming to exceed any of the previous spectacle lens solutions, and equaling that of dual focus soft and orthokeratology contact lenses. Let's go further to understand DIMS and H.A.L.T. technology.

How do they work?

When it comes to the theories of myopia control mechanisms, the long standing contender is the peripheral defocus theory, whereby the peripheral retina receives myopic defocus as a slow-down or stop signal for eye growth. This has been shown in animal models - Earl Smith III is arguably the world's leading researcher in this area and you can read a summary lecture of his from 2010, here.

The more recent thought has evolved to the simultaneous myopic retinal defocus theory. Think of this as two planes of focus - one being on the retina to correct myopia, and the other in front of the retina for myopic defocus - which could be anywhere across the retina and not just in the 'periphery'. The latest research on this in animal models, again by Earl Smith and colleagues, has sought to understand where on the retina (eg. how far into the periphery) and how much defocus difference is required. To learn more about this, start by reading the introduction in this December 2020 paper, here.

The DIMS technology works on the concept of creating simultaneous defocus, during both distance and near viewing - one plane on the retina due to the single vision zone(s) of the lens, and one plane creating myopic defocus due to the +3.50D defocus lenslets.1

The H.A.L.T. technology takes this a step further by introducing the concept of a 'volume of myopic defocus'.2  This terminology and theory as applied to human interventions is new to the field, although is cited in the clinical trial paper2  as having a basis in use of aspherical lenses with a power gradient in animal studies. Consider this a shift in theory from simultaneous defocus in two planes (one being on the retina to correct myopia, and the other in front of the retina for myopic defocus) to a three-dimensional 'volume' of defocus in front of the retina of varying dioptric power.

Defocus Incorporated Multiple Segments (DIMS) technology was designed by Hong Kong Polytechnic University. It is described in the clinical trial paper as "compris[ing] a central optical zone (9 mm in diameter) for correcting distance refractive errors, and an annular multiple focal zone with multiple segments (33 mm in diameter) having a relative positive power (+3.50 D). The diameter of each segment is 1.03 mm. This design simultaneously introduces myopic defocus and provides clear vision for the wearer at all viewing distances. There are multiple foci from myopic defocus at a plane in front of the retina, which would be received as blur images on the retina."1

In the two year randomized clinical trial, Hong Kong Chinese children aged 8-13 years with myopia -1.00 to -5.00D and no more than 1.50D astigmatism wore either single vision distance (SV) or the DIMS spectacle lens. After two years (n=160), average myopia progression was -0.41D vs -0.85D and 0.21mm vs 0.55mm in DIMS and SV respectively, representing a 50-60% control effect. The paper reported that 21.5% of children who wore DIMS had no myopia progression over two years, compared to only 7% of those who wore SV lenses.

Distance and near acuity in DIMS was similar to SV at around 6/6 or 20/20. While children with strabismus or binocular vision (BV) anomalies were excluded from the study, DIMS showed no influence on near phoria or lag of accommodation compared to SV.

Essilor Stellest™ is described as comprising Highly Aspherical Lenslet Target or H.A.L.T. technology in this Press Release. The recent publication of the one year clinical trial paper2 describes these spectacle lenses as having "a spherical front surface with 11 concentric rings formed by contiguous aspherical lenslets (diameter of 1.1 mm). The area of the lens without lenslets provides distance correction. The geometry of aspherical lenslets has been calculated to generate a VoMD in front of the retina at any eccentricity, serving as a myopia control signal (figure 1)." The image below is Figure 1 from the open access paper.

The clinical trial paper2 describes the use of aspherical lenses with a power gradient in animal studies as a basis for use of the highly aspherical lenslets. It states that "Instead of focusing light on two distinct surfaces, as in the case of competing defocus lenses, these aspherical lenses deviate rays of light continuously in a nonlinear manner that creates a three-dimensional quantity of light in front of the retina, which we call volume of myopic defocus (VoMD) in this paper. Greater asphericity, that is, a larger VoMD, reduces lens-induced myopia in chicks.", 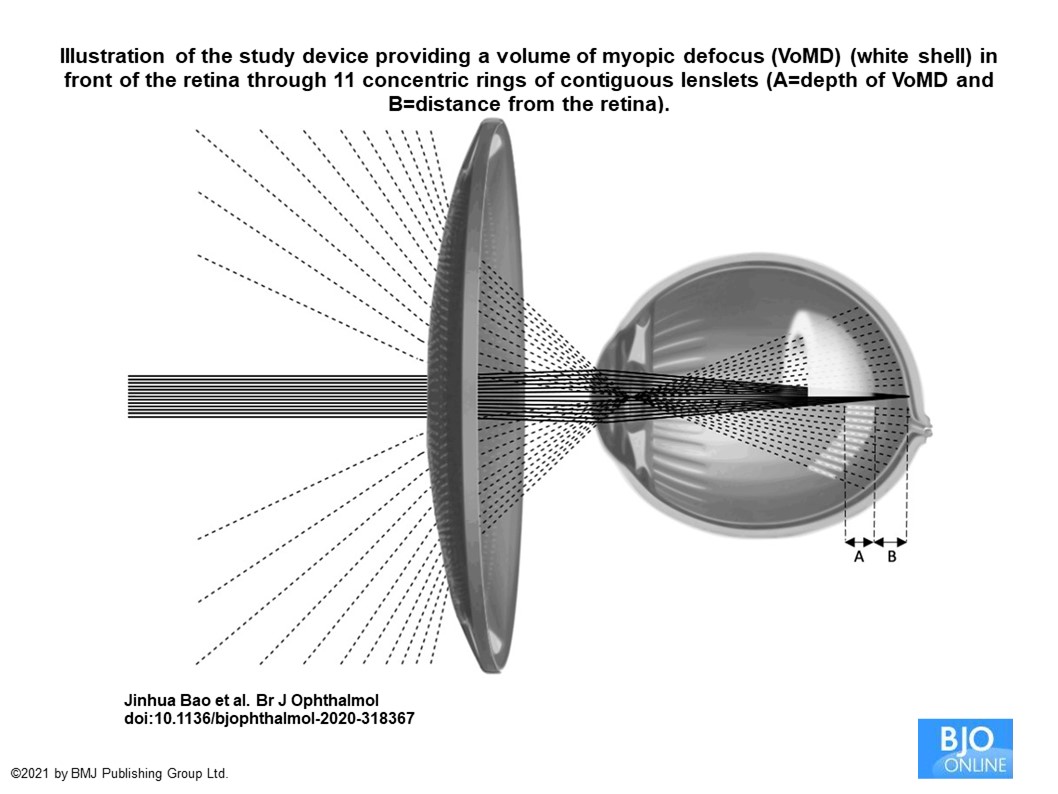 Axial length was stable over the one year study in 28% of the HAL group, 9% of SAL and 0% of SV groups. Distance and near acuity was no different between the groups, being around 6/6 (20/20) at distance and 6/7.5 (20/30) at near. There was no influence of the SAL or HAL lens design on near phoria or lag of accommodation.

How do they compare for efficacy?

Currently we have a one year randomized controlled trial for H.A.L.T. technology and two years for DIMS, both published as full scientific papers. Both have been conducted with Chinese children aged 8-13 years as participants, and with similar baseline characteristics. Let's compare the 6-month and 12-month results as provided in both studies.1,2

In both studies, a single vision distance (SV) spectacle lens was worn by the control group. From the newer study on the aspherical lenslets, we'll take only the highly aspherical lenslets (HAL) group as they had the larger treatment effect.2

What do you see in those results? Let's compare the control and treatment groups. Keep in mind that we can't do direct statistical tests to see if they are different, so we're looking at the means and standard deviations for similarity or not.

In absolute terms, the children in the HAL study - both treatment and control groups - had slightly more refractive progression than the children in the DIMS study, but their axial length progression was similar. From an axial length perspective, the myopia control effect at 12 months in both studies looks similar. Given that axial length measurement by interferometry techniques is about 10 times more accurate than refraction,3 these are the more relevant results.

In relative terms, the percentages are similar. For axial length, DIMS controlled growth by 66% and HAL by 64%. As recent analysis has explained, percentages must be carefully applied only to the duration of the study and not extrapolated further, as percentage treatment effect changes over time.4

DIMS has two years of data available, and as mentioned above two-year data is now available in a research abstract for H.A.L.T technology. Watch this space for further comparisons as more full scientific papers are published.