The Latest and Greatest Research on Atropine 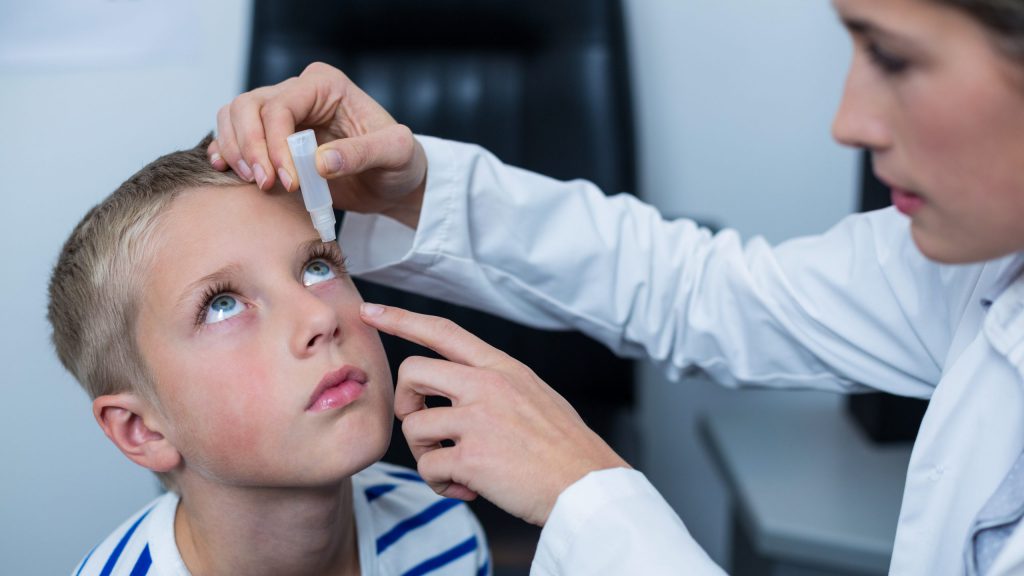 The atropine landscape is constantly evolving as new studies are published, and it can be difficult as a clinician to make decisions about what concentrations provide the highest myopia control efficacy but lowest side effect profile for your patient. Not to mention keeping abreast of all the catchy acronyms! Here is a compiled summary of all of the most recent atropine studies, which you can then apply to your clinical decision making. There’s also some information on trials underway, and finally the STAAR study which is recruiting right now. Click on any of the headings to link to the relevant publication.

Jason Yam, Yuning Jiang and others in 2019 published the LAMP study, conducted in Hong Kong on 438 children. The study was aiming to discover if 0.01% is an effective concentration for myopia control, along with the optimal concentration for slowing progression. It has four proposed stages;

All of the concentrations were tolerated, very few children required progressive addition spectacles (the same across all groups) and there were no medication reported adverse events. This study is only in its first phase though, and as shown by ATOM2 the results can change in the second year. Stay tuned. 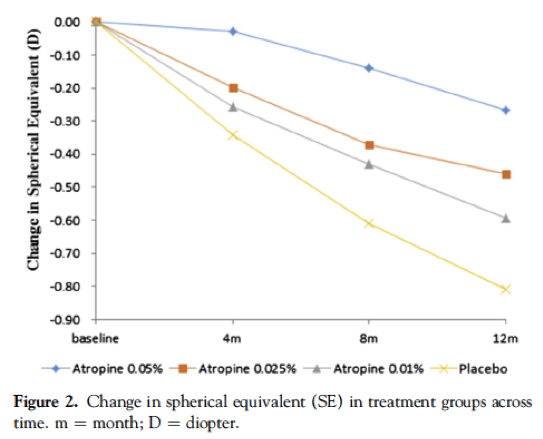 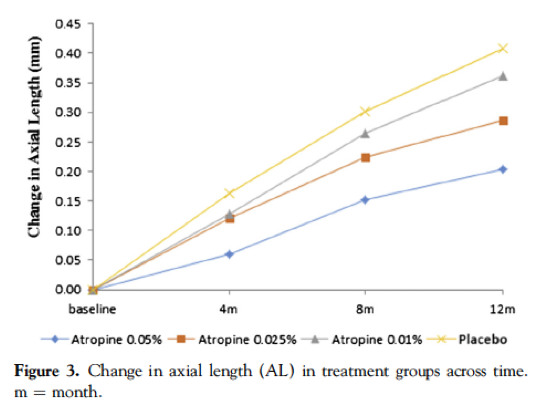 These figures have been reproduced from the paper, which is open access.

Take home message: 0.05% was the most effective, and 0.01% showed no statistically significant slowing in axial length compared to placebo. All concentrations were tolerated including the 0.05%, over a one year period.

Hot off the Press: in fact 'In Press' at the time of writing! In Phase 2, the first year's placebo group was changed to 0.05% atropine treatment for a year, while the children undergoing treatment with 0.01%, 0.025% and 0.05% in the first year continued with the same treatment across a second year. 383 of the original 438 children completed two years of follow up.

Compared with the first year, the second-year efficacy of 0.05% and 0.025% atropine remained similar, but improved mildly in the 0.01% atropine group. For the group changed from placebo in year one to 0.05% atropine in year two, their myopia progression was reduced from 0.82D / 0.43mm in the first year to 0.18D / 0.15mm in the second year. The effects on accommodation (loss of 0.3 to 1.6D amps) and pupil size (increase by up to 1mm) in all concentrations was similar in the second year to the first year - for more on this see our summary blog Atropine -wonder or weak treatment?  Visual acuity and vision-related quality of life remained unaffected.

Take home message: Over 2 years, the efficacy of 0.05% atropine observed was around double that observed with 0.01% atropine. Starting previously untreated children on 0.05% atropine showed a significant result and it was well tolerated in this population of Hong Kong Chinese children.

The authors found that both atropine concentrations reduced accommodative amplitude by around 1.5D and increased pupil size by less than 1mm compared to the control group, but there was no difference between the two concentrations.

Take home message: 0.02% atropine is well tolerated, had a similar side effect profile to 0.01% but showed better efficacy.

The diluted atropine for inhibition of myopia progression in Korean Children

The atropine they used was diluted from commercially available 1% atropine. Interestingly, there was no difference in the effect of the concentrations on pupil size and accommodative amplitude (push up test) - in fact, no significant change in either from measurements taken 'before atropine' treatment. This makes one ponder how stable the diluted treatments were, if no side effects were measured as is typical in other studies.  However there was still a concentration-dependent response - see Table 2 below reproduced from the open access paper - significant differences were found between 'before atropine' treatment and the increasing concentrations seemed to work better, in turn. This is particularly fascinating as the faster progressors were in the 0.05% group by comparison to the 0.01% group, yet had the best myopia control result.

Over the one year study, the myopia progression in the 0.01% was -0.84D, in 0.025% -0.56D and in 0.05% -0.23D. Prior to study entry, children were on average progressing 1.61D per year. There were more adverse events in the higher concentration groups, but not enough to be statistically significant.

Take home message: Hmmm. There's no control group, it wasn't randomized, and comparing a prior progression rate to the rate after treatment, in the same person, is spurious as progression tends to slow with time anyway. It does appear again, though, that the concentration-dependent efficacy of atropine has been demonstrated. 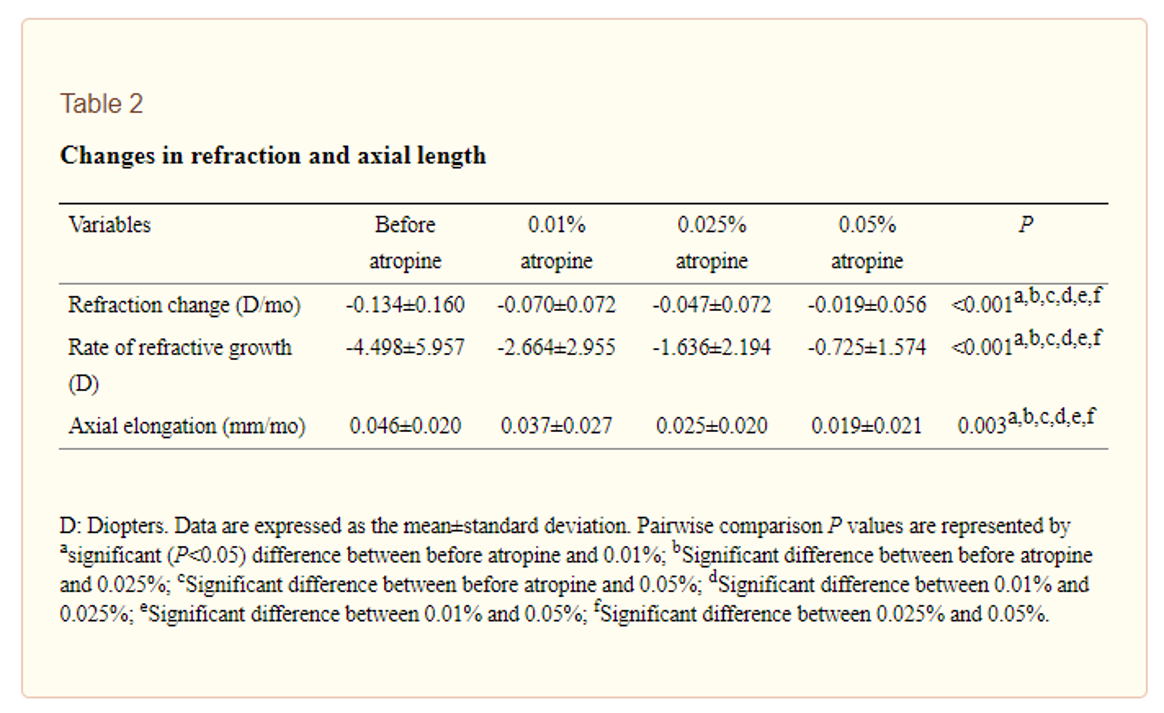 Zhu et al introduced in January 2020 a paper on controlling Myopia with 1% atropine. Concerned with the “rebound” effects demonstrated in the ATOM-5 year follow up, this time the atropine was delivered differently, and reduced in three stages. 660 children were initially enrolled in the study, with myopia of -2.00D to -8.00D.

Initially, phase I, the children received one drop at bedtime, once a month for twenty-four months. In the second year, phase II, drops were reduced to once every two months. Phase III included no drops and the children were monitored for a year. Side effects were treated by progressive lenses with transition. The Atropine did slow the progression, as expected, with the treatment group progressing on average -0.50D over the two years, when the control group progressed almost -2.00D over the study. There was also no “rebound” effect produced during phase III, and the treatment group progressed not only less overall, but during the phase III where no atropine treatment was occurring.

What this means for your clinical practice: This is also a novel dosing regime, with drops only being instilled once a month, which changes our conventional thinking on atropine. The atropine 1% side effects are high, with a large rate of children in the study affected, which will impact part of your treatment decisions if proceeding with 1%, but the convenience of only having to dose once a month is also relevant. This may be an appropriate approach for some of your patients.

Low-dose (0.01%) atropine eye-drops to reduce progression of myopia in children: a multicentre placebo-controlled randomised trial in the UK (CHAMP-UK).

The CHAMP study is currently underway in the UK, involving 289 children aged 6-12 years. In a double-masked study design, children will be randomly allocated to 0.01% or placebo, at a 2:1 ratio, and reviewed every six month. The duration is two years, with the primary outcome of cycloplegic autorefraction, however they also plan on measuring axial length and other parameters. After two years, atropine treatment will be ceased, and a follow up conducted three years later to evaluate refractive error and adverse events. The estimated primary completion date is December 2021.

The Low-Dose Atropine for Treatment of Myopia: By the Paediatric eye disease investigator group (PEDIG).

American children aged 5-13 years will be allocated to either atropine 0.01% or a placebo for two years in this multi-site study. The outcomes for six months post cessation will also be measured. They’ve enrolled 187 participants with the primary measurements being the degree of spherical equivalent refractive error as well as axial length. Inclusion criteria is myopia -1.00 to -6.00, but no restrictions on previous progression. Estimated completion date is September 2022.

The Myopia outcome study of atropine in children (MOSAIC)

250 children aged 6-16 years were recruited in Ireland if they had “progressive myopia.” They were randomised to two groups, 0.01% atropine or placebo. This study will be investigating a proprietary non-preserved atropine formulation developed by Nevakar, in a primarily Caucasian population.

After two years of monitoring, the treatment group will undergo a washout period for 12 months and the placebo group will be assigned to 0.01% atropine for 12 months, in a crossover design. They also intend to follow up past 36 months, depending on initial outcomes. Primary measurement is the spherical refractive error, however they also intend to measure axial length and any potential rebound from the 0.01%. The study is expected to be completed in May 2023.

Study of NVK-002 in Children with myopia (CHAMP)

Nevakar is additionally trialling their new commercially prepared, preservative free low-dose atropine formulation in an American multicentered, randomized, double-masked, vehicle-controlled study. Children 3-17 years old with myopia of -0.50 to -6.00 have been randomly allocated to one of three groups, NVK-002 low concentration, NVK-002 high concentration and placebo. Stage 1 of the trial extends for three years, where the groups are measured for spherical equivalent refractive error. Stage 2 involves random re-allocation of the groups to a second group (except for placebo, who will be allocated to a treatment group). As this is a new formulation/manufacturer the safety and any adverse effects is also being monitored. Study completion date is estimated to be August 2023.

This study is looking at a new formulation of pre-prepared atropine made by Sydnexis, using proprietary technology designed for maximum stability and accurate dosing. SYD-101 is hoping to have a longer shelf life, and higher tolerability than previously tested commercially prepared atropine formulas. 840 children with myopia of -0.50 to -6.00 that are 3 to 14 are being recruited in America. They will be randomly assigned to one of three groups, SYD-101 Dose 1, SYD-101 Dose 2 and placebo. Then after three years, participants will be re-assigned to another group for one year, ensuring the original placebo group is assigned to a SYD-101 group. The primary outcome is looking for myopic progression greater than 0.75D, but also looking at the mean annual myopic progression, time to progression of 0.75D and the mean change in axial length. This study is recruiting currently, with 46 locations across the United States - click this ClinicalTrials.gov link to see a list of sites and a contact email if you want to learn more.

A new trial has been launched in late 2019 looking at the effects of different concentrations of atropine, delivered by a microdosing atomiser. Conducted by the SUNY School of Optometry, and funded by Eyenovia, the study will compare 0.1%, 0.01% and a placebo dose. The atropine will be delivered by a microdose dispenser, which they theorise will reduce systemic side effects and overall tolerance. Children will be given the initial solution for 3 years, then re-allocated to another group for a further twelve months time.

This study may show that a novel dispensing mechanism may make 0.1% atropine more tolerable, and add to our body of evidence as to which is the ultimate concentration of atropine to adequately control progressing myopia. This study is currently accepting new participants, between the ages of 3-12 whom are between -1.00 and -6.00 at various sites across the USA.

Read the rest of our six-part series on atropine 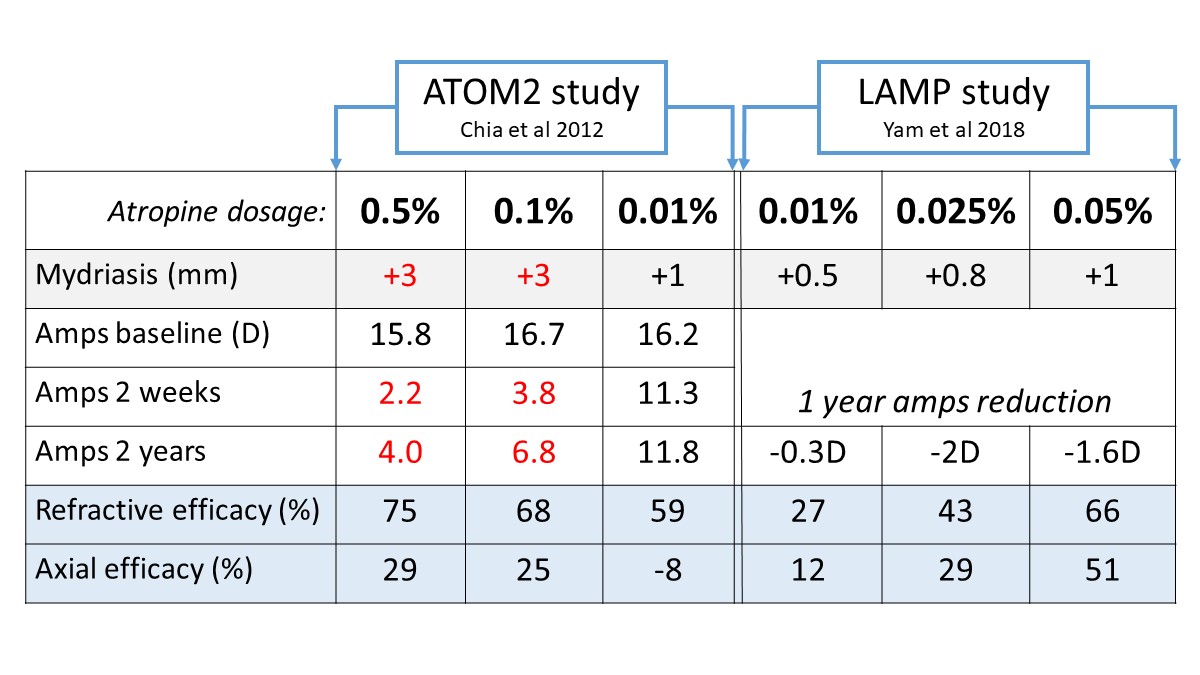 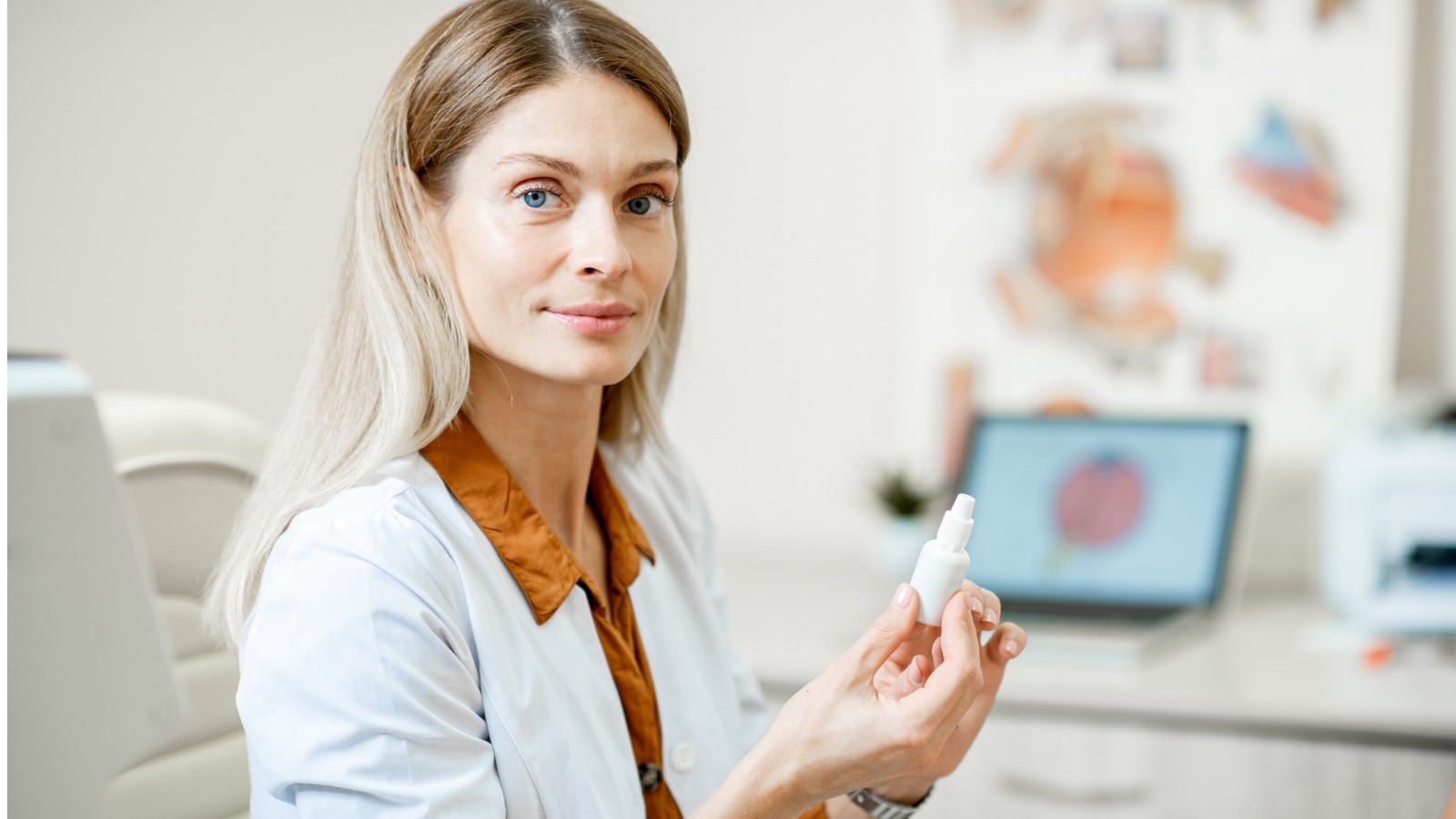 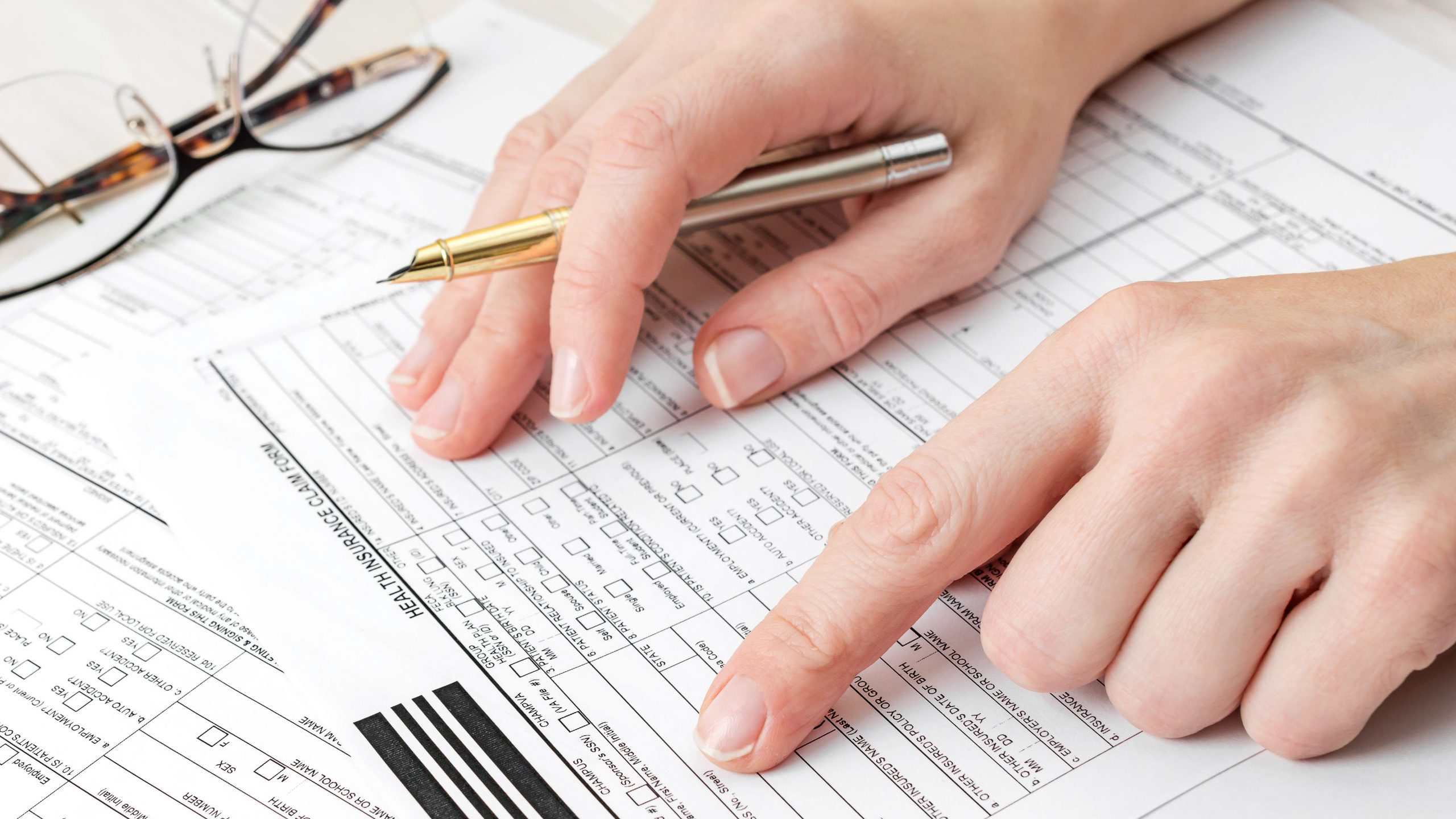 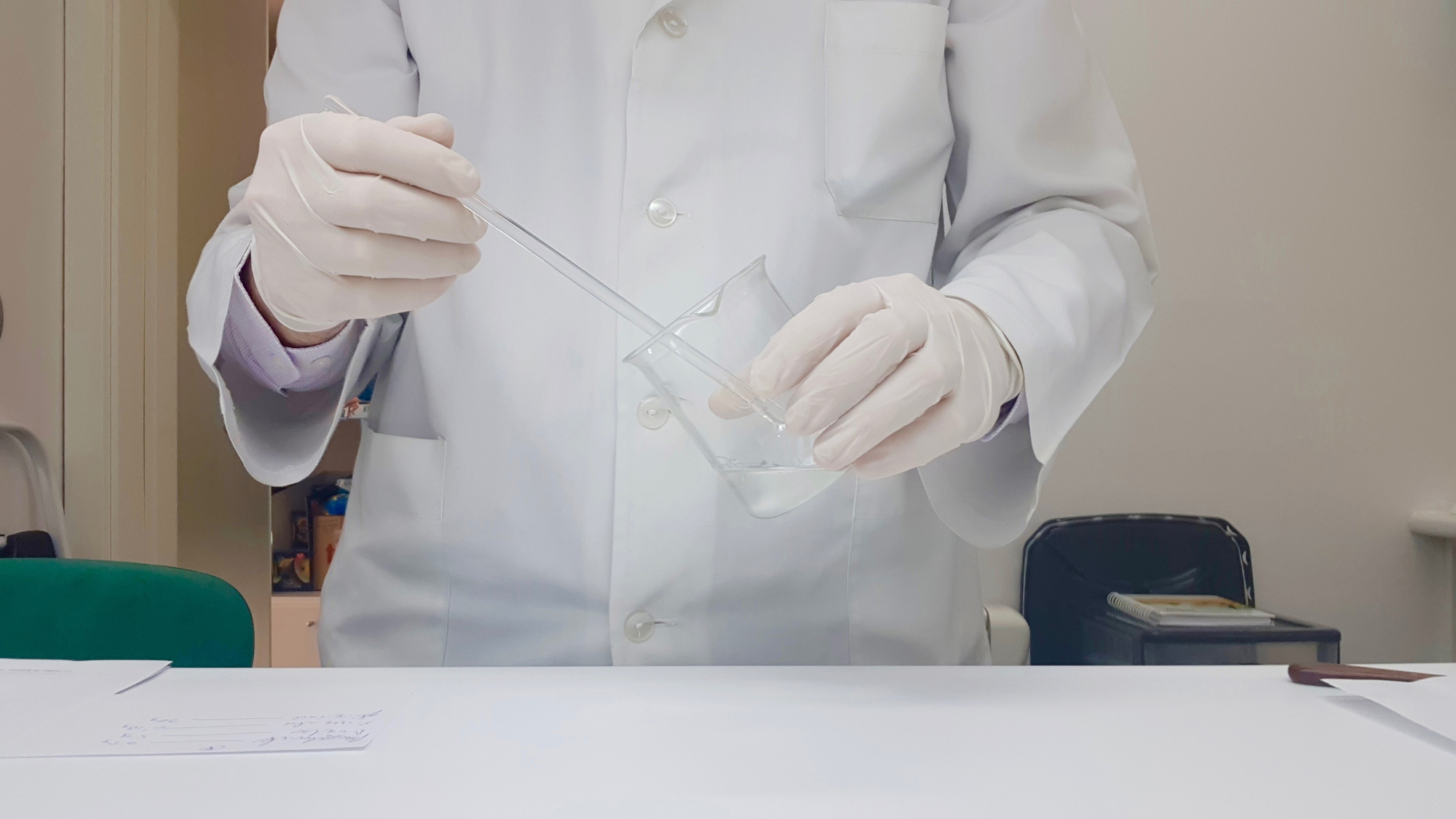 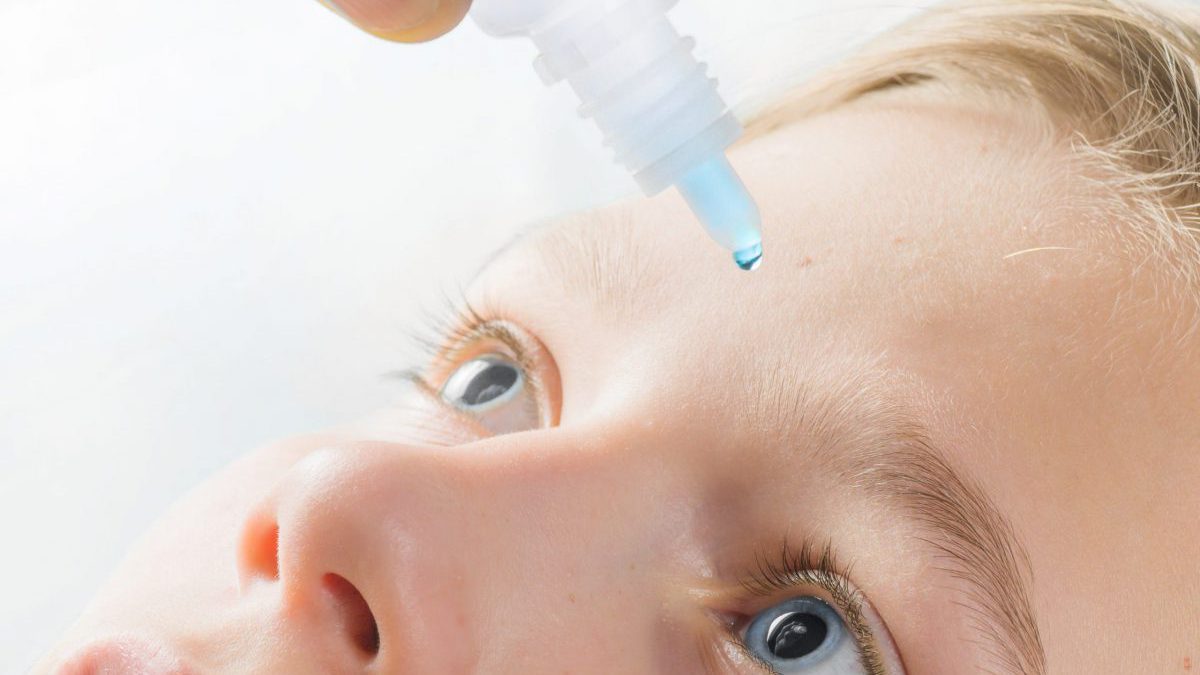 Check out these clinical cases