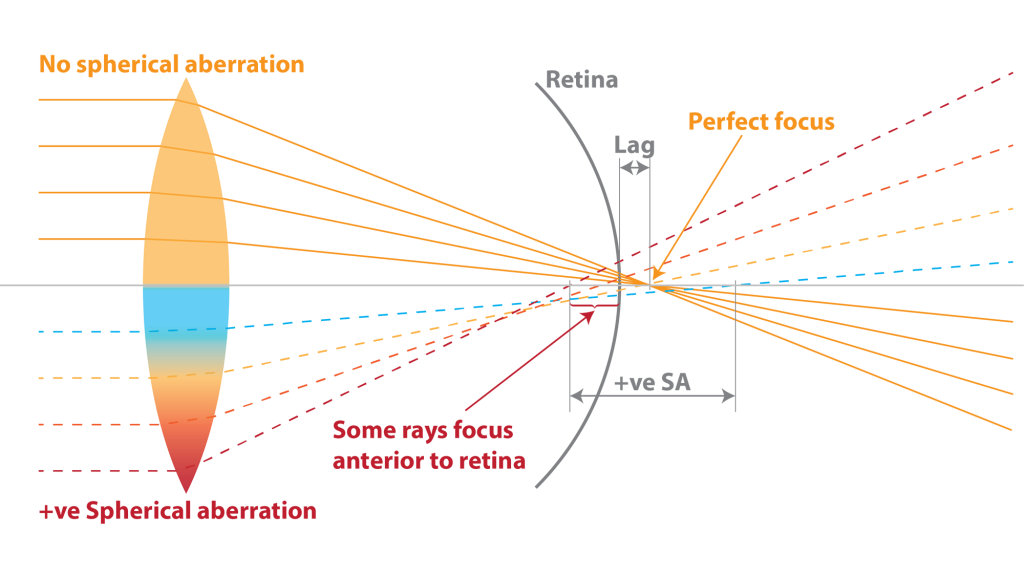 As explained in our blog Understanding Spherical Aberration, the human eye typically has inherent positive spherical aberration when viewing at distance, which can be imagined as a distance-centred multifocal – where peripheral light rays are focussed more myopically (in front of the retina) than central rays. Conversely, negative spherical aberration (SA) can be imagined as a near-centred multifocal, where central rays focus more myopically than peripheral rays. As the eye accommodates, there is an increase in negative SA(1) as the eye attempts to optimize depth of focus for near viewing.

SA is beneficial as it creates depth of focus, allowing for a certain amount of ‘slip in the system’, or inaccurate focus of the eye, while still achieving reasonable retinal image quality. Too much SA, though, as the image becomes so spread by the depth of focus that acuity degrades. We have experienced this in practice where distance acuity can become more challenging to maintain in our presbyopic multifocal wearers as the labelled add power increases. Indeed, it has been shown in children wearing +2.50 Add centre-distance multifocal contact lenses (MFCLs) that they needed on average an extra -0.50 to -0.75D over-refraction more than their best-sphere to achieve good acuity.(2)

Myopic children(3) and young adults(4) have been shown to have lower levels and more variability of SA compared to emmetropes. A greater depth of focus in myopes has been linked with reduced retinal image quality.(5) It has been suggested that higher accommodative lags often seen in myopes(6-8) could be an attempt to improve retinal image quality due to this larger depth of focus.(5) Research has shown a robust correlation between manifest accommodation lead/lag (spherical defocus, a lower order aberration) and the component due to SA (the higher order aberration).(9) If you want to understand more about what lower and higher order aberrations mean, read Understanding Ocular Wavefront Aberrations.

So spherical aberration and accommodation are linked, myopes suffer some problems with both, and both may play a role in myopia control. While centre-distance and centre-near MFCLs are available for presbyopes, we’ve almost exclusively studied and prescribed centre-distance designs for myopia control. We don’t yet know what the ‘ideal’ optical profile might be for myopia control when it comes to SA – perhaps the ability to induce positive spherical aberration in the myopic visual system could counteract accommodation errors which may contribute to refractive progression. Moreover, negatively powered single vision contact lenses typically exhibit negative SA, (13) which could additionally increase accommodative demand in the myope – it has been shown that young adult myopes have larger accommodative lags in single vision contact lenses than in spectacles.(14) How does this all relate to MFCL designs for myopia control?

Orthokeratology and centre-distance MFCL generally induce positive SA. You can read more about orthokeratology and spherical aberration via this link. So is positive SA the goal? Well there is evidence of one negative SA design not working effectively. The Cambridge Anti-Myopia Study (CAMS) evaluated a novel MFCL design which used “aberration control to reduce the lag of accommodation.” It incorporated negative SA,(15) which as mentioned above tends to increase with accommodation – the theory here being that more negative SA would support accommodation and reduce lag; a centre-near design, as is often used for presbyopes. The results showed no effect, but the group of 96 participants were aged 14-22 years at baseline and included refractive errors up to -10D, so their older age and higher myopia could have meant more refractive stability anyway.

But it’s not all smooth sailing for positive SA MFCL designs. A novel design researched by Johnson & Johnson employed positive SA “chosen to negate the negative SA that occurred in myopic subjects during accommodation (based on internal unpublished data)." An effective 'add' value was not cited. In 127 participants aged 8-11 years, they found 65% (0.11mm) less axial progression after 6 months and 39% (0.14mm) less after 12 months. Refractive myopia progression was 54% less at 6 month but there was no difference at 12 months.(16) This mismatch highlights the complexity of axial versus refractive percentage changes.

Johnson & Johnson have continued research in this arena with a soft contact lens ‘simulating orthokeratology’ via positive spherical aberration. In a research abstract presented for ARVO 2020, they evaluated aberrometry in patients wearing the ‘simOK’ lens compared to orthokeratology (OK) treated eyes, and found a similar increase in positive spherical aberration at distance, with both significantly higher than bare-eye measurement (no OK treatment or SCL wear). Results were similar at near, showing increases in near aberrations. However, the simOK lens was shown in an abstract presented at ARVO 2018 to have no efficacy for refractive control and only 9% efficacy for axial length control in a one year study. The authors concluded that given these optical properties are similar but the simOK lens didn't control myopia (while OK does), "additional analysis of off-axis refraction and accommodative response with the simOK lens will be examined."

There’s increasing evidence that MFCLs could influence accommodation in young myopic wearers, where they ‘use the add’ at near and reduce their accommodative response, effectively increasing lag. (17, 18) This effect may vary across lens designs.(19) Spherical aberration also varies across commercially available MFCLs.(20)

The same was true, but shown in reverse, in Johnson & Johnson’s positive SA MFCL. They found that the test lens reduced accommodative response, and this reduced response was correlated with a reduced myopia control effect. Interestingly, this relationship wasn’t found in the single vision distance CL corrected control group,(22) indicating a complex interaction between MFCL optics and accommodation specifically.

The sum of all of this is that visual systems are complex. SA and peripheral refraction and accommodation don’t exist in isolation from each other, and when it comes to myopia control, all could be factoring in to the effect. One factor could weight more for the individual myope than the others; and perhaps for some myopes it’s an entirely different mechanism driving their progression or control, such as genetics or visual environment. The world’s myopia research brains continue to puzzle, theorize, develop and research these topics in an effort to add pieces to the complex picture.

Further reading in our science series on aberrations