Refraction challenges in children – what to prescribe? 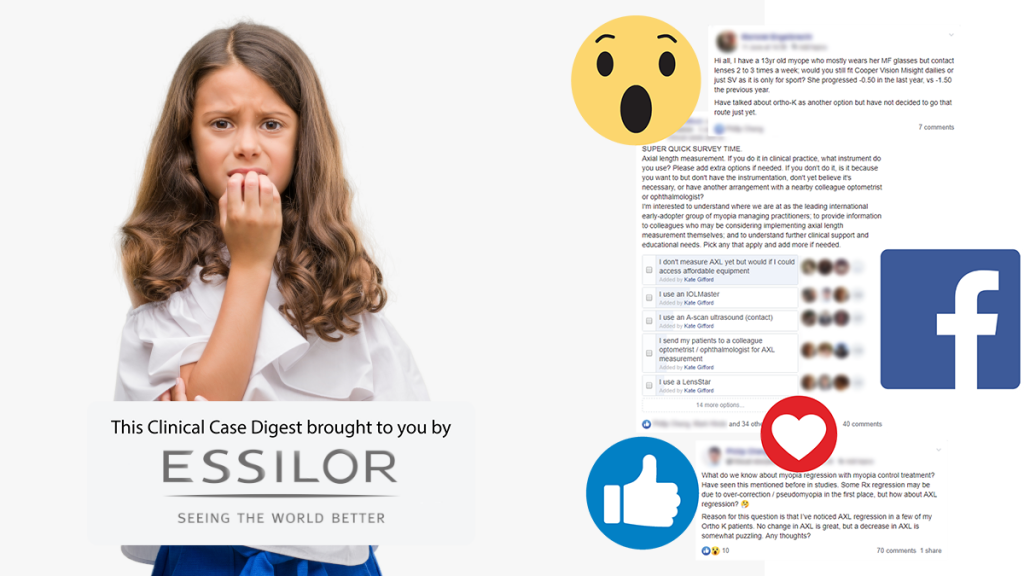 Children can be tricky to refract. Depending on how cooperative the child is willing or able to be, practitioners may find themselves struggling to gain any meaningful subjective or objective refraction results. Refraction challenges in children are explored in this case that SK shared with the Myopia Profile community. This is not a case of a myope, but with more myopia management comes general paediatric management and hence cases such as these. What would you prescribe for a child with such findings?

It is useful to have a mental checklist of clinical considerations in prescribing for children.

1. Is there a risk of amblyopia?

Based on the autorefractor results, the child has significant astigmatism in both eyes. According to Donahue et al, the refractive errors that place for children aged > 48 months at risk of amblyopia are >1.5 D astigmatism, >1.5 D anisometropia, and >3.5 D hyperopia.1 In this particular instance, there is a chance that this child may become amblyopic in both eyes, especially in the right, if this refractive error is not corrected.

2. Which refraction technique is best?

Many commenters concurred with guidelines from professional organizations, as indicated above, that dry or cycloplegic retinoscopy results would influence the decision on prescription. The comments suggest that autorefractors are handy for confirming the cylinder axis, but results for the degree of sphere or cylinder need to be refined by retinoscopy as the autorefractor is less accurate.

How accurate are autorefractors?

These studies indicate that autorefraction is almost accurate as retinoscopy when cycloplegia is used, but is unlikely to substitute for retinoscopy in children under 6 years of age, or those with high refractive error.

The American Optometric Association's Clinical Practice Guideline on Pediatric Eye and Vision Examination (pg 23) states that "autorefraction may be used as a starting point for subjective refraction, but not as a substitute for it; however, retinoscopy, when performed by an experienced clinician, is more accurate than automated refraction for determining a starting point for non-cycloplegic refraction." This was advice for school aged children, from age 6 to 18 inclusive. In clinical practice, it is ideal to confirm the refractive error with retinoscopy. Non-cycloplegic retinoscopy can also give you binocular vision insights as well - such as near lag of accommodation with near retinoscopy.

3. Full versus partial correction - which to prescribe? 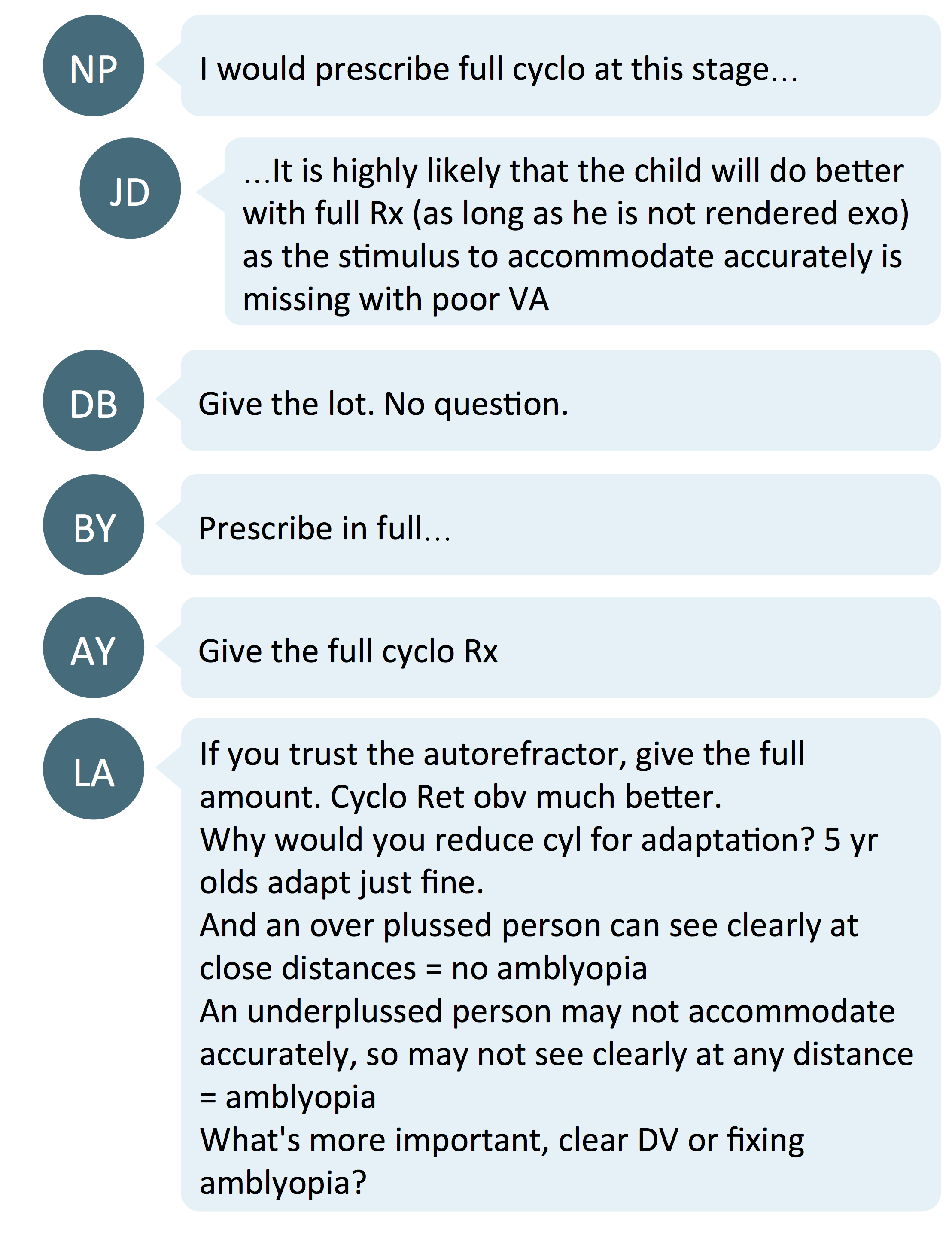 There was a group of practitioners supporting full correction for a few reasons: 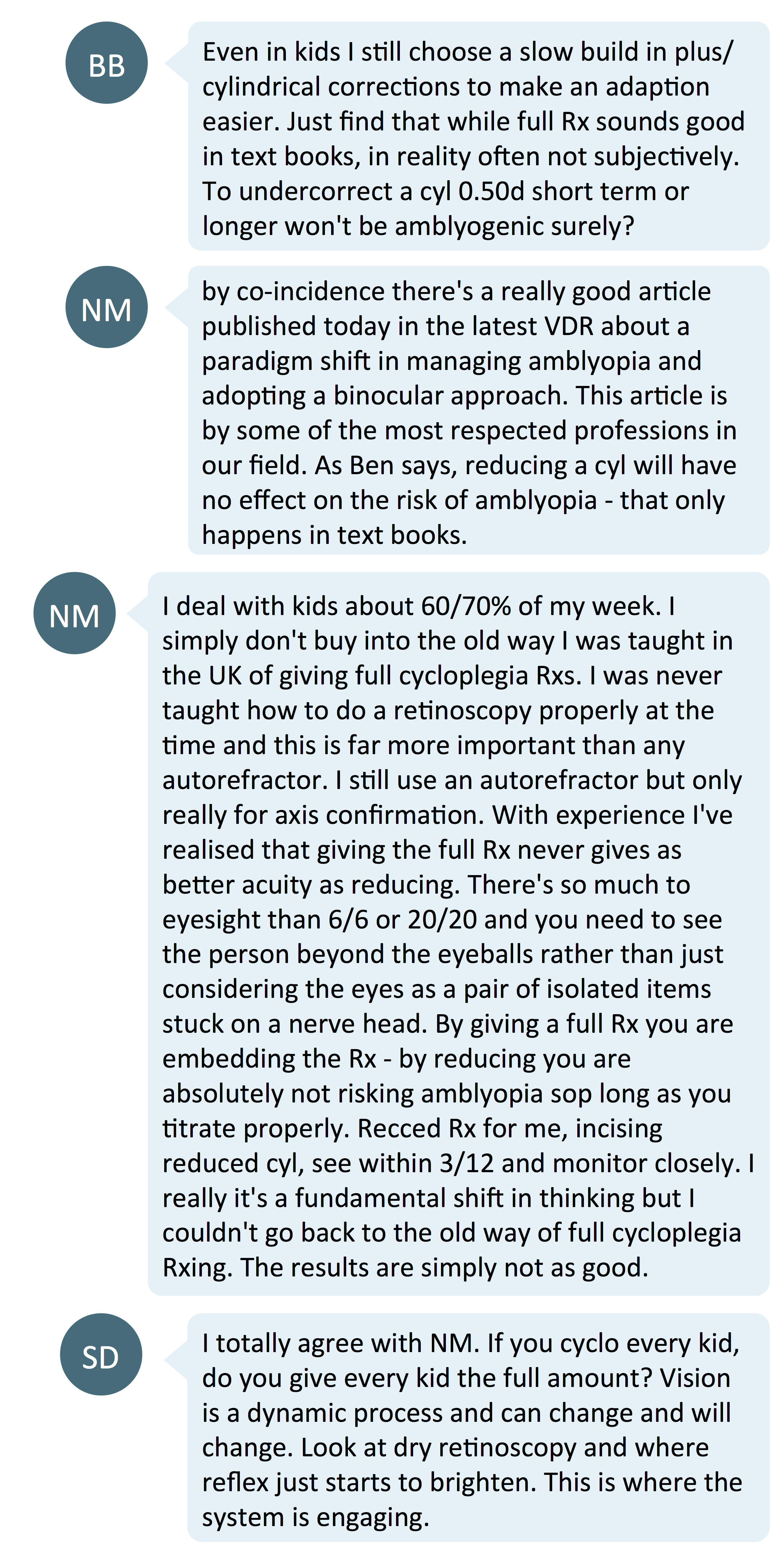 On the other hand, the majority of the commenters would prefer to prescribe a slightly reduced correction for both the hyperopia and astigmatism. A 0.50D reduction in sphere or cylinder is mentioned most frequently in the comments. There was mention of reducing the prescription such that one maintains the circle of least confusion (i.e. reducing 0.25DS for every 0.50DC change).

Commenters’ concern with partial spherical correction is that it may adversely affect the child’s accommodation whereas the concern for partial correction in cylinder is it might allow amblyopia to become more embedded. The main reasons for partial correction are for easier adaptation and that a full cycloplegic prescription may blur distance vision. Susan Cotter’s paper suggests that an optometrist’s decision on how much plus to prescribe in childhood hyperopia often considers the child’s visual function with the prescription, and these include allowing for robust function of accommodation, vergence, stereopsis and near vision.8

What the literature says:

In summary, giving mild under-correction in hyperopia and astigmatism is an acceptable game plan. However, if the patient has esotropia, it is important to prescribe the full hyperopic correction from cycloplegic results; or if adaptation is a significant concern, start with an initial reduced prescription, building up to the full prescription. To read more about thresholds for prescribing in young children (up to 6 years of age), read our blog entitled How to manage the very young myope. 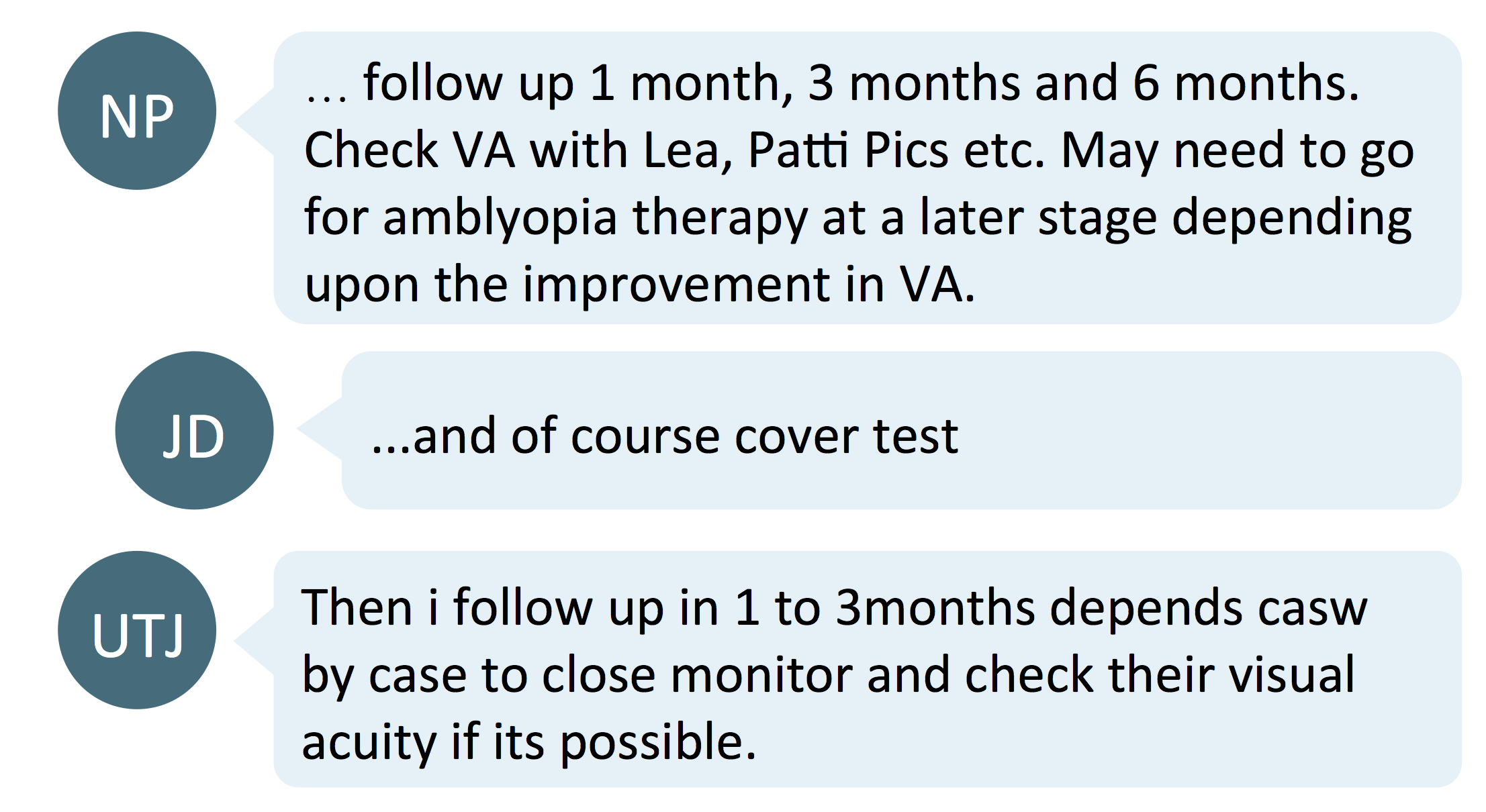 As noted in the original post, the child was reported to only achieve a binocular best corrected acuity of 0.6 Decimal, which is a little worse than 20/32 or 6/9.5. Hence, close follow up is required to monitor improvement and manage any emergent amblyopia. During the follow up, we would need to assess:

Further reading on prescribing for children