Pupils and myopia management: what we know and need to learn 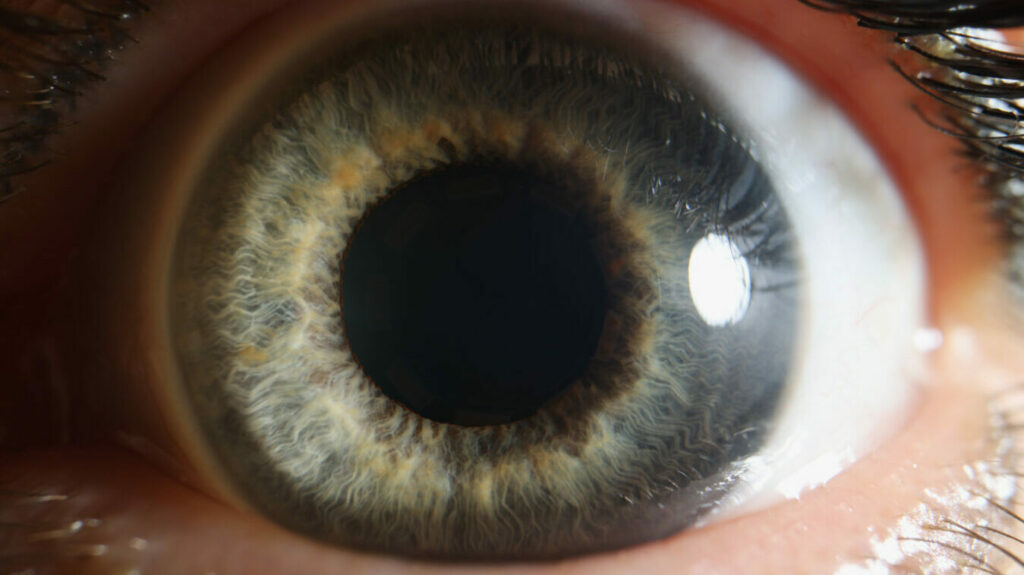 Pupils may be connected to myopia management more than we realize. It seems reasonable to conclude that as the pupil controls the light input to the retina, and we now understand the strong link between focus, light and myopia risks, that the pupil might potentially hold the answers to many of our myopia mysteries. There is, however, still a lot to learn.

A 2020 study on university students in Nigeria found that there was a statistically significant relationship between pupil size and myopia; however they only reviewed 100 myopes aged 18-25 years.1 Another small study in 2009 concluded there was no relationship linking pupils, myopia and accommodation.2 The IMI paper published in 2021 on Accommodation and Binocular Vision in Myopia Development and Progression concluded that the role of pupils in the development and progression of myopia is unclear. While the IMI acknowledged a potential relationship between depth of focus, accommodative lag, retinal image blur and higher order aberrations in progressing myopes, they reported inconclusive data from published studies. Studies are either very small,2 have found no difference between myopic and control groups3 or have contradictory findings on whether emmetropes have the larger pupils or not.

There is a concentration-dependent response seen with atropine and myopia control efficacy, and the same is true for the side effect of pupil dilation. The ATOM-2 Study, which compared 0.5%, 0.1% and 0.01% concentrations,5 found an increase of around 3mm in pupil size for the stronger concentrations but only 1mm for 0.01%. The pupil size exceeded 7.5mm, on average, for both photopic and mesopic conditions with 0.5% atropine, was around 7mm for 0.1% and 5 to 5.5mm for 0.01%. All children in that study were offered photochromatic spectacle lenses - either single vision or progressive addition depending on near vision symptoms. Some 60-70% of the children treated with 0.1% or 0.5% requested progressive addition spectacles, compared to 6% in the 0.01% group.

By comparison, the LAMP Study showed less than 1mm increase in pupil size for all concentrations, being 0.05%, 0.025% and 0.01%. Only 2% of the LAMP participants needed progressive addition spectacles and 5% reported photophobia, that didn’t require intervention. However over one-third of participants were issued photochromic glasses, which were offered to parents concerned about side effects or pupil dilation - the authors note that these may have been taken up for protection against potential instead of realized side effects.4

The table below, from our Atropine for Myopia Management online course, provides a summary of the outcomes and side effects of key atropine studies including the ATOM1, ATOM2 and LAMP studies, as well as a placebo-controlled study on 0.02% and 0.01% (without a nifty acronym!). The asterisks for the ATOM2 study efficacy outcomes are because these comparisons were made to an historical control group at a later time,6 not to a concurrent control group as for the rest. 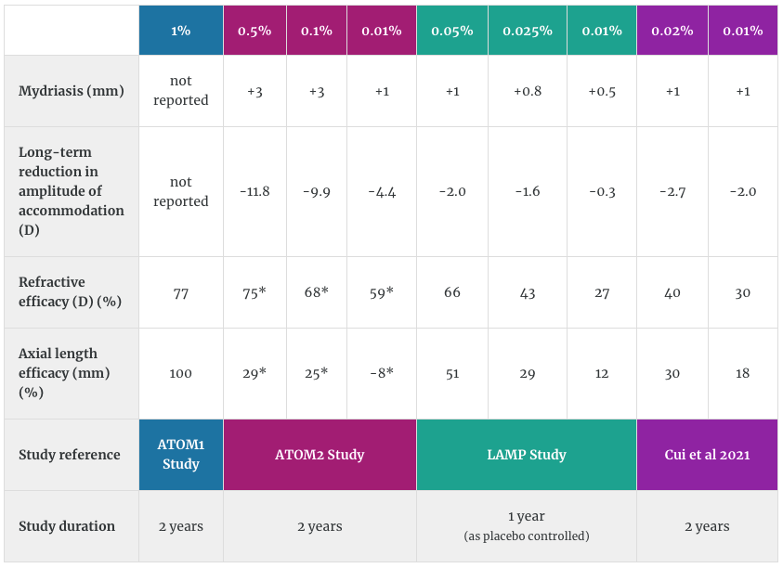 We know that the principles behind the myopia control effect of orthokeratology and multifocal contact lenses rely on image defocus - specifically, creating competing zones of retinal focus alongside myopic defocus to slow eye growth.7 Limited research has been undertaken, though, on how much of the retina should be in myopic defocus, how far peripherally (or how close to the fovea) is important, or the pattern in which the defocus can occur.7 The latest research indicates that the near-periphery (less than 20 degrees) is likely most relevant.8

While it's complex to equate a position on the cornea, though the pupil, to a position on the retina,9 there does appear to be an emerging relationship between pupil size and myopia control in ortho-k. As the pupil diameter increases, the increased retinal area exposed to myopic defocus may enhance the defocus effect of the ortho-k treatment.

One previous study demonstrated that children with a larger pupil sizes have better myopia control in ortho-k,10 with a review suggesting those with larger pupils had 50% less axial length growth.11

The latest data on treatment zone size in ortho-k has found that children wearing a 5mm BOZD lens exhibited only 0.15mm axial growth over two years, compared to 0.35mm in a 6mm BOZD group. Pupil size was measured, but any interaction between pupil size and myopia control was either not present or not reported in this research abstract.

The pupils may hold the key to why a combination therapy of atropine and orthokeratology work better together than either treatment used separately. A meta-analysis from 2020 looked at clinical records of 341 children and found 0.09mm less axial elongation, over a year, in children on dual treatment when compared to orthokeratology alone.12 This may be due to the impact the atropine has on dilating the pupils, enhancing the effect of the orthokeratology. The newest data on this is a two year randomized trial of atropine 0.01% and orthokeratology, which found a similar result of 0.18mm less axial growth over two years. In that cohort, larger pupil size was correlated with slower axial elongation.13

What is driving this combined efficacy? There may be an association between the increased higher order aberrations resulting from a larger pupil size, with some authors reporting a link between more aberrations induced by orthokeratology wear,14,15 and the myopia control effect14-16, while others found no link.17 For more on this fascinating subject, read The Effect of Orthokeratology on Ocular Aberrations by our resident orthokeratology expert Dr Paul Gifford.

Pupil responses and symmetry measurement are part of comprehensive eye examinations, and practitioners may additionally measure pupils in various illumination conditions, especially if a neurological exam is indicated. Adults tend to have pupils that are 4-8mm in dim lighting, and 2-4mm in bright light, with brown irides tending to contract less than blue. Over time and with age, the light reaction can diminish. In children, pupil size increases from infancy to the late teenage years, from around 5mm in infants to 6.1mm in 16-17 year olds, with around 20% of children having anisocoria of at least 0.4mm.18

How does this influence your clinical practice?