Two meta-analysis papers were published in the first half of 2015, both from Chinese research groups. Meta-analysis requires specifying a search criteria which is then followed over a set period of time to include all papers and reports that are caught by the search criteria terms. These papers are then individually analysed for whether they match the inclusion criteria set by the authors. The process typically starts with a large number captured in the initial search, with the majority then removed for failing to match the inclusion criteria. A good meta-analysis will use broad search terms to cast a wide net and have strict inclusion criteria to ensure that only highly credible scientific data remains. By grouping the data from the remaining papers to increase subject number it is often possible to establish effects that were not obvious, or statistically significant, within each paper in isolation.

The authors searched all relevant peer reviewed literature on orthokeratology for myopia control that were published up to Nov 16th 2013. The initial search revealed 461 reports, with 439 excluded as being duplicate, leaving 22 studies, of which a further 15 were excluded either because they lacked sufficient scientific rigour or they were reviews of the literature. Seven papers remained, of which two used a random controlled methodology.

When combined the seven papers resulted in 218 OK wearers and 217 controls. The meta-analysis concentrated on change to axial length to reveal that participants wearing OK lenses had -0.27mm less change in axial length over two years compared to the non-OK wearing controls. There was also remarkable consistency between the individual papers, with 95% confidence intervals indicating an upper and lower range of -0.31 and -0.21mm.

In April Yuan Sun et al published Orthokeratology to Control Myopia Progression: A Meta-Analysis in the open access journal PLoS ONE. The authors cast a wider net than Si et al by using more terms in their initial search criteria to identify 1532 articles, but ended up with the same seven papers that were included for analysis. Not surprisingly they came up with the same outcome of 45% less axial elongation in the OK lens wearing eyes.

The overall conclusions from both sets of authors was that OK slows myopia progression in school-aged children, however there were limitations to their meta-analysis. Two of the included studies used historical controls where intervention groups were not treated and assessed during the same time period. Lack of double-blind study design was also cited, though it is hard to conceive of a study design where both participants and researchers are blind to whether an OK lens or control is being used.

Further research is clearly needed, but until shown otherwise it would appear that OK is effective in slowing progression of myopia in school age children, at least over a two year period.

We have just launched a new online course called Orthokeratology Fundamentals. Specifically designed for the new or near-new OrthoK fitter, this course will guide you through the theoretical and practical foundation to get started with your first few OrthoK fits. With six modules including video and text based tutorials and graphics rich summary downloads, this course will set you up for success and build your confidence in practical, safe OrthoK practice. If you are interested in learning more about OrthoK you can do the first module for free, check out the course outline and enrol via the course page - click the image below for more info. 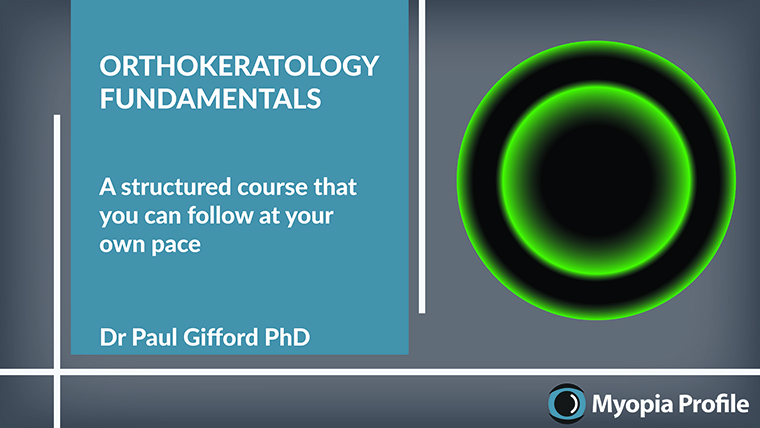 To ensure course accessibly to our colleagues across the world, we have an application-based system for a reduced course fee for participants from lower income (PPP - purchasing power parity) countries. Find out more at the following link.