Myopia Rebound: Back with a Vengeance 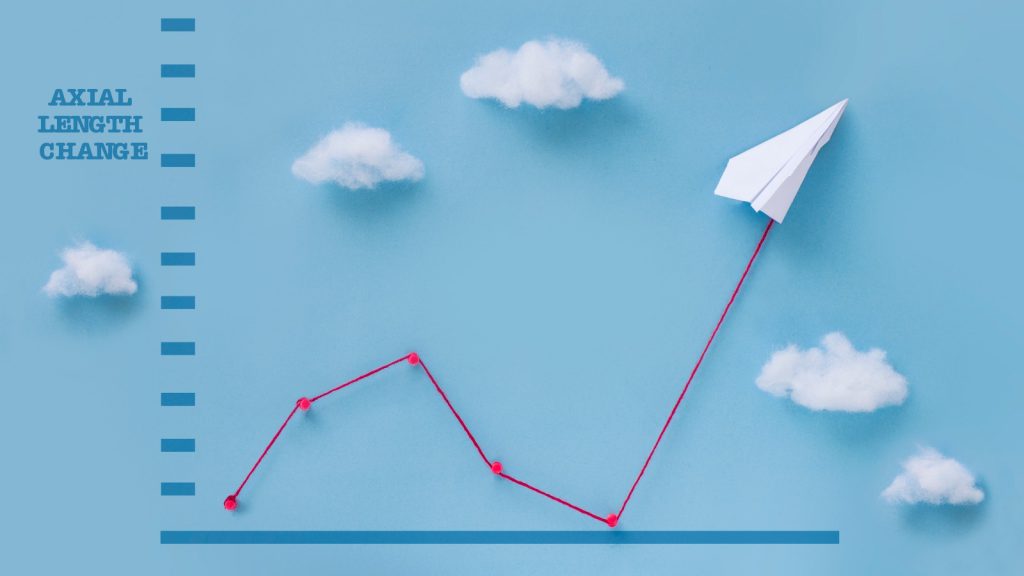 It’s a frustrating scenario - you have successfully slowed down a patient’s myopia progression over a period of time, and are ready to trial withdrawing the therapy. Or, perhaps more likely - for reasons such as contact lens discomfort, allergy to drops or solutions, or simple non-compliance the patient has ceased treatment of their own accord. Then suddenly, the rate of myopic progression accelerates again - a myopia rebound effect. When does this happen? Can you avoid it? What should you consider doing in practice?

What is a rebound effect?

A rebound effect described the sudden resurgence of a condition or problem, once treatment is withdrawn. Whilst myopia treatments are effective, there is concern that once treatment is stopped, the short sightedness can have an unprecedented, rapid change. When the concern is on the negative effects that myopic stretching on the retina, rapid growth may cause further damage. Read further as we explore the potentials of myopia control treatment rebound, and the consequences that has for your management plan and for your patient.

This is one of the most hotly debated myopia issues of the moment. Let's step through some of the current evidence.

Arguably the most well-known atropine studies are the Atropine for the Treatment of Childhood Myopia (ATOM) series. In the first (ATOM-1) study, 346 children were commenced on 1% atropine drops or placebo for their progressing myopia.1 The atropine was very effective, showing around 80% control of refraction and a halt in axial length growth (100% effectiveness) compared to the control group.

After this study, the children were followed for an additional 12 months with no intervention, and here's where the rebound effect was first noted. In this following year, the children who'd been treated with atropine in the prior two years progressed -1.14+0.80D in a year, while the children who'd not had atropine treatment in the first two years progressed -0.38+0.39D in that third year. This reduced the final 1% atropine treatment effect to only 0.25D difference in refraction and 0.23mm difference in axial length (about a 40% treatment effect). The results don't clearly state by how much the 'rebounding' eyes grew in mm in that third year, but comparing results of the two papers indicates the eyes treated with atropine grew around 0.30mm in that third year while the untreated eyes grew by around 0.18-0.20mm.2

In the ATOM-2; study, with two year follow up,3 concentrations of 0.5%, 0.1% and 0.01% were investigated. In this case the results were concentration dependent, but there was no control group - as interestingly, the 0.01% was meant to be the control! What a plot twist that turned out to be! This study didn't look at rebound.

This was followed by the Five-Year Clinical Trial on Atropine for the Treatment of Myopia 2, or "ATOM-2 five year study", which followed these children after the initial two years, where treatment was ceased for a year. This allowed us for the first time to consider that whilst children had good control on atropine, those on higher concentrations rebounded faster: 68% of the 0.05% group progressed at least 0.5D in the year of cessation, compare to 59% of the 0.1% group and 24% of the 0.01% group.4  These progressing children were all restarted on 0.01% atropine for another two years, with overall myopia progression and change in axial elongation being lowest in the 0.01% treated group (two years on, one year off, two years on) compared to those treated with 0.5% or 0.1% in the first two years then 0.01% in the last two years. The final difference was about 0.5D less myopia and 0.1mm less axial elongation in the 0.01%-throughout group compared to the other two groups.

This rebound is demonstrated in the graph below, which is Figure 6 from the open-access paper of the ATOM-2 five year study.4 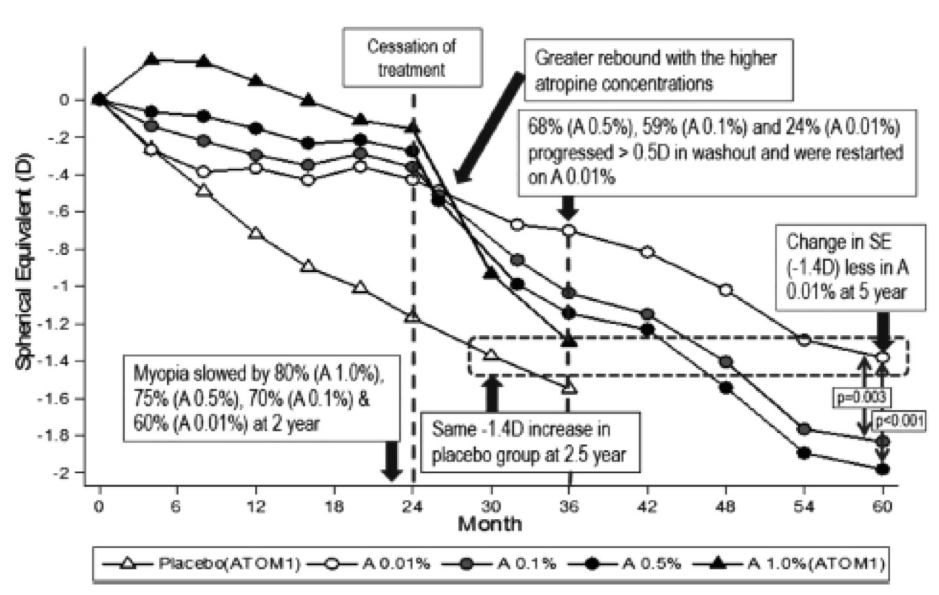 Five Year Clinical Trial on Atropine for the Treatment of Myopia 2 (ATOM2), Chia et.al 2016
Findings from the ATOM1 and ATOM2 studies

What is a true rebound effect?

In the 2009 study on the effect of myopia progression after cessation of atropine the authors Tong et al.2 comments that atropine has two actions - firstly a short term "reversible" action, that may cause the observed minor reduction in spherical refraction in the first few weeks, potentially due to the cycloplegic nature of atropine, especially at 1% concentration. The second, longer term action controls the ongoing refractive change. They suggested that the “rebound effect” isn’t really a push forward of the myopic growth, and rather a loss of that initial cycloplegic effect masking some of the refractive error.

This is an important consideration. If refractive error rebounded without an axial length change, then this short-term cycloplegic effect could be considered the explanation. However axial length seemed to grow faster in the 2009 ATOM-1 rebound study too, by around 0.1mm compared to the control group.1,2

We simply don't know any more than that, at this stage. There's no doubt that refractive control tends to be much greater in atropine studies than the axial length control,3-5 which could be due to a cycloplegic effect on refraction.

What should you do in practice? Consider that abrupt cessation of stronger concentrations of atropine (0.1% or more) will likely cause a rebound effect.2,4 Rebounds haven't yet been studied in the more frequently clinically prescribed concentrations of 0.05% and 0.025%. This is why, in practice, we'd consider a taper for any concentration. The World Health Organisation (WHO) recommends using a taper, even for 0.01% atropine, but doesn’t give suggested regimes.6 A sensible option would be to treat like a very slow topical steroid taper. We give some suggestions for this in our blog When to prescribe atropine for myopia control.

Pauline Cho and others investigated orthokeratology (OK) rebound in a study entitled Discontinuation of Orthokeratology on Eyeball Elongation (DOEE).7 Children aged 8-14 years at baseline had worn OK for two years before half were discontinued for six months and put into single vision distance spectacles, while the other half continued in OK wear. There was also a control group in single vision spectacles throughout.

In the first six months after OK discontinuation, there appeared to be an axial length rebound - the OKd (discontinued) group grew by 0.15mm compared to 0.08mm in the control and OKc (continued) groups. Then after six months, the OKd group commenced OK wear again, and all groups grew by a similar rate of around 0.06mm over another six months.

We would expect progression to decrease with time naturally, but this 'rebound' effect led to the conclusion that OK should not be ceased before age 14.

What should you do in practice? Cho suggests not stopping OrthoK until children are over 14, and in this case monitoring axial length for at least 6 months. OK lens wear can be resumed if rapid axial elongation is observed, as the myopia control effect will be achieved again.7 In practice, OK discontinuation is probably unlikely once a child has developed good habits around lens wear, because of the benefits of the modality.

There's no evidence, simply due to a lack of studies, showing a rebound from dual focus or multifocal soft contact lens treatment for myopia control.

Unpublished data on the MiSight study, presented at the International Myopia Conference in late 2019, described the second phase of the study where after the first three years, all control group children were switched to MiSight wear. The formerly-control group demonstrated the same progression rate as the MiSight-throughout group. That's not really giving you any data on rebound; rather the reverse, as for the DOEE study, that commencing a myopia control treatment after no treatment still results in a comparable effect to that achieved for children of the same age who've been myopia-managed for the years prior.

When to stop myopia control treatments

We've written a whole blog on this for you, covering when myopia tends to naturally stop progressing, considering why you need to stop, and clinical consideration. Read more here on when to stop myopia control treatments.