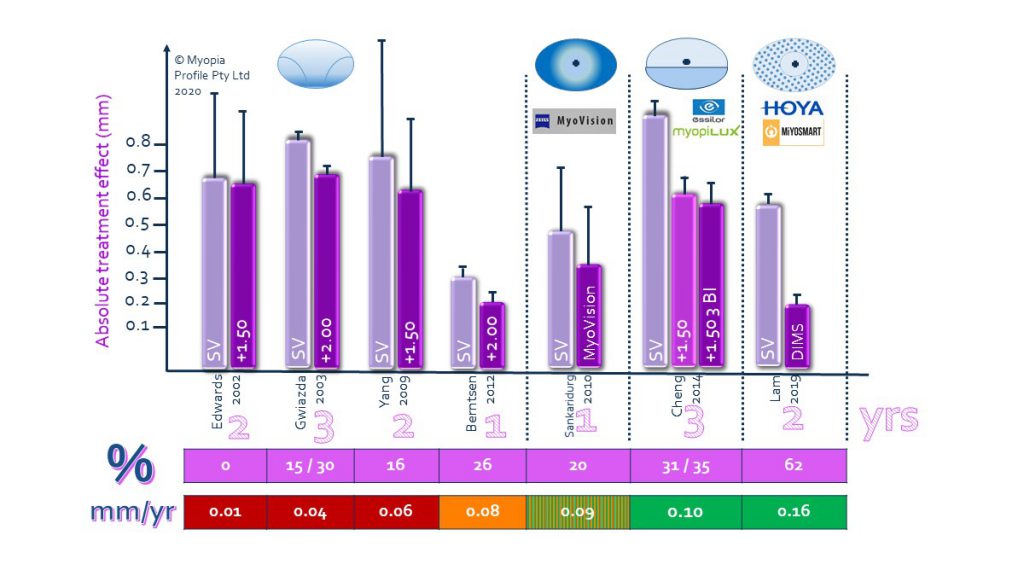 Providing glasses is one of the primary cornerstones of optometry practice, and so the reflex to provide spectacles as all forms of treatment is alluring. But what is the evidence behind using glasses for myopia control, and what's on the horizon? These concepts are investigated in Spectacle Lenses for Myopia Control Part 1 and Part 2.

Bifocal spectacles and progressive addition (PAL) lenses have shown to be somewhat effective in myopia control,1,2 however there is limited evidence wearing progressive spectacles is effective for myopia control in the absence of a binocular vision disorder.3-5 See the Hong Kong Progressive Lens Myopia Control Study (Edwards et al.),  A Randomized Clinical Trial of Progressive Addition Lenses versus Single Vision Lenses on the Progression of Myopia in Children (Gwiazda et al), The effectiveness of progressive addition lenses on the progression of myopia in Chinese children (Yang et al 2009) and A Randomized Trial Using Progressive Addition Lenses to Evaluate Theories of Myopia Progression in Children with a High Lag of Accommodation (Bernsten D, Sinnott L et al. 2012) for more information. These are all summarised in Kate’s beautiful table above, looking at all the progressive lenses.

Peripheral myopic refraction has been well established as playing a role in myopia progression in animal studies, but its contribution to controlling myopia in human children is still under investigation.6 Whilst contact lenses are understood to have good efficacy in controlling myopia progression,7-9 contact lenses sometimes are not suitable for a patient due to cost, personal preference, age or tolerability. The current theory is that of “simultaneous defocus”, the presence of ANY forced myopic plane of defocus, not necessarily only in the “periphery”. For more information read Earl Smith’s update from the GSLS2020.

This has led to a number of companies attempting to make myopia control-specific lenses which are aiming to induce a similar level of simultaneous defocus that multifocal contacts and orthokeratology does. Here is some information regarding the current lenses on the market, and their comparative efficacy. Click on any of the headings for the link to the original research paper.

A 12 month study was conducted on Chinese children for the the MyoVision lens, subsequently commercialised by Zeiss. 210 children aged 6 to 16 years were initially enrolled in the study, planned to span two years. There was a significant difference in the progression of myopia between the children over 12, compared to higher progression in the children less than twelve, which dramatically affected the outcome. Participants were allocated to one of four groups; 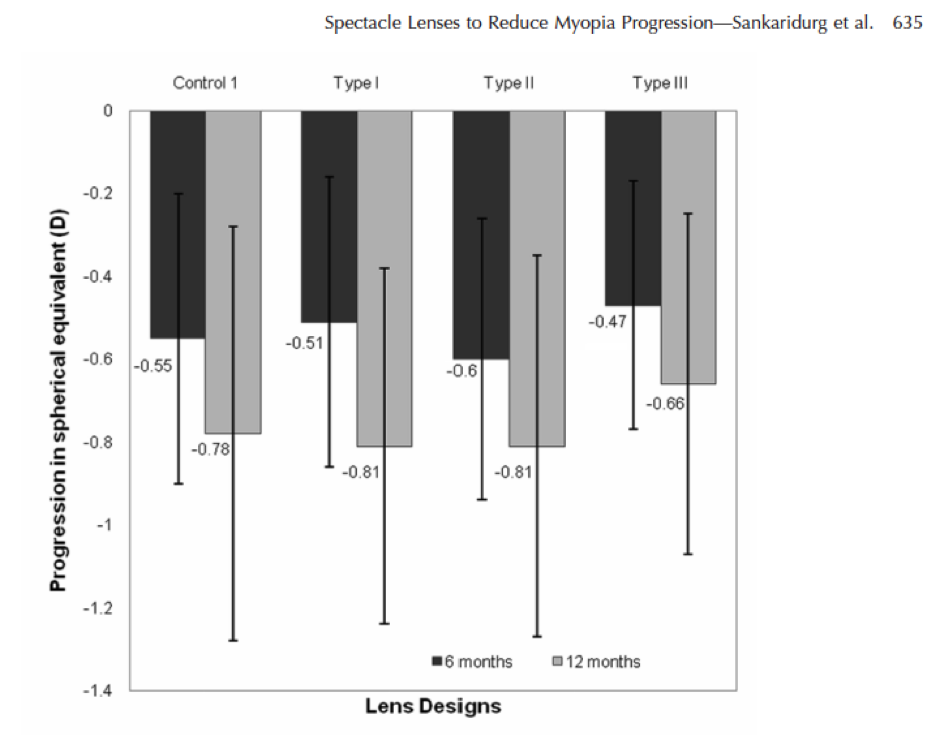 When all the children are considered, there was no statistically significant change between the control lens and the novel lens. When just the younger children, with a family history of myopia are cherrypicked out of the data; there was a reduced progression of 0.29D when comparing Lens Type III to the control lens.

One issue with this study design is there were multiple factors between the lens types. Multiple variances were tested at the same time; symmetrical lens style, difference in central aperture zone, and difference in peripheral myopic defocus induced on the retina. Whilst there was some impact of Lens Type III in the younger cohort, it is hard to tell which of the factors (or all of the factors!) were responsible for the control. The age range in the study was particularly large (a majority of studies seem to have children up to 12-13), which is possibly why the study was abandoned at 12 months. There are a number of factors in this study which should be repeated to confirm the effectiveness. The Zeiss website says the ZEISS MyoVision Design is a “specific design with the goal of reducing myopia progression.”

The bottom line: efficacy of around 20% in Chinese children aged 6-12 with a family history of myopia; being 0.29D lower refraction but no difference in axial length change over 12 months.

Essilor’s answer to the myopia control lens is the MyopiLux. Initially studied in a three year clinical trial of Chinese-Canadian children11, 150 children aged 8-13 were randomly assigned to;

The bifocal lens groups had a significant difference in outcomes compared to the single vision lens, but no significant difference between the two bifocal groups. In this study as well, if a participant had a history of parental myopia the treatment was more effective and the effects were most pronounced in the first year of treatment across both groups.

What makes this study unique, is they then also looked at the relationship between binocular vision issues (measured as accommodative lag) and the outcomes of how effective the bifocal lenses were. If children were grouped as having “high lag” (>1.00D), they had significantly more control from the binocular lens groups (1.10D over three years), but no statistically different outcomes between prismatic and non-prismatic. If they were classified as “low lag” (<1.01D), it was only the prismatic bifocals that showed effective treatment (0.99D), and not the non-prismatic bifocals (0.50D). It also demonstrated how the untreated children with high lag had significantly higher levels of myopia, because as we know, untreated binocular vision disorders can accelerate myopia progression. A key concept with this study is that the use of the BI prism was designed to balance accommodation and vergence systems – not to reduce the response of either system. In a prior study, these authors had tested a combination of adds and BI prism, measuring accommodative lag and exophoric shifts. The +1.50 Add with 3 BI R&L was chosen to ensure that there was no change to either lag or phoria once wearing the bifocal, indicating perhaps a different mechanism of action was at play than altering binocular vision - intrigued? Read more in our Spectacle Lenses Part 1 blog.

To learn more on this, you can also read Four Reasons Why Binocular Vision Matters in Myopia Management for more information, and if the concept of accommodative lag is still doing your head in; read Measuring near lag of accommodation. This may lead you to consider not only aggressively treating children with high accommodation lag, but considering implementing prism in children with lower levels of lag to ensure their binocular vision system copes with prescribing the add. 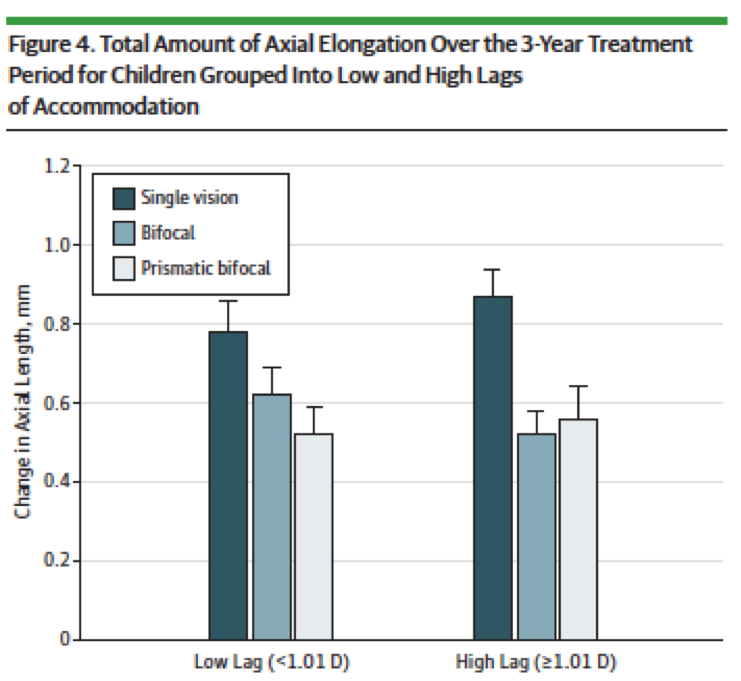 A new lens being commercialised by Hoya, it was recently trialled in a 2 years study conducted on 183 Chinese children. Children between 8-13 years of age with myopia of -1.00D to -5.00D were randomly allocated to either single vision spectacles (SV) or the Defocus Incorporated Multiple Segments (DIMS) lens. Children with binocular vision disorders (amongst other exclusion criteria) were not included. The DIMS glasses have a 9mm centre optical zone, then an annular multiple focal zone with “multiple segments (33m in diameter) having a relative positive power (+3.50D).” This is numerous add lenslets dotting around the outside of the lens. There are multiple sections of myopic defocus, which would be perceived as blur on the retina.

There was a significant difference in outcomes between the SV group and the DIMS group, reported as 52% less myopia progression, and a 62% reduction in axial elongation. Interestingly, they found the greatest treatment effect occurred during the first six months of wearing the glasses, and 13% of children in the DIMS group still had significant myopic progression; suggesting that this treatment may not be effective for all children. The majority of children whom this was effective for were slightly older (10-13), which may also help guide prescription decision making and should be further studied. This is also crucially important, as children with rapid progression when they are younger are more likely to end up with high levels of myopia.10 The spectacle lenses were well tolerated in this study. 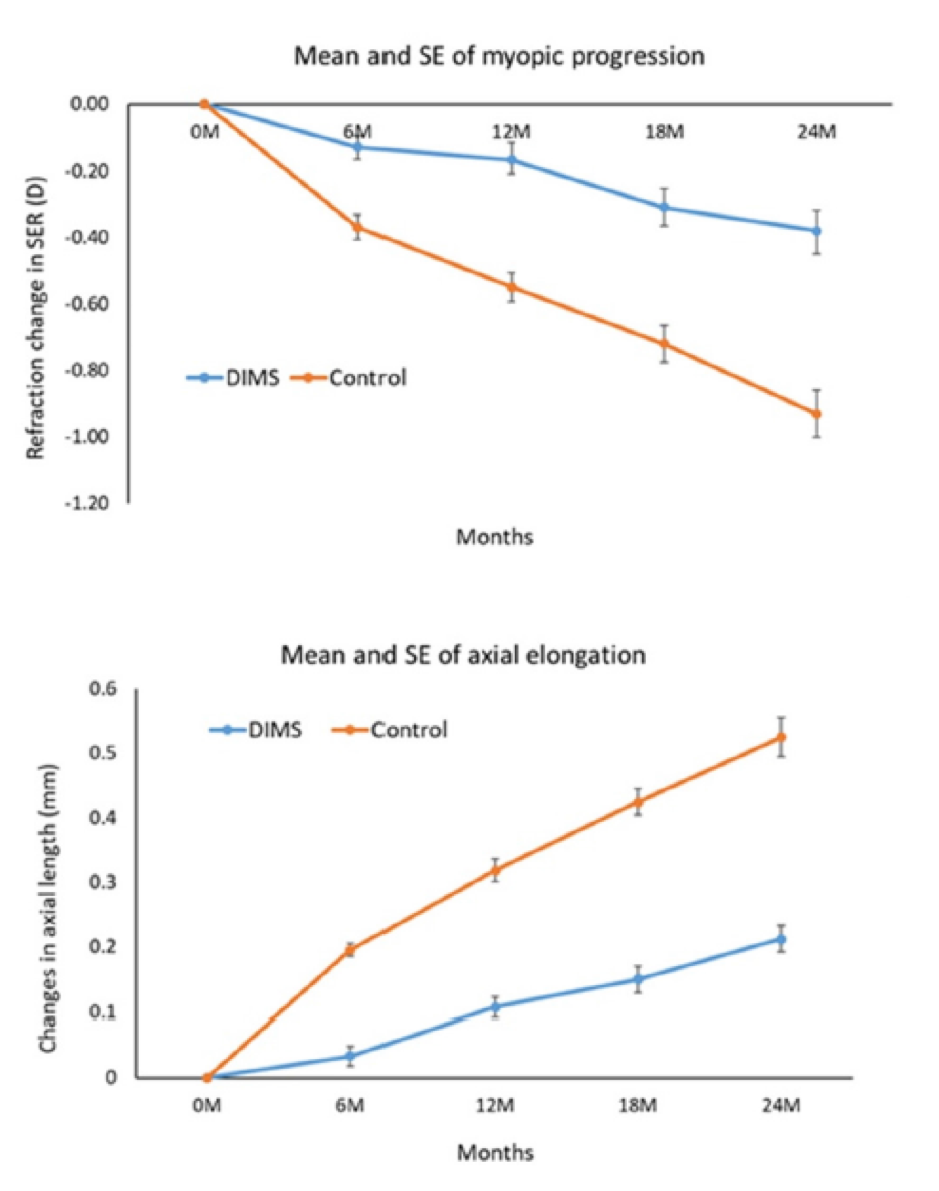 Interestingly, when the two year data was published, Cheng et al released information from where they surveyed the satisfaction with the lenses after 30 minutes of wear, and then after 1 week of wear. They found;

The bottom line: efficacy of around 50-60% in Hong Kong Chinese children; being 0.44D lower refraction or 0.34mm less axial elongation over the two year study.

Coming up in the future

A study is currently recruiting, evaluating the myopia progression control efficacy of defocus incorporated multiple segments (DIMS) lenses and Apollo progressive addition spectacles (PALs) in 6 to 12 year-old children. The patient’s myopia must be between -1.00D and -5.00D. Children will be randomly assigned to either the DIMS lenses or Apollo progressive lenses, and outcomes of refraction and axial length measured over the course of three years. Recruiting is occurring now, either through optometry of ophthalmology referral, until the 30th of October 2020.

The Brien Holden Institute, in collaboration with Essilor International and Hai Yen Eye Care, are conducting a study on myopia progression with a new lens compared to a SV lens. They have recruited 120 participants aged 8-13, and will be comparing the undescribed novel lens to the SV via axial length and cycloplegic autorefraction. Completion is anticipated to be in 2020.

The Personalized Addition Lenses Clinical Trial (PACT) occurring currently is comparing progressive addition lenses (PALs) with customised ADDs, against standard +2.00D PALs and SVLs. They have enrolled 211 Chinese children 7-12, and are determining the ADD value by the highest ADD that satisfied Sheard’s criterion. This should prove an interesting study as it reflects how PALs would be prescribed under standard orthoptic / optometric principles of binocular vision rather than one single add as investigated in most previous studies. If children had an ADD calculated to be higher than +3.00, they were still allocated +3.00. This study was due to be completed in late 2019 / early 2020 and is two years in duration.

Finally, SightGlass Vision, a clinical-stage R&D company focused on myopia solutions, have released some early data from the CYPRESS clinical trial. The study is investigating a novel lens design, aiming to reduce myopia progression. This multi-site study includes 256 children across America and Canada, between -0.75 and -4.00DS from 6 to 10 years of age. They have tested two undisclosed lenses (which clinicaltrials.gov lists as “single vision lens”) against a control single vision lens, with the study planned to continue over 36 months, measuring refraction and axial length outcomes. One year data analysis was mentioned, with the company announcing “superiority of both test arms compared with control lenses.” SightGlass promise 24-month interim data analysis next year, so stay tuned.

So are standard glasses a viable option for my patient?

Yes, progressive addition and bifocal lenses can work; progressives more so if your patient has an accommodative lag. Consider customising the amount of Add and including prism in the lenses in children with normal binocular vision, as per the MyopiLux lens. For children without binocular vision issues, there is a number of exciting new lenses currently entering or on the market for you to consider as part of your treatment options; remembering to customise and discuss all options and effectiveness with your patients and their family.


Previous editions
Scroll back to top