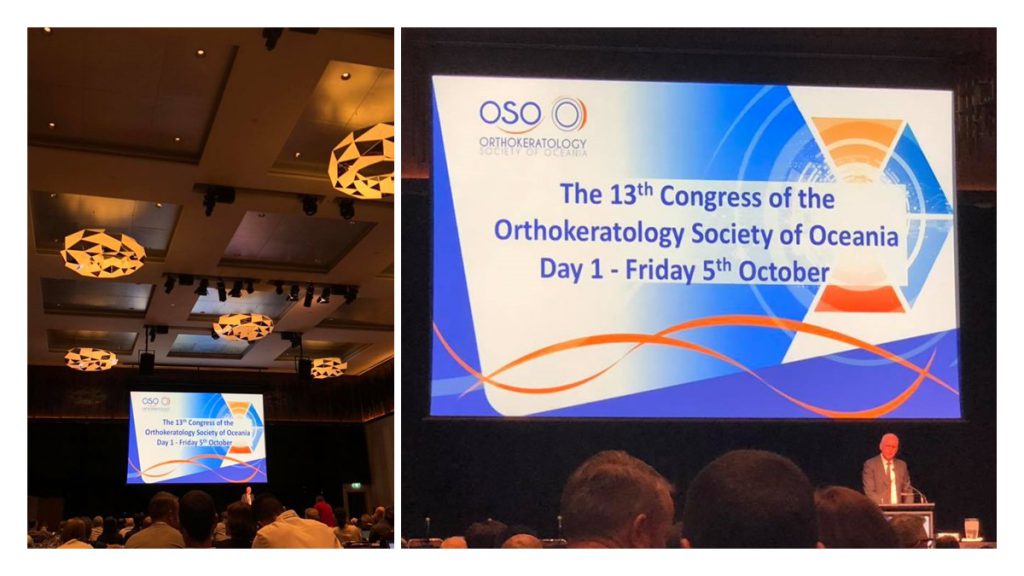 The biennial Orthokeratology Society of Oceania (OSO) conference was held in October 2018 at the Gold Coast, Australia. A highlight of the Aussie and NZ contact lens practitioners' educational calendars, OSO is now attracting an international following and boasted an amazing program covering the latest in OrthoK and myopia control research and practice. Pictured above is long serving OSO President Dr Gavin Boneham opening the conference, and a shot of the light fittings which seemed topically appropriate - do they look a bit like a bullseye topography map to you as they do to me? 😉 Here are a handful of summaries I posted to the Myopia Profile Facebook page during the conference under #OSO2018.

1 - Animal models of defocus and myopia

Professor Earl Smith (University of Houston, Texas USA) opened the OSO 2018 program with a fascinating summary of the animal model research on visual development and defocus. While studies in baby animals sometimes translate to similar results in small humans, and sometimes don’t, Earl provided fascinating insights into mechanisms of our simultaneous competing optical treatments such as OrthoK, multifocal / dual focus contact lenses and even spectacle lens designs. Three important points which Earl made:

2 - Quality of life and number needed to treat in OK

Assistant Professor Michael Lipson (from University of Michigan, USA) discussed the latest in OrthoK. Before his lecture we had a chat about the strong uptake of OK in Australia and NZ compared to what he sees in the US. Why is this? I think we’ve benefited from the OSO holding these amazing conferences for nearly 20 years, to share the leading research being done in Australia by the UNSW Research in Orthokeratology (ROK) group led by Professor Helen Swarbrick and by cutting edge clinician-scientists like John Mountford. The core group of OK fitters in Australia has grown a lot in the past few years as myopia control awareness has grown. Anyway, back to Michael’s lecture!

Dr Vinod Masseedupally from the Research in Orthokeratology (ROK) group (University of New South Wales, Australia) investigated astigmatism and lens centration in his PhD. He found that a corneal elevation difference (CED) of more than 30 microns led to increased decentration of the central treatment zone. Once a toric lens was fit to these higher CED eyes, the centration was like a spherical lens on a spherical cornea again. Future work will investigate the effect of types of corneal toricity (central or limbus-to-limbus) on lens centration. Vinod's earlier work on OK decentration in toric vs spherical corneas can be found here.