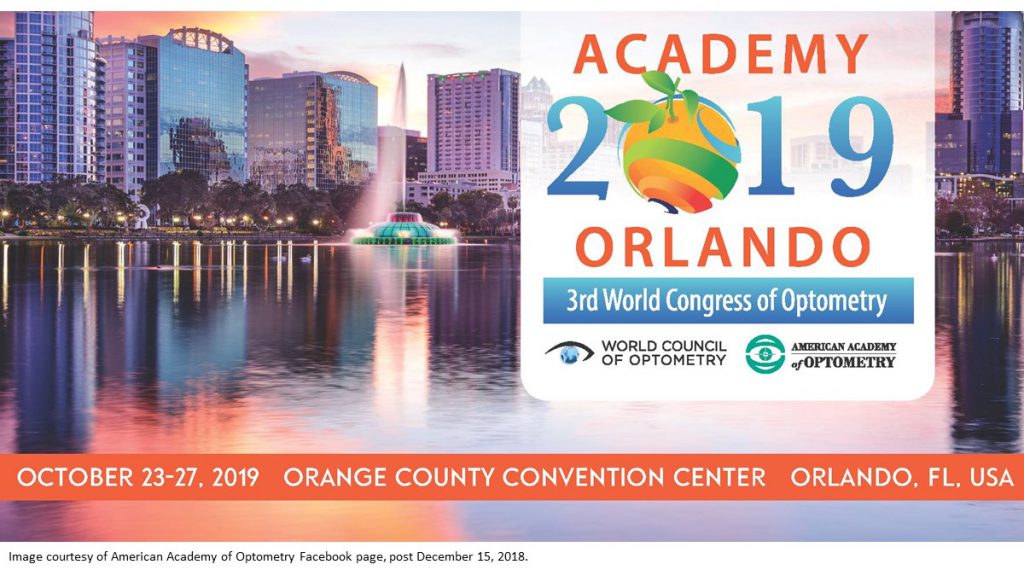 The third biannual World Congress of Optometry and meeting of the American Academy of Optometry was held in October 2019 in Orlando. The following three updates include some of the highlights to come of over 16 hours of fantastic lecture content on myopia.

The following has been edited for this online platform. Myopia Profile would like to thank Sally Dillehay for her fabulous summary of the following session, posted into our Facebook group on October 27, 2019.

Donald Mutti opened, presenting on prevalence, and if one looks at the different numbers within the Vitale et al paper, he believes the US prevalence is most accurately represented by 31%. These figures were reported as 33% previously, therefore prevalence has not increased and is certainly at epidemic levels. Mutti did reiterate that 30% is still high and every myope should be treated, and did show prevalence has greatly increased in Asia and it is worthy of calling an epidemic, or as he stated, "Asia is where the real story is."

Judy Kim presented next mostly on a series of cases, which were very interesting. Extremely high myopia makes surgery difficult as the instruments are made for an AL of 24, and she often has to operate on eyes that are 36 mm in length.

David Bernsten presented on optical control strategies, including the coming spectacle options of DIMS and Sightglass, as well as OrthoK and MFCLs. No hint at the BLINK data, but he stated it finished this past summer and they are working to get it published. Power profiles both with and without MFCLs were presented.

Michael Repka presented on Atropine and went through the 1% ATOM study through to the ATOM3 in pre-myopes as a potential for prevention. He discussed that the FDA declined to approved pirenzipine in 2003 due to adverse events, which occurred in 26%. He then went through the LAMP studies and discussed why did the ATOM vs LAMP show different results. He presented a partial list of low dose atropine studies that are currently underway, most of which involved 0.01% but many were also looking at 0.05% or 0.1%.

Jeff Walline concluded with statements that myopia is a disease and needs to be treated as such. Questions included what to do in a 2 year old with Retinopathy Of Prematurity (ROP) and what to do in a 2 year old with high myopia. ROP myopia appears to stabilize after about 2 years, and therefore no treatment warranted per Repka. Everyone agreed that a 2 year old with high myopia is a very difficult case and no clear answer exists. Dwight Ackerman asked about single vision CLs and spectacles having high amounts of negative spherical aberration, and is it possible that is a cause of myopia? David quoted data by Donald Mutti that showed that peripheral hyperopia really doesn't have much effect on the development of myopia in humans, with a peripheral refraction of 0.6D only equating to 0.0012mm of AL growth. They did both agree that myopic defocus is a very strong signal to stop axial length growth even though they do not believe that peripheral hyperopia is a strong signal for AL growth.

Mark Bullimore countered that the ATOM and LAMP data are completely consistent in that both trials showed that 0.01% did not control AL growth.

Overall everyone agreed that we should be doing something, and doing something was better than doing nothing for myopia progression. Clinical pearl: When you read papers, watch the methods and when the data were collected very carefully as that will often influence the results and provide insight as to why studies often find conflicting results.

Age is the most important determinant in myopia progression

Sharon Chua and others presented data published in high ranking journal Ophthalmic and Physiological Optics. They found that progression between 7 & 8 years of age is over 1D per year, while between 10 and 11 years it's around 0.50D per year. Asian eyes, however, do tend to progress 50% faster than Caucasian eyes.

Myopia may not stabilise in high myopes

Mark Bullimore presented on “when does myopia stabilize?” Looking at the COMET data at a mean age of 16.6 years, there was no difference in progression rate between females and males. However, on average, 50% of 15 year olds are still progressing. Large variability across studies exist due to differences in study design. For every percentage increase in myopia we are seeing a correlating increase in the rates of high myopia. Compared to adults there is higher prevalence of high myopia in current children per given prevalence of myopia, meaning there seems to be an increasing relative amount of high myopia.

Multiple studies in humans have failed to show a relationship between peripheral refraction and myopia development. However all of the studies routinely use cycloplegia, and since near work is heavily implicated in myopia progression, peripheral refraction during accommodation should be studied. What we do know is that the central retina is not the only part of the human eye that is involved in myopia development.

Click here to read AAO2019 Part 3 - getting outside, rebound and barriers to myopia management