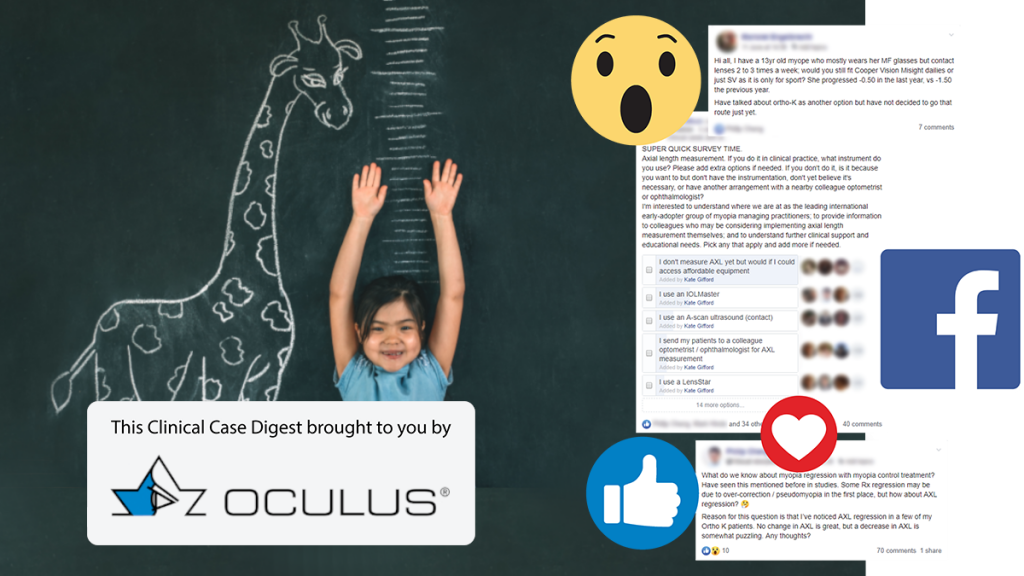 Is axial length regression possible? Here is an interesting post from the Myopia Profile Facebook community discussing a reduced axial length measurement in a child who was prescribed bifocal spectacle lenses.

What could explain a reduction in axial length?

Generally one would expect axial length to elongate with age, especially since even visually normal children exhibit axial elongation of around 0.1mm per year during emmetropization.1 This case suggests axial length regression of 1.6mm measured over 4 months. What reasons did the commenters suggest? 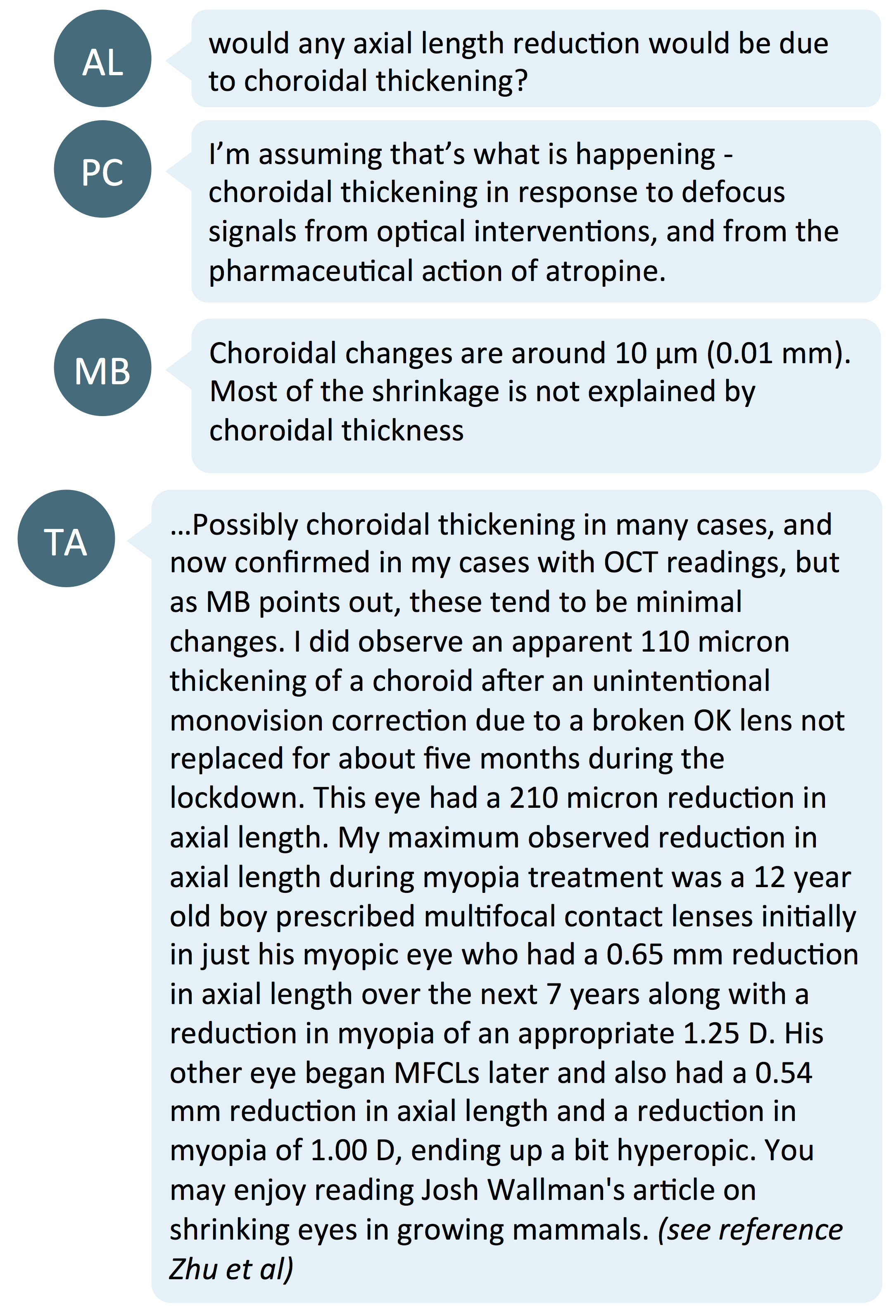 A dive into the literature does suggest that axial length regression may occur, albeit at smaller degrees than what is described in this case.

1. Response to defocus and choroidal thickening

Animal studies have shown evidence that axial length adaptations can occur in response to defocus. Zhu et al (as quoted by TA, above) showed that the eyes of the chick, tree shrew, marmoset, and rhesus macaque can shorten axially when presented with myopic defocus or when recovering from myopia induced by either hyperopic defocus or form-deprivation. Calculations and comparisons to untreated eyes indicated that this could not simply be explained by A-scan ultrasound measurement error.2

In humans, a study in young adults showed that axial length increased (+7 ± 5 μm) and decreased (−8 ± 9 μm) over one hour when hyperopic defocus and myopic defocus were induced respectively.3 This was measured with an interferometry instrument, which is up to 10 times more accurate than A-scan ultrasonography.4 The axial length change was transient, recovering within 20 minutes after defocus removal. These temporary changes in axial length are hypothesised to be occuring at the choroid level.

As an executive bifocal lens has a large inferior portion of relative positive power, which would cast myopic defocus on the superior retina and potentially influence axial length. When looking at the small - 10-20 micron or 0.01 to 0.02mm - changes measured in human studies, the change of 1.6mm reported in this case doesn't appear to align.

2. Other reductions in axial length - atropine, exercise and violet light

While these reasons are not necessarily relevant to this case, they are an interesting journey though the research on shortening axial lengths. Firstly, a recent study in Taiwan showed axial length regression (0.016 mm) and anterior chamber deepening (0.058mm) after one week’s use of 0.125% atropine, presumably due to the cycloplegic effect which resulted in an hyperopic refraction shift.7  Secondly, axial length has been shown to temporarily reduce by around 0.02mm after moderate exercise in both emmetropic and myopic young adults.8

One interesting case study purports that violet light transmitting glasses for one eye resulted in axial length reduction. Violet light is described by the authors as 360-400nm - the range of ultraviolet A and near-visible light - and is cited as 'blocked by most spectacle lenses'. This child was 4 years old, R (OD) -5.75 and L (OS) -9.75 with amblyopia. The right eye was patched 6 hours a day and over two years showed 0.85mm and 1.00D of myopia progression. The left eye wore the violet-light transmitting glasses with no patching and showed 0.20mm axial length and 1.88D myopia reduction over two years. As a case study and with both eyes receiving different treatments, the results are intriguing but conclusions to be drawn are limited.9 Axial length was measured by an interferometry instrument in each of these studies.

Axial length can appear to shorten after orthokeratology (OK) wear. In a cross-over study where one eye wore a standard gas permeable 'day' lens and the other wore OK overnight, the OK-eyes of the 26 children showed a mean 0.02mm shortening in the first six months and then a mean 0.04mm shortening in the GP-to-OK wearing eye in the second six months.10 Another OK study found that a 26um (0.026mm) shortening after commencing OK wear was 70% explained by central corneal thinning and choroidal thickening, but it was transient and returned to baseline within a month.11  This shouldn't affect your clinical measurement of axial length in orthokeratology when comparing baseline measurements to that after six or twelve months of treatment.

Overall, observations of axial length reductions due to various stimuli are in the order of 20 microns, or 0.02mm. So what is the most likely reason for a 1.6mm reduction in measurement between visits four months apart?

The most likely reason - measurement error

PC's comment is right on track here. There are two approaches to axial length measurement - A-scan ultrasonography (which contacts the cornea) and optical biometry or interferometry (non-contact). The IMI Clinical Trials and Instrumentation report4 explains that ultrasonography has test-retest repeatability of around ±0.2 to ±0.3 mm, whereas interferometry is ±0.04 mm. In addition, applanation ultrasound can reduce axial length by around 0.3mm due to corneal compression.12

Take multiple measurements. Most studies take 5 measures of axial length (sometimes up to 10) and take the average as the final reading.

Ensure proper alignment. Off-axis measurement will introduce error - in optical biometry this has been shown as up to 0.03mm13 and could likely be higher in ultrasound measurement. Ensure patient fixation and alignment is correct for measurement.

Take care in higher myopes. A-scan contact ultrasound can show more inaccuracy in higher myopes (over 26mm),13 presumably due to the more prolate retinal shape and even the presence of posterior staphylomas. This case fits the criteria of a high myope with both measurements being over 27mm. By comparison, interferometry instruments appear comparable across normal and highly myopic eyes.14

Read more about different methods and instruments in Choosing an instrument to measure axial length.