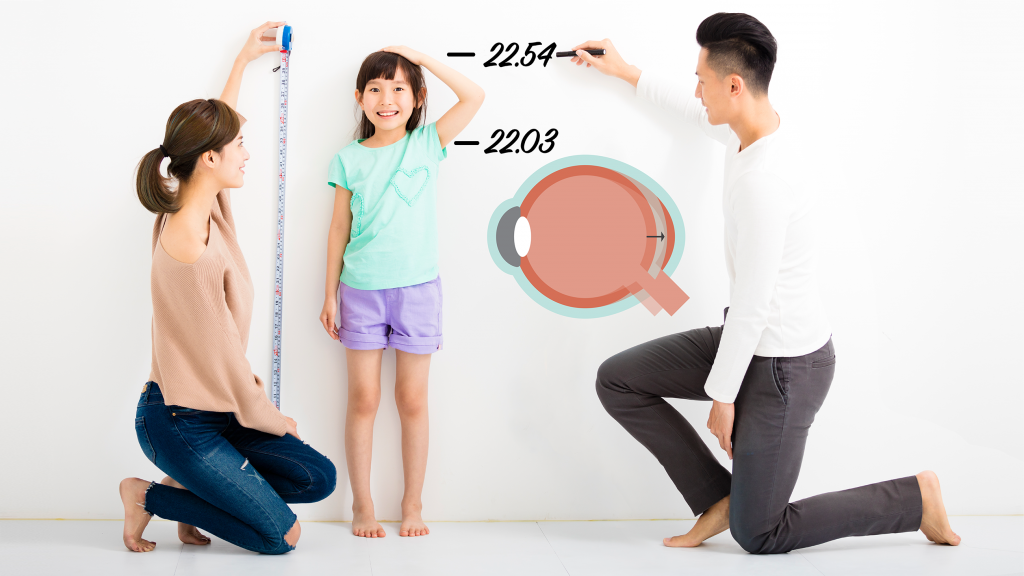 Childhood refractive error is dictated by several factors including parental myopia and how much time they may spend outdoors each day.  The shape and size of the eye constantly changes with growth in response to these factors with axial length most influenced as myopia increases.

This longitudinal study sought to produce a model for predicting myopia development for Chinese children based on axial length percentile curves.  The authors collected data from 12,780 children and were able to show a growth trend in axial length elongation in line with increasing myopia in 75% of the children between the ages of 6yrs and 15yrs old.  The authors found that across all percentiles above the first quartile, the axial length increased with age, had already progressed in the 6yr old children and continued to progress in those up to 15yrs.

They authors concluded that the information gathered from study could be used to predict a likely progression of axial length for school-age Chinese children.

The study aimed to provide a way of predicting myopia development based on percentile growth curves of axial length.

The first group comprised 12,554 children with their data used to construct the percentile curves.  Data from the remaining 226 children was used to verify the growth curve model and to test its predictability.

AL and CR was measured using Haag Streit non-invasive biometer and used to calculate the AL/CR.  Cycloplegic SER was measured using a Topcon auto-refractor. with refraction classified as myopic if the SER was -0.50D or stronger, emmetropic if it was between -0.50D and +0.50D and hyperopic if it was +0.50D or more. Percentile curves were calculated from the data and were grouped into 2nd, 5th, 10th, 25th, 50th, 75th, 90th, 95th and 98th percentiles.

Prevalence of refraction distribution is shown in the table below.

Measurements from the second group, when applied to the developed centile charts, confirmed that girls who were classified as having high myopia by the third visit were within the first quartile at age 9yrs or older at their first visit, and that for boys high myopia had developed in most of the children where AL was within or above the 25th percentile at previous visits.

Diez et al compared their results of axial length to those found by Tideman et al (1) in their examination of European children for children of the same age ranges:

This table taken from the study by Diez et al shows a direct comparison for the difference in ethnicity for the axial length finding between the Chinese and European children.

With the 50th percentile values, there were similar results for the younger children aged 6yrs, but by 9yrs AL was greater in Chinese compared to European children with greater difference by age 15yrs. On the 50th centile, Chinese girls aged 6yrs had AL 22.54mm and the boys 22.99mm, compared to European girls with AL 22.06mm and boys 22.59mm.  By 15yrs old, this had increased to 24.37mm for Chinese girls compared to 23.15mm for European girls and 25.01mm for Chinese boys compared to 23.65mm for European boys.  Despite there being some small gender differences for both the Chinese and European children, there was more of a difference with age for both, leading to the suggestion that axial increase is more age-dependent than gender-dependent.

Axial length is a predictive factor for increased myopia in children.  Using percentile growth curves based on axial length can help in practice to monitor a child’s eye growth and recognise if that growth is within the expected range for their age.  This allows practitioners to identify which children have excessive elongation and what an estimate of their final refractive error may be with no management intervention.

The percentile curves developed from this research can be used as a reliable method to understand the growth pattern of school-age and adolescent children in Chinese populations, and indicate that from age 9yrs axial length is expected to be higher in Chinese compared to Asian children.

Purpose: To produce a clinical model for the prediction of myopia development based on the creation of percentile curves of axial length in school-aged children from Wuhan in central China.

Methods: Data of 12,554 children (6054 girls and 6500 boys) were collected and analyzed for the generation of the axial length growth curves. A second data set with 226 children and three yearly successive measurements was used to verify the predictive power of the axial length growth percentile curves. Percentile curves were calculated for both gender groups and four age groups (6, 9, 12, and 15 years). The second data set was used to verify the efficacy of identifying the refractive error of the children using the axial length curves, based on their spherical refractive error from the third visit.

Conclusion: The data from the current study provide a tool to observe the annual growth rates of axial length and can be considered as an approach to predict the refractive development at school ages.