Could virtual reality be better for myopia than screens? 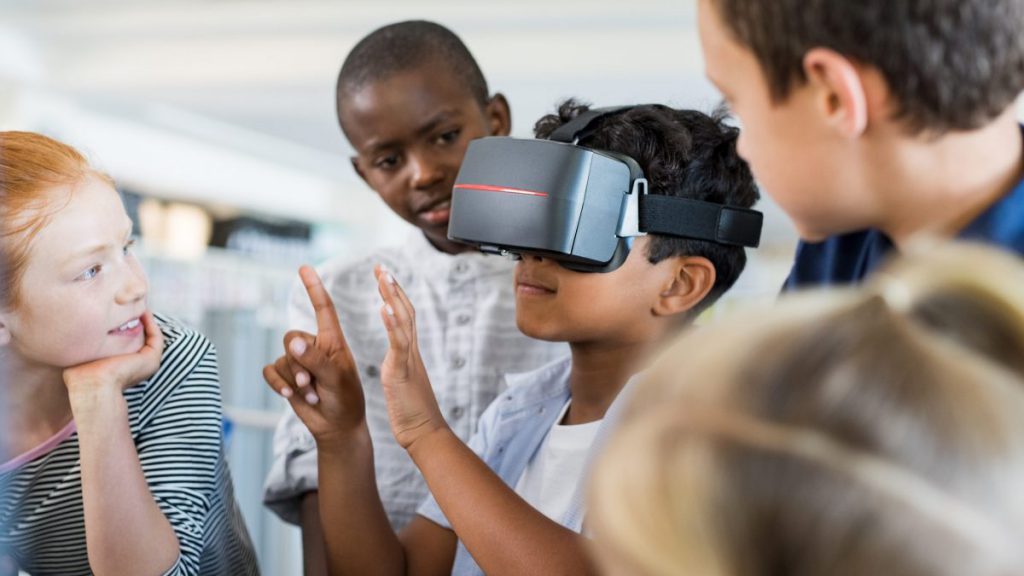 As technology evolves the next big change is likely to be Virtual Reality. Could we expect Virtual Reality to be better for myopia than our screens and smartphones of today? How will the artificially simulated visual environment of VR impact on children's visual development? Let's explore what we know and what we're yet to learn.

There haven't been any longitudinal studies to investigate Virtual Reality (VR) and myopia or its effects on visual development in children. At this stage, only short-term studies on visual functional effects in children1,2 and on oculomotor3 and choroidal thickness changes4 in young adults have been published, which together can be extrapolated to theories about how VR could influence myopia. When viewed together, thus far these studies show mixed results.

Symptoms with VR use in kids

Children may be more sensitive to visual disturbances from VR - the mismatch between vergence and accommodation systems which occurs when vergence is stimulated to change, to give a sensation of depth, but accommodation is held steady.

A study in 2009 evaluated symptoms and oculomotor changes in children aged 5-16 years after 30 minutes of VR viewing. In the 9-16 year old participants, symptoms of "feeling tired" occured in 43% and "feeling sleeping" in 40%, while just under 20% reported "sore/aching eyes" and "difficulty concentrating". All of these resolved within 10 minutes of cessation. Interestingly, the children aged 5-8 years reported no increase in symptoms after viewing and "difficulty concentrating" 10 minutes after ceasing VR viewing. These results, in both age groups, were similar when also viewing a high definition projector simulating a HDTV at a 3.2m distance, which was tested as the 'control' condition. When the teenagers (13-16) underwent a separate 80 minute VR viewing session, these symptoms doubled in frequency but none voluntarily withdrew from the activity - even though almost 70% of them reported "feeling tired" and "feeling sleepy"1 they were obviously enjoying it too much to stop. The authors concluded that this showed VR to be tolerable and safe in kids and teens.

Vision and oculomotor changes with VR use in kids

The aforementioned 2009 study1 found that near unaided acuity reduced in by around 0.16 logMAR in almost 70% of the children viewing both with VR, and this change persisted 10 minutes after cessation. The HDTV viewing also reduced near unaided acuity, in less participants but not in a significantly different amount to VR. Stereo-acuity was reduced in both viewing conditions in 30% of children by 10-100'arc and resolved withing 10 minutes afterwards.

The changes that 30 minutes of VR viewing made to oculomotor function was an increase in the AC/A ratio, a more esophoric distance phoria and puzzlingly, a reduced near point of convergence. After 80 minutes of VR, 56% of the teens showed a 0.5 to 1.5 PD esophoric shift, which persisted 10 minutes after cessation.

A 2016 study2 of 30 minutes of VR time in teens found results very similar to the 2009 study, with an esophoric shift of about 0.5PD at near. Transient myopic shifts were noted in a third of teens, by an average of 0.7D with a range of 0.13 to 2.38D. Most of these myopic shifts were in one eye only. The average time for resolution of this myopic shift was 5 minutes, although one teen's myopic shift lasted over 40 minutes afterwards. There were no correlations investigated between the teen's refractive error and the changes to see if any group was more susceptible.

So it appears VR often causes discomfort symptoms in children and can temporarily reduce near acuity, increase esophoria and create myopic shifts.

On the flipside, VR use in young adults has shown improved flexibility in the vergence system after use compared to traditional computer (PC) game play, which may indicate a beneficial effect.3 In support of this, transient choroidal thickening has also been measured after VR use in young adults, which is a currently presumed mechanism which may indicate a beneficial localised response of the eye to a stimulus protective of myopia.4

Does this mean VR is hard for children and teens to tolerate in the short term, but potentially beneficial in the long term? We simply don't know yet - it's a research area in its infancy.

VR better for myopia - an hypothesis

There is currently one hypothesis paper which discusses how changing the image across the field of vision could change inputs on the peripheral retina, and also how bright illumination close to the eyes could possibly provide a positive stimulus, both of which could potentially protect against myopia.5 As an hypothesis paper, though, there is no research data yet to put this to the test.

Will we use VR as much as smartphones?

As VR becomes more commonplace, it still may not end up moving outside of the home or the classroom, simply because it's harder to walk around with it than omnipresent smartphone.

There's already a lot of information and options available for educational VR and even examples of its use in Australian schools. Even if VR stays in the classroom or living room, the challenge of it competing with time spent outdoors will remain.

The greater potential for the next immersive, omnipresent technology is augmented reality, which mixes the real world (so you can actually see where you're walking) with virtual overlays, data and images. Examples of this are the Google Glass - here's an interesting link to read more about augmented reality.

Will we even need our eyes in future?

I sometimes wonder if we'll all end up like the blobby, boneless humans in the Pixar movie Wall-E, who slurp on nutritional shakes all day long, sitting in mobile chairs and staring at a screen right in front of their eyes. Then I think of the recent movie (and even better book) Ready Player One where humanity plugs into VR to escape dystopian reality.

Extending it further, will humanity get to a point where we don't need our eyes anymore? Will the kids and adults of the future eventually just be plugged brain-first into our technology, Matrix style? (As I found out when writing this, if you google 'are we living in the Matrix' there's a whole rabbit hole of mind-bending further reading!)

Things to ponder. The upside of Virtual Reality and Augmented Reality at this stage, though, is that eyes are still needed so eye care is needed too! The bottom line is that children using any devices will benefit from regular eye exams to ensure their visual comfort and normal development.