Combining atropine and orthokeratology for a fast progressing myope

Both orthokeratology (OK) lenses and low-concentration atropine are effective forms of myopia control.1,2 Could we expect a greater efficacy to control myopia if we combine the treatments? In this post, LH is considering whether to start a young patient on a monotherapy or go straight to combination treatment. Here is the original post. 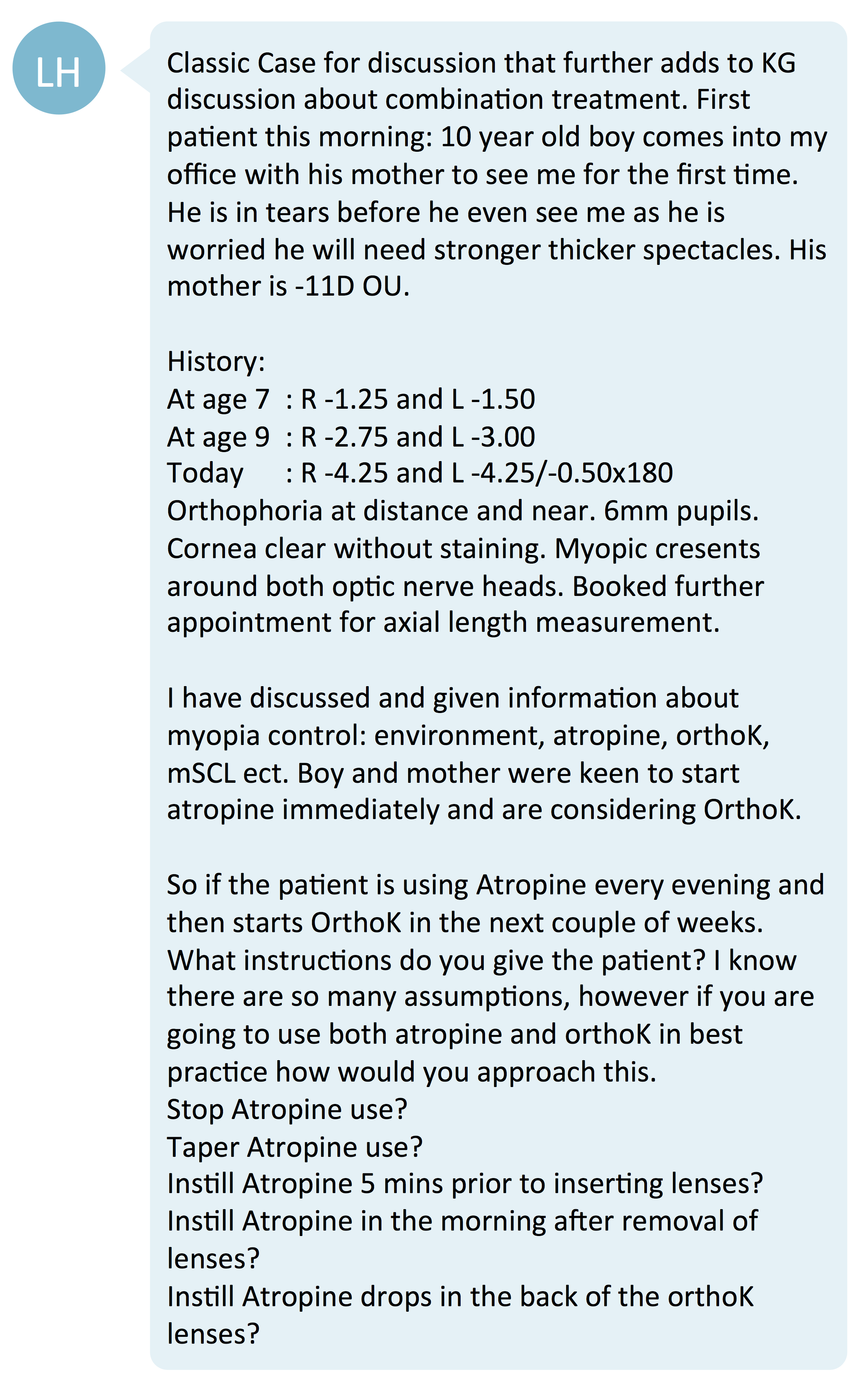 To combine or not to combine treatments? 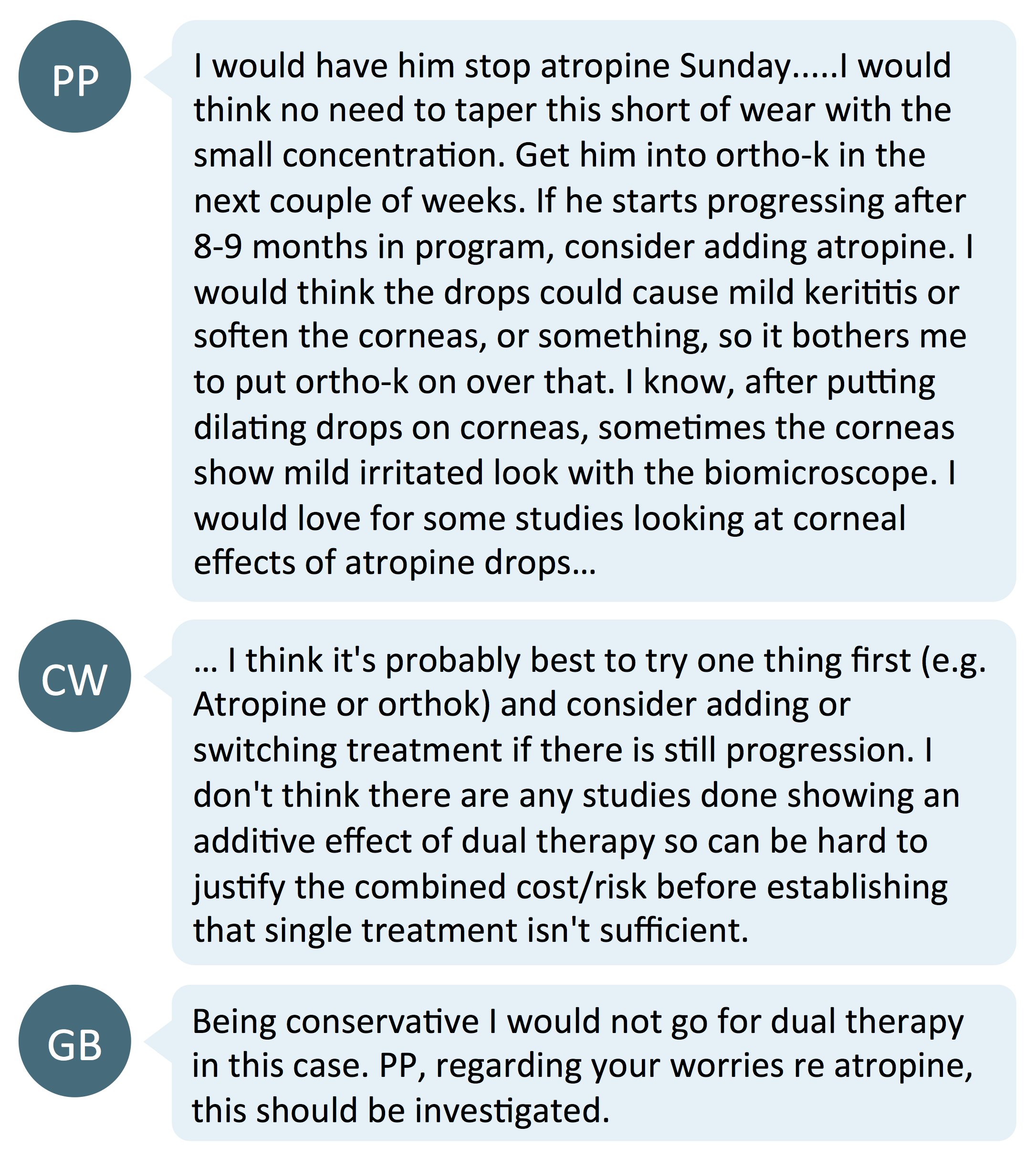 This case was presented prior to scientific publications on combining atropine and orthokeratology, hence some commenters expressed concern about the evidence base. This is still a fair comment as we only have a handful of studies now indicating an additive effect by combining orthokeratology and atropine. Thus far, the ideal concentration and ideal targets for dual therapy are yet to be determined - early indication is that 0.01% and lower myopes of 1-3D may be the answers, respectively.3,4

There is also merit to the commenters’ opinions to start one treatment first to determine its myopia control efficacy, before adding an adjunct. This indicates consideration to safety, as additive treatments could also increase the risk of complications, for example irritation from preservatives in atropine increasing risk of a contact lens adverse event.

What do we know about combination treatment efficacy?

Recently published studies do suggest that combination treatments control myopic progression better. Here is a brief outline of the handful of studies with data over 12 months or longer.

What time of day should atropine be used? 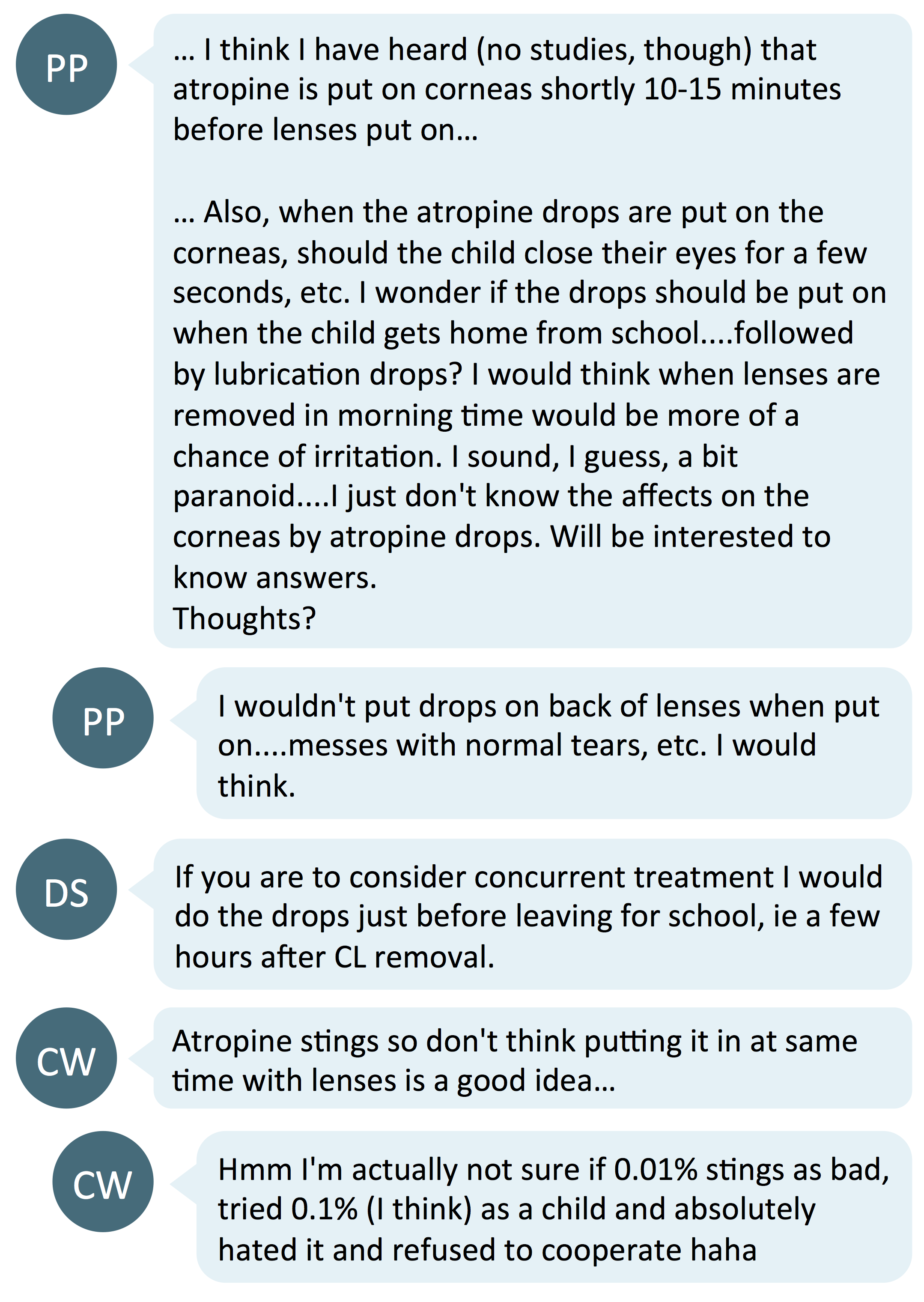 There was also discussion around the appropriate time and method to instill atropine drops, especially within the context of utilizing OK lenses. Currently, there are no guidelines for using low-concentration atropine drops with myopia controlling contact lenses.

Side effects appear to be minimal

Ocular surface exposure to preservatives in the atropine drop, such as BAK, is more likely the larger concern of combination treatment than the cycloplegic and mydriatic side effects of atropine interacting with OK treatment. Kinoshita et al6 (diluted atropine with BAK) found SPK in 2/43 of the combination group and 1/37 of the OK only group which worsened over time and required discontinuation of OK and switching to spectacles. Tan et al5 (preservative free single use atropine) reported 1 case of bacterial conjunctivitis in each group which recovered with a week out of OK lenses and topical antibiotics. Neither group reported other adverse events or allergies related to atropine or OK use.

When to instill atropine

The peak mydriatic effect of atropine starts within an hour after instillation and the peak cycloplegic action of atropine starts after approximately 3 hours, then phases off.10 In an attempt to reduce the impact of atropine side effects on near vision and pupil size, it is typically instilled at night time, before sleep. This has been followed in subsequent studies of atropine + OK, where atropine has been used 5-10 minutes before applying the OK lenses.4-7

Interestingly, in a study by Kothari et al investigating the efficacy of 1% atropine as monotherapy, 17 subjects who instilled drops at bedtime progressed more than 0.50D a year. 13 of these subjects subsequently progressed less than 0.50D a year after they were switched to instill atropine in the morning (7am).11 There were no baseline age or refraction predictors of the faster progressors. Hence, it seems that time of atropine instillation may potentially influence efficacy, but further study is required.