Axial length measurement in myopia management – how often and how much change is normal? 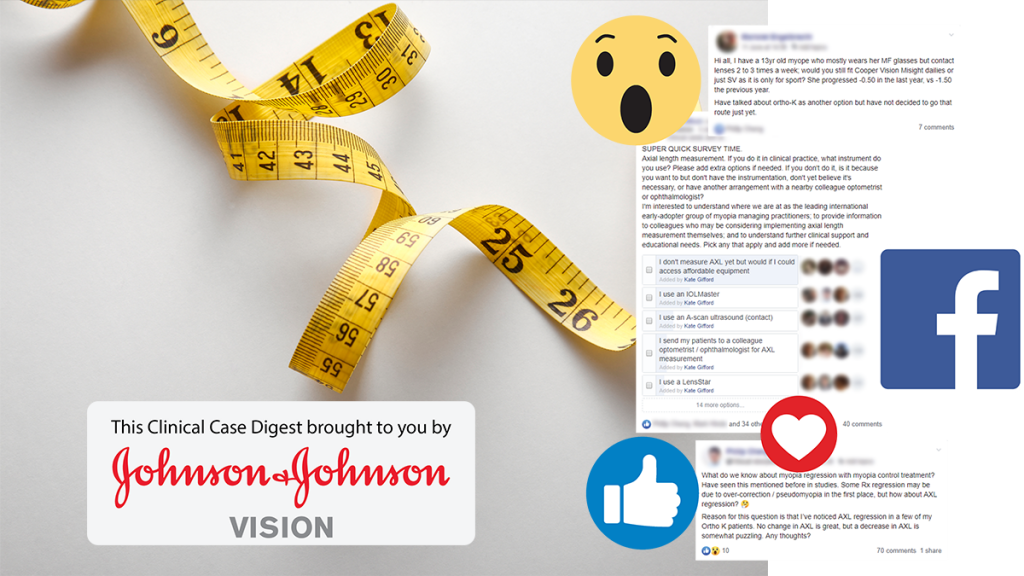 How frequently should we measure axial length in myopia management practice, and how should it best direct our treatment strategy? Colleagues raised questions about this in the Myopia Profile Facebook group (link) - here we discuss how axial length change is related to refraction and ethnicity, and how to determine whether an axial length change is normal due to emmetropization or indicating myopia progression. 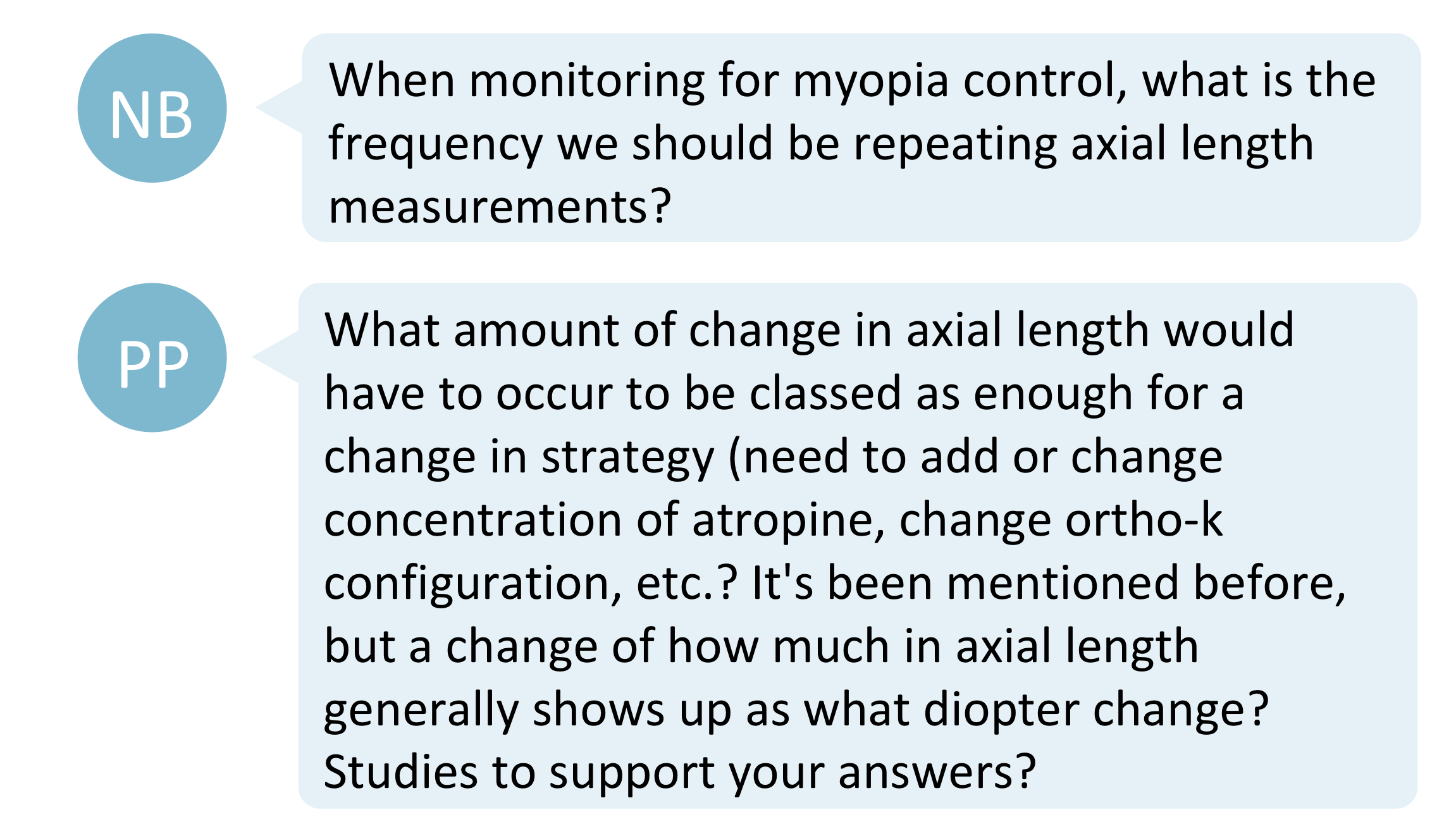 How frequently should we measure axial length? 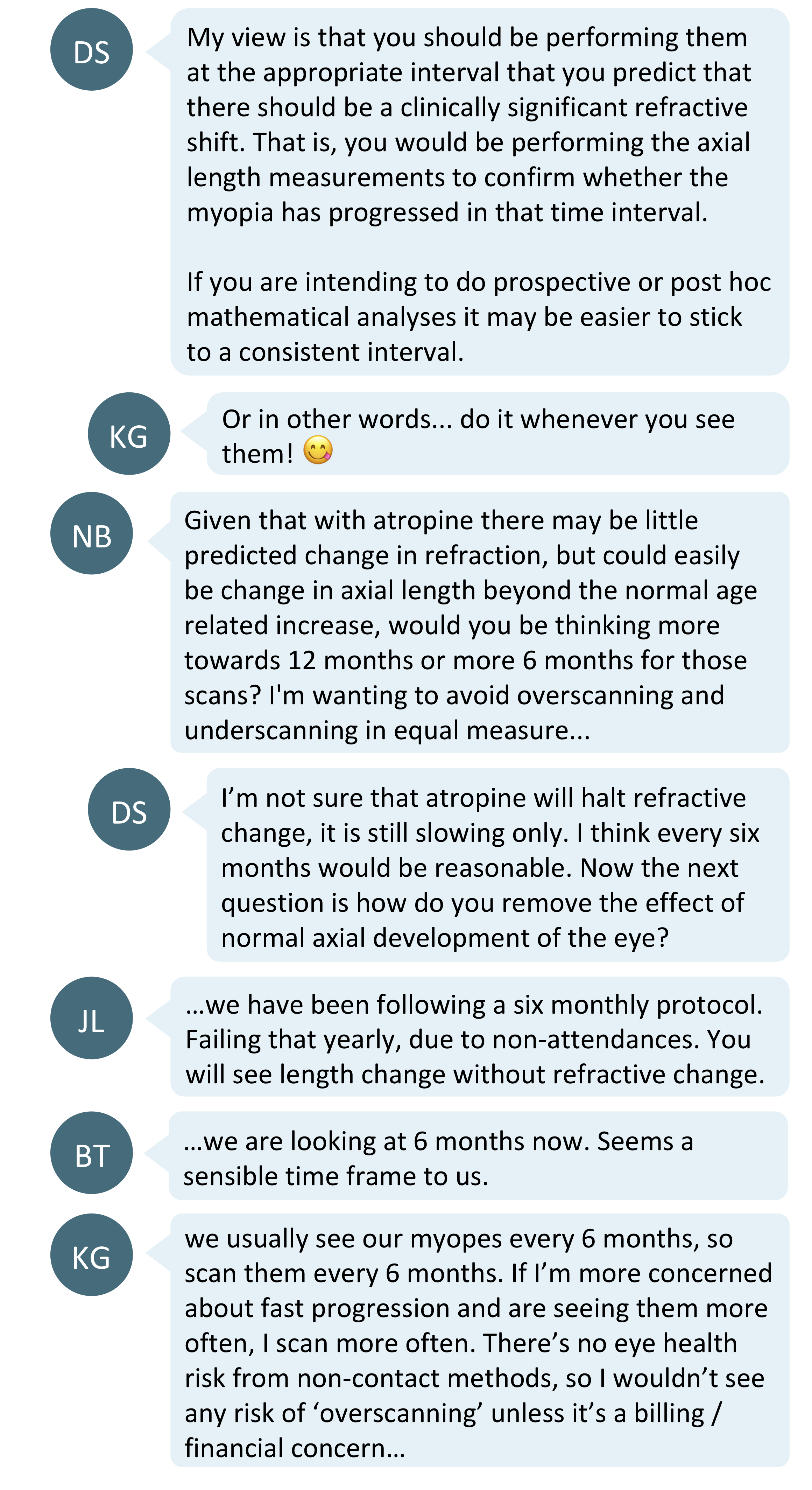 Most commenters suggest monitoring myopic patients every 6 months or to see them more often if the patient is a faster progressor.

There were also discussions about how to determine the normal, expected amount of axial length change in children due to emmetropization, and separating this normal growth from myopia progression growth. 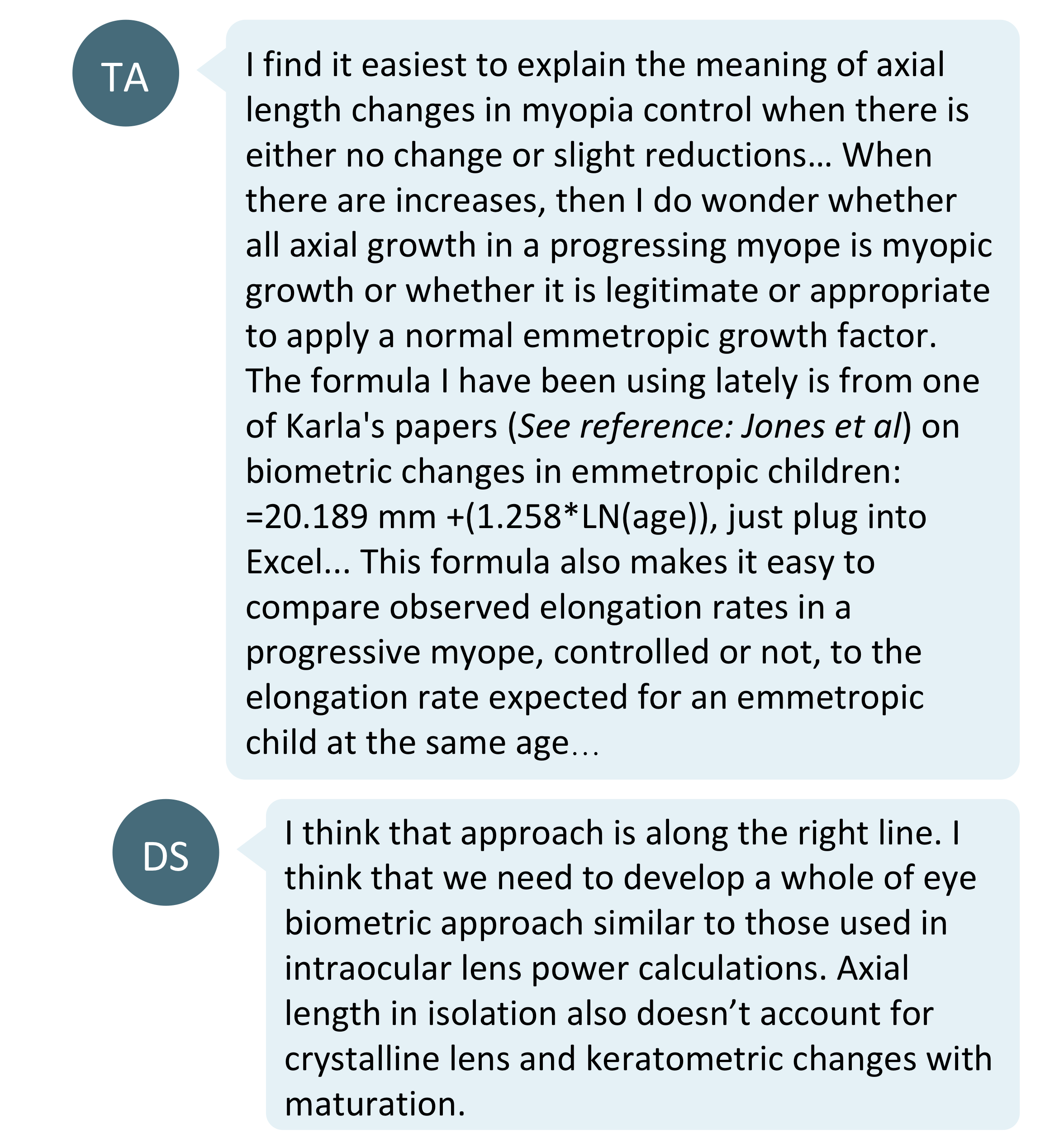 Jones et al also shows that the corneal curvature of myopes tends to stay stable whilst emmetropes’ flatten over time. An emmetropes’ cornea flattens while axial length increases, maintaining a balance in emmetropia. Meanwhile, a myope’s cornea does not change in curvature with axial length change, leading to an increase in myopic refractive error.1  It’s not all about the cornea, though – the crystalline lens likely plays a bigger role in the loss of balance in refractive components that occurs in myopia development. Mutti and colleagues2 found that in children who became myopic, before onset the crystalline lens underwent similar thinning, flattening and loss of power to children who stayed emmetropic. Within a year of myopia onset, though, the crystalline lens stopped these compensatory changes  which continue in emmetropes throughout normal childhood axial elongation. Also, it is important to remember that some component of childhood axial length increases are not indicative of myopia progression, and are in fact normal.

How is axial length change related to refractive error?

As described in Six questions on axial length in myopia management the refraction-to-axial-length ratio is variable across age groups, studies and the range of both measurements so isn’t so easy to simply define. A big part of the complexity is due to the variability in measurement of both refraction and axial length. Here are two exampes from multifocal contact lens myopia control studies. In the MiSight three year study,3 the 1mm = 2.40D in both their treatment and control groups. In the newly published BLINK study,4 1mm = 1.4 to 1.6D across the treatment and control groups. This is despite similar age ranges, ethnicities and methologies in both studies. The simple answer? We’re still learning.

How is axial length change related to ethnicity?

The table below shows the percentiles of axial elongation European and Chinese children reported by Diez PS et al and Tideman JW et al.5,6 This shows that children of Chinese descent have longer axial lengths than those of European descent.

How much change in axial length is required for a change in myopia control strategy?

There is no definite value suggested for one to change the strategy. Given the variability in axial length change based on age and ethnicity, the best approach is to change strategy if the current one does not sufficiently reduce myopia progression. This can be gauged when progression is higher than that expected as reported in the literature.

Axial length progression can be gauged using the percentile charts above - a child who jumps to a higher percentile over time is likely demonstrating accelerated growth.

To use another example from the literature, the COMET progressive addition spectacle lens trial analysed a variety of factors for their influence on myopia progression and found the strongest relationship was with baseline age. The progressive addition lens (PAL) intervention showed only a small treatment effect over three years. Axial length elongation by age was evaluated in an ethnically diverse group (46% White, 26% African American, 15% Hispanic, 8% Asian, 5% Mixed).7

Secondly, when results were pooled for all children (treatment PAL and control SV spectacle groups), unadjusted axial elongation over three years was:

To determine if a treatment strategy is working as expected, one would compare the axial elongation likely in a single vision corrected myopic child - as provided above - to the expected percentage reduction with the strategy. For more help on understanding efficacy you can read this blog, and also get more help on gauging success in this blog.