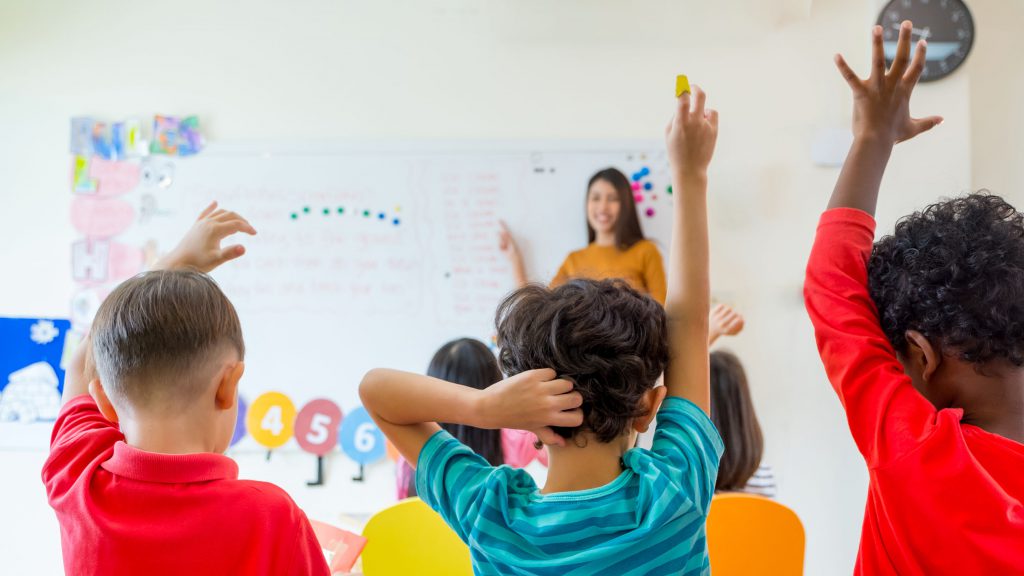 Education and myopia have had a long association, both anecdotally and from research findings with studies in general finding strong correlations with education and prolonged close work rather than a definite causative link. This study investigated the impact of education on refractive error by examining the relationship between increasing the school leaving age and myopia.

Plotnikov et al analysed data gathered from UK Biobank participants born in a nine-year interval centered on 1957 who were directly impacted by the Raising of School Leaving Age (ROSLA) policy implemented in England and Wales in 1972. ROSLA was found to have a causal effect on refractive error of -0.77D, indicating higher myopia from an extra year of schooling.

This study revealed that an extra year of schooling led to higher adulthood myopia with greater effect on those with genetic predisposition to higher myopia (-1.47D) rather than lower myopia (-0.50D).  The suggested explanation is that those in the higher risk group were destined to be myopic anyway and that the extra year at school was to blame for increased myopia in those who were otherwise not expected to become myopic. Consequently we need to be aware that it isn’t just the myopic children that need monitoring for myopic progression. Any child, regardless of their refractive error can potentially be at risk of becoming myopic. While this study does not investigate indoor vs outdoor time, it highlights the potential benefit from spending time outdoors to help offset this studies demonstrated impact on myopia from increased time spent at school, following the implication that extra schooling will likely result in more time spent indoors.

This analysis was limited to participants from England and Wales and suffered from potential for selection bias and a modest sample size, however its contribution is invaluable as there are limited opportunities to assess the true impact of direct alteration of schooling years on refractive error. The authors were cognisant of the many errors that could be introduced from their analysis and detailed the steps they took to analyse and eliminate errors. By example the found a difference in education attainment between the UK biobank population and the general population - they applied an inverse probability weighting function to account for the higher proportion of educated individuals in the UK biobank dataset resulting in a shift from -0.55D causal effect of ROSLA on adulthood myopia to the reported -0.77D.

Much of the published research reports association between a predictor and outcome variable rather than direct causal effect of an interaction. E.g. in this study the direct effect of 1 year less schooling on myopia could be established, which is a different measure to reporting an association between time spent in school and myopia and using this to infer the effect of longer time spent at school. The difference between the -0.29D effect from the standard linear regression analysis and the -0.77D effect from the more advanced RD analysis used to estimate the causal effect highlights how the way this research question is posed influences the outcomes. Ultimately it is measurement of outcomes from direct interactions that provide the most value which should be kept in mind when interpreting outcomes from published research. In this regard it requires drastic action like the ROSLA reform to create the test from control conditions in research on how the number of years spent at school influences adulthood myopia, limiting the future research on this topic.

This study aimed to estimate the effect of education on refraction error for those children impacted by the ROSLA 1972 Reform which required 15yr olds to stay at school for a further year before leaving.

Participants born between Sept 1956 and Sept 1969 were selected from the United Kingdom Biobank project[1] collected during the period 2006-2010 and further restricted to include those with data available for refractive error (non-cycloplegic autorefraction), age, completed full-time education, born in England or Wales with a known month and year of birth. Polygenic risk scores for predicting if an individual had high or low genetic predisposition were established based on a genome wide association study of 287,448 UK Biobank participants. Standard ordinary least squares (OLS) was performed to establish association between schooling years and adulthood myopia followed by regression discontinuity analysis (RD) to establish a causal relationship between an extra year of schooling and myopia. Differences in these statistics between those identified as low or high genetic predisposition were assessed.

The analysis sample comprised 21,127 UK Biobank English and Welsh participants who were 15yrs old when the reform was introduced.  Their birth year would have been 1957 so this was the cut-off point for the study.  The authors wished to include those who had English or Welsh ancestry and whose date of birth fell between September 1945 and September 1969.  Further stipulations were that there was no previous history of ocular pathology or eye disorders, and genotype data was available.  The average age of the cohort was 52.9yrs old and 56.3% were female.

The cohort was asked about their educational achievements and the years they spent at school and ophthalmic assessment was available further into the study where 23% of the cohort had their ocular history and non-cycloplegic best vision sphere auto-refraction assessed and averaged between the right and left eyes.

A polygenic risk score (PRS) was created for refractive error from an independent genome-wide association study (GWAS) sample of over 287,000 participants who did not have auto-refraction results but who did state their ‘age of onset for spectacle wear’ (AOSW).

This PRS was used to predict a genetic predisposition for myopia. The correlation between a genetic risk for AOSW-inferred refractive error and that from auto-refractor results was deemed statistically significant enough to apply to the study sample, which was split into those who had a PRS for relatively high risk for myopia and those with a PRS for low risk for myopia.

Effect of ROSLA on refractive error

Linear regression (OLS) was used to estimate the effect of ROSLA on refractive error. Because not all school pupils were affected by ROSLA a ‘fuzzy’ type regression discontinuity analysis was performed to restrict analysis to those only affected by ROSLA with these participants coded according to the number of months before or after the ROSLA cutoff that they were born. Different bandwidths of months before and after the cutoff date were analysed - larger bandwidths gain from increased precision from larger sample size but run greater risk of including participants born more distant from the cut off date. The Calonico et al[2] strategy was followed to establish the optimal bandwidth for analysis.

To overcome the above risks and to estimate a causal effect of ROSLA on adulthood myopia, the authors performed a  regression discontinuity (RD) analysis using optimal bandwidth of 53.6 months (4.5 years) either side of the cutoff date:

The authors concluded that there was an average causal effect of -0.77D on refractive error from the 1972 Reform.  The assumption is that the additional time in education was associated with more myopia.

Those with a relatively higher genetic risk of myopia may have been affected to a lesser extent than those at low risk. It is possible they were likely to develop myopia irrespective of education and as myopia is multi-factorial, being in school will be just one factor of myopic progression.

The fact that those children originally deemed to be at lower genetic risk of myopia showed a higher increase helps reinforce that more time spent indoors doing close work is a catalyst for myopia regardless of what the genetic background genetic risks are.

Purpose: Cross-sectional and longitudinal studies have consistently reported an association between education and myopia. However, conventional observational studies are at risk of bias due to confounding by factors such as socioeconomic position and parental educational attainment. The current study aimed to estimate the causal effect of education on refractive error using regression discontinuity analysis.

Methods: Regression discontinuity analysis was applied to assess the influence on refractive error of the raising of the school leaving age (ROSLA) from 15 to 16 years introduced in England and Wales in 1972. For comparison, a conventional ordinary least squares (OLS) analysis was performed. The analysis sample comprised 21,548 UK Biobank participants born in a nine-year interval centered on September 1957, the date of birth of those first affected by ROSLA.

Conclusions: Additional compulsory schooling due to the ROSLA 1972 reform was associated with a more negative refractive error, providing additional support for a causal relationship between education and myopia.