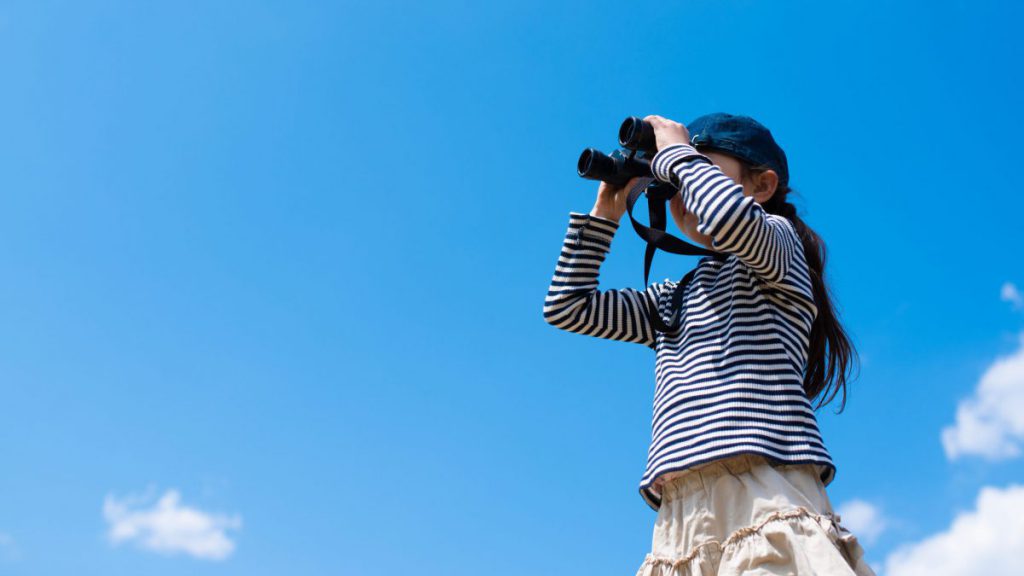 This novel analysis explored the absolute axial elongation of treated and untreated myopes in the MiSight 3-year clinical trial3 in comparison to previously published models of myopic and emmetropic eye growth. The results demonstrate that 3 year axial elongation in MiSight treated myopes approached that of ‘virtual’ age-matched cohorts of emmetropes. The ‘untreated’ (control) MiSight myopes showed similar axial elongation to the historical models, validating the comparison.

Since emmetropic eyes elongate in childhood, these results indicate a potential limit to the short-term percentage efficacy of myopia control treatment, as a ‘physiological’ component of eye growth can be expected to be retained.

The mean 3-year elongation in MiSight treated myopes is less than half of the progression for untreated control subjects (those wearing Proclear single vision contact lenses). This is presumed to indicate a comparative treatment efficacy of around 50% over three years.3

The untreated control myopes in the MiSight clinical trial show similar cumulative axial elongation over 3 years (0.62mm) to those predicted for the virtual cohorts of myopic children based on both the OLSM (0.70mm) and SCORM (0.63mm) models.

The goals of this analysis were to firstly compare eye growth measured in treated and untreated myopes in the MiSight 3 year clinical trial to untreated myopes and emmetropes in previously published population studies of childhood eye growth. The second was to utilize large data sets on normal physiological eye growth from previous studies to characterize the myopia control effect found with MiSight and to appropriately set myopia control expectations.

This longitudinal axial length data was then compared to data for myopic and emmetropic children in two large cohort studies. These were firstly the Orinda Longitudinal Study of Myopia (OLSM)4 in the US, a twelve-year study which included 737 children between 6-14 years of age. Of these children, 247 became myopic, where 76% were emmetropic or hyperopic at baseline, and 194 were persistent emmetropes.

The second comparator was the three-year Singapore Cohort Study of the Risk Factors for Myopia (SCORM)5 study, which included 1775 children (mainly Chinese) between 6-12 years of age. Of these children, 616 were progressing myopes and 369 were emmetropes. Vtireous chamber depth (VCD) data was used for this cohort due to age limitations past age 13 in the axial length data.

Both studies published equations for eye growth in emmetropes and progressing myopes6,7 that were subsequently compared with the MiSight clinical trial data. Using these previous published equations, annual axial (or VCD) elongation for ages 8-14 years was calculated. The OLSM and SCORM myopes and emmetropes were found to be broadly similar.

Then, a ‘virtual cohort’ of myopes and emmetropes from each of the OLSM and SCORM models were created. Each of these four virtual cohorts had the same age distribution as the MiSight clinical trial subjects at baseline (mean 10.1 years). The predicted elongation was calculated at years 1, 2 and 3 for myopes and emmetropes using both the OLSM and SCORM models. 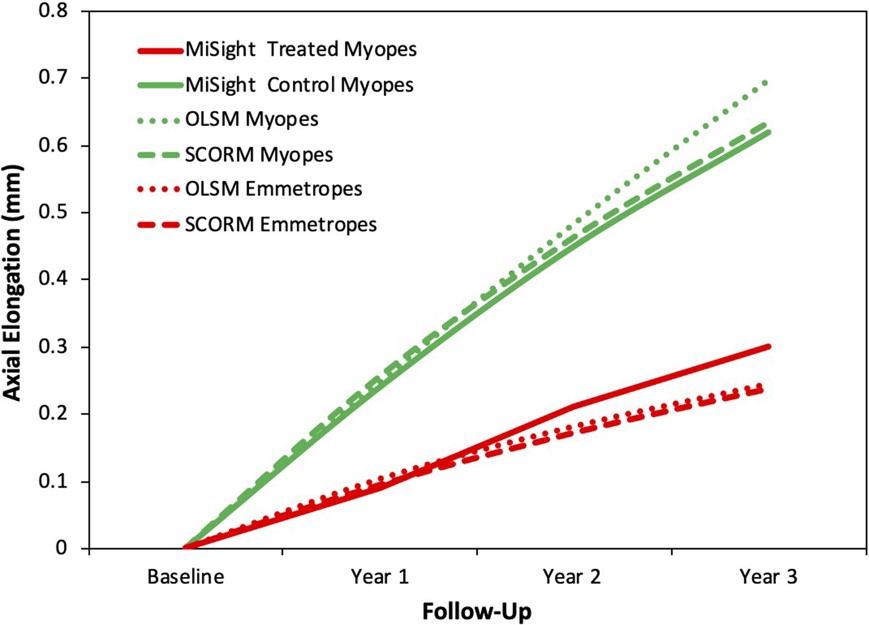 The results shown in Figure 1 from the paper indicate that ‘untreated’ myopes in the MiSight study (wearing the control single vision contact lens) showed similar axial elongation over each of three years to the single-vision wearing myopes in the OLSM and SCORM matched cohorts. This validated that the MiSight untreated myopes were similar to historical myopes.

The most interesting finding is that the MiSight-wearing myopes (‘treated’) showed similar eye growth to the historical emmetropes, indicating a slowing of eye growth to ‘physiological’ levels expected in emmetropic children. This led to the formation of two hypotheses by the authors regarding eye growth - that myopic axial elongation includes a component of physiological growth, and that optical myopia control strategies (or at least, in the case of MiSight) may minimize the former but not prevent the latter.

When using short-term percentage comparisons, the OLSM and SCORM emmetropes show around 30-40% rate of axial elongation to (untreated) myopes. Hence, ‘controlling myopia’ to the limit of only observing the emmetropic rate of eye growth would predict a ceiling of 60-70% comparative efficacy. Perhaps this indicates the physiological limit of myopia control efficacy - can the myopic eye be expected to grow more slowly than an emmetropic eye? Is this a reasonable goal if absolute eye length is the key ocular health risk factor? Future comparison of treatment groups to matched emmetropes, and even concurrent emmetropic groups in myopia control studies, could help elucidate this potential efficacy maximum.

Purpose: Both emmetropic and myopic eyes elongate throughout childhood. The goals of this study were to compare axial elongation among untreated progressing myopes, progressing myopes treated with a myopia control contact lens and emmetropes, in order to place axial elongation in the context of normal eye growth in emmetropic children, and to consider whether normal physiological eye growth places limits on what might be achieved with myopia control.

Methods: Axial elongation data were taken from the 3-year randomised clinical trial of a myopia control dual-focus (MiSight® 1 day) contact lens. These were compared with data for myopic and emmetropic children in two large cohort studies: the Orinda Longitudinal Study of Myopia (OLSM) and the Singapore Cohort Study of the Risk Factors for Myopia (SCORM). Each study's published equations were used to calculate annual axial elongation. Four virtual cohorts—myopic and emmetropic for each model—were created, each with the same age distribution as the MiSight clinical trial subjects and the predicted cumulative elongation calculated at years 1, 2 and 3 for myopes and emmetropes using both the OLSM and SCORM models.