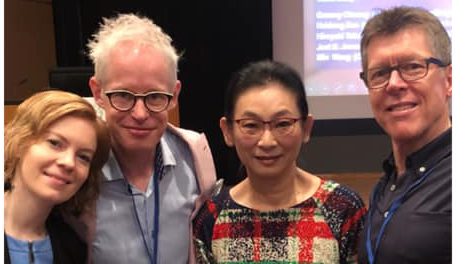 Announcing Part 3 of 4 of exciting updates from the 2019 biannual International Myopia Conference! You'll find links to parts 1, 2 and 4 at the end, however read on for updates on OrthoK, MYLO and MiSight!

Is a smaller treatment zone diameter (TZD) in OrthoK better for myopia control?

This is a hot topic where lots of anecdotal results have been reported but nothing has been yet published correlating TZD with myopia control efficacy. Paul Gifford, with Pauline Kang, Vinod Maseedupally and then students-now optometrists Michael Tran and Courtney Priestley at UNSW. This was hot off the press for the Australian OrthoK meeting last year, and Paul has done a whole bunch of additional optical modelling since, collaborating with Yongji Liu and David Atchison at QUT.

So, firstly Paul created a lens design which reduced the topographical TZD outcome by almost 1mm (from 5.80 to 4.87mm) by changing both diameter and asphericity in the optic zone. Secondly, he undertook optical modelling to evaluate relative peripheral refraction (RPR) changes, and found that while the topographical outcome was different with the smaller TZD, it had the opposite effect on RPR than assumed - the smaller TZD meant LESS myopic shift in RPR. This makes sense if you think about how a smaller TZD means less tissue volume moved around, so less mid peripheral steepening.

Thirdly, he worked with Yongji and David to build on the optical model (the spreadsheet was intense and hundreds of columns long; I saw it!) to look at the influence of pupil size on RPR. They found that changing pupil size didn’t alter RPR. The top right image shows charts of RPR modelling for 2mm and 6mm pupils to look at both extremes.

So maybe if smaller TZDs do control myopia more effectively, the mechanism may not be due to change in RPR or due to pupil size.

Finally, they investigated changes in spherical aberration (SA - think of it like a D centred multifocal). This is where the smaller TZD showed greater SA for smaller pupil diameters of 2-4mm; the standard TZD lens had more SA at a 7mm pupil; for 5-6mm pupils there were no differences.

More research is needed to understand what role SA may play in myopia control. The smaller TZD reduced the on-axis refractive outcome, though, for 5-7mm pupils, which could be an important consideration in fitting kids with big pupils. (Bottom left image).

We still have a lot to learn, but without published data, the claims of higher myopia control efficacy in OK designs with smaller TZDs, or for smaller or larger pupils, are simply claims at this stage.

Presented by Paul Chamberlain, part 1 was the three year study, on children aged 8-12 years at baseline. The results showed tolerance of the lenses, worn 6 days a week, and a bit over a 50% axial and refractive efficacy. Part 2 of the study was where the researchers decided not to continue the single vision wearers, for ethical reasons - if the intervention is working well, it becomes unethical to continue the control group and harder to get parents to consent to a potential continued placebo treatment.

From 3 years onwards both groups were fit in the MiSight lenses. The aim of Part 2 was to compare the rate of progression between the two matched populations. It’s not a myopia control study any longer as there’s no control group, but with different study goals - since the efficacy of MiSight had been demonstrated, the focus shifted to assessing comparative efficacy and acceptance in older children. All of the children in Part 2 were aged 11-15 as they were 8-12 when they commenced Part 1. Here’s what they found:

So in summary the MiSight seems to work well over at least 3 years and probably 5; the safety profile is robust; acceptance is very good but visual expectations need to be managed in older children who are already adapted to SVSCLs. 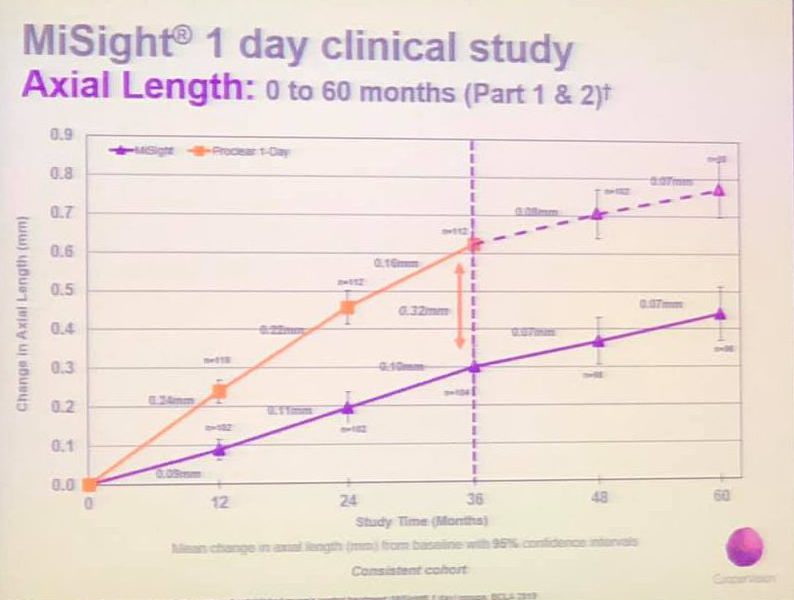 Comparing the efficacy of the MiSight and the MYLO

This study looked at the efficacy of the Misight lenses and the BHVI Extended Depth of Focus (EDOF - now marketed as the MYLO) contact lenses. In this one year study by Padmaja Sankaridurg, along with BHVI researchers and collaborators in China, 95 children were assigned to either;

After six months, groups 2 and 3 swapped which lenses they were wearing in each eye. The findings?

We don’t have many direct comparisons of lens-to-lens in the literature, so this is a very useful finding. While the contralateral eye correction doesn’t reflect a clinical situation, it’s a very useful study design to provide a short term indicator of comparison and to inform further studies. 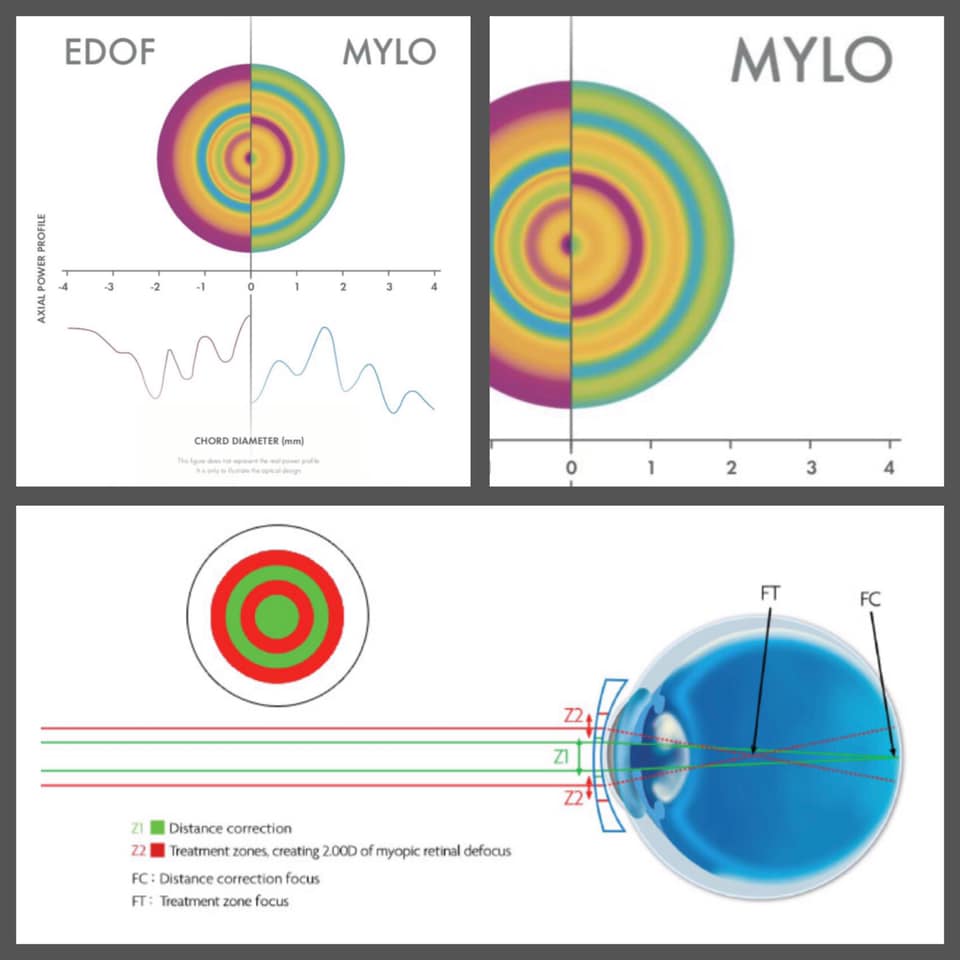 I was lucky enough to share the stage with Pauline yesterday, who is arguably the world’s most prolific OrthoK researcher. Along with her collaborators, she has published on myopia control (the ROMIO study), toric myopia control (the TO-SEE study), rebound effects (the DOEE study - don’t stop before age 14), safety and is the PI on the much awaited atropine 0.01% and OrthoK (AOK) study of which reported 6 month findings show an additive effect.

Recently she has published on the Number Needed to Treat (NNT) for OK - for children aged 6 to <9 years, the NNT to reduce risk of fast progression (0.36mm or 1D in a year) is 1.8. This means that if fitting two younger children with OK would prevent one from experiencing fast progression over two years, compared to SV specs.

NNT is a well known concept in pharmacology - for example, the NNT of a statin (anti cholesterol) medication to spare one person a heart attack is 100. The other 99 get no measurable benefit. Arguably the one other kid you’ve fit with OK gets the benefit of wearing OK! Pauline’s studies have shown that in children aged 6 to <9 years, there is a 0.11x risk of fast progression in OK wearers compared to SV spec wearers; or a relative risk reduction of 88.8%.

So go at it for those young myopes - OK is a fantastic option for myopia correction and control reasons. But what about older children? The relative risk of fast progression decreases in older kids. Pauline said to me after our session that there’s significant concern, especially in China where OK and myopia control awareness is booming, of parents being unnecessarily guilted into interventions which may not be affordable. On stage she relayed a story of a mother in the HKPU clinic, in tears because she couldn’t afford OK for her three children. Aside from time and cost concerns, there is also the relative risk of contact lens wear.

So Pauline proposes the following decision making tree published in the CLAE journal. Be proactive in recommending OK for children aged 6-12, especially those with a recent history of fast progression. For teens, though, consider monitoring for progression and in slow progressors, consider the primary benefit of OK being the myopia correction benefits. This is an impotent consideration in our evidence-based communication to parents.

Pauline added weight to this issue of percentage efficacy by showing again how younger groups (‘YC’ age 6 to <9) get an apparently lower % than older children (‘OC’ age 9 to <13) and early adolescents (‘EA’ age 13-16). The treatment efficacy looks huge for the EA’s but it’s actually not clinically significant! Another reason to beware the % when comparing between studies or groups.

I believe Pauline’s key message is to judiciously and fairly recommend myopia management interventions. I’m not the only one you’ve probably heard say that “every myopic child is a progressor until proven otherwise” and I still believe this is true; we simply need to be mindful of our patients’ and parents’ capacities for interventions and striking the balance between proactivity and pragmatism is going to vary case-by-case.