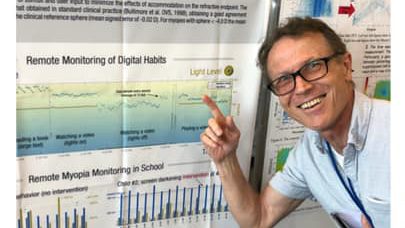 This year, the annual Association for Research in Vision and Ophthalmology (ARVO) was held in Vancover 2019 from April 28th to May 2nd. Check out the Myopia Profile Facebook group for individual live posts, but here is a summary of the fabulous new research presented at the conference. Click on the headings for more information and a link to the presentation abstract. You'll find links to Part 1, 2 and Part 3 of the ARVO latest at the end of this blog.

Are mobile phones contributing to myopia?

Mobile phones and myopia? Saoirse McCrann, James Loughman and Ian Flitcroft investigated the smartphone use of 120 myopic and 182 non-myopic Irish children and found that:

When it comes to the retinal image differences of a book compared to a phone, the phone subtends a smaller horizontal and vertical visual angle relative to a book, with the dioptric error maps showing a small increase in central hyperopic defocus and a large increase in myopic peripheral defocus. Now shouldn’t that be a good thing for slowing eye growth? Well maybe, maybe not. The authors concluded though that more central eye growth and less peripherally could lead to ‘a more prolate scleral profile prone to peripheral hyperopic defocus in natural viewing conditions, providing further myopic growth stimulus.’ Thought provoking stuff! And a little more evidence on the evil of phones to tell those parents who look at you with desperation in their eyes.

Could this be the solution to the screen scourge? This is mega exciting stuff - so clever and yet so simple. In a collaboration between Indiana University in the US and University of Murcia in Spain, Matt Jaskulski, Arthur Bradley, Peter Kollbaum and Norberto Lopes-Gil are developing a digital device app which:

The team are also working on a practitioner interface where you could have all of your patients linked to your single account for tracking over time.

In the image you can see Arthur Bradley who’s super excited about being so useful in his own studies now as an absolute presbyope.  Arthur is pointing to an experiment where the app measured his working distance while using a smartphone, which interestingly showed how when reading a book with either small or large print, the downward slope indicates he got closer with time (dropping his head down - interesting for the neck-ache professionals!) and when watching a video with the lights off, his working distance was variable indicating an unstable visual demand.

The Child #1 chart shows the duration, light levels and working distance of typical device usage over a month, and the average working distance is about 25cm (the blue bars). Child #2 has had the ‘dimmer switch’ set at 40cm, and you can see that the average working distance is now definitely over 40cm. This kid used their screen less too - maybe because the dimmer was annoying (win!) or maybe it was just that child. Regardless, even if you don’t reduce the overall time spent on a device, increasing the working distance from 25cm (4D demand) to 40cm (2.5D demand) reduces the diopter-hours dramatically. Diopter-hours are a composite of how close the task is and how long it is undertaken, and the correlation between near work and myopia has been described in this way. 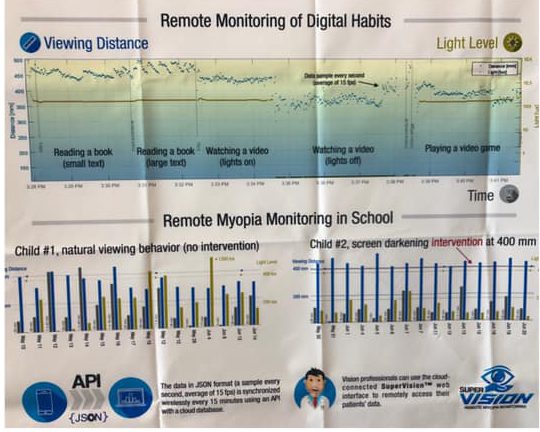