James Wolffsohn, Professor of Optometry and Deputy Dean of Life and Health Sciences at Aston University, England, presented his review of current myopia management practice across the globe at the 2015 British Contact Lens Association (BCLA) meeting. Professor Wolffsohn is an internationally renowned researcher, and the first to attempt this kind of analysis on uptake of myopia control in clinical practice, which he coordinated with around a dozen international colleagues. Having personally adopted myopia control into my specialty clinical practice over the last 10+ years, I was involved in recruiting the Australian contingent of the survey respondents, and was keen to see what he had to report. 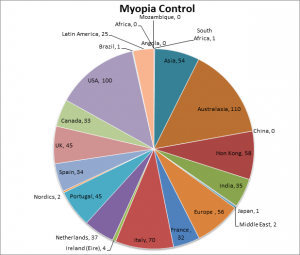 Sat amongst a packed auditorium I feverishly wrote down as much as I could, and with the permission of James have used my notes to form this blog. One of the first questions that James asked in this survey, which was conducted on behalf of the BCLA, was how concerned practitioners were at the increasing frequency of myopia in their practice. Across the regions that were surveyed, broken down into UK + Eire, Europe, Asia, Australasia, North America, and South America, the response was equivocal at a medium approaching high level of concern. Practitioners actively using myopia control in their practice was lower with responses from all regions averaging half way between low and high activity, and of all optical corrections strategies, orthokeratology was felt by all to be the most effective.

I found it encouraging that most respondents across the globe did not consider under correction as a strategy for controlling progression of myopia, however approximately 20-25% reported that they sometimes considered this as an option. In terms of type of correction used for their progressing myopes over a typical month, single vision spectacle correction was reported to be prescribed around 50% of the time, with single vision contact lenses and orthokeratology prescribed around 20% of the time. Surprisingly multifocal contact lenses were only prescribed around 5% of the time. Demographically, European, Australasian, and South American practitioners reported using orthokeratology more often at around 20% compared to the rest of the world at around 10%. A further surprising outcome from this survey was that responses from Asian practitioners revealed higher use of single vision spectacle correction in progressing myopes compared to practitioners from the rest of the world. This is disappointing given the lack of evidence base for using single vision spectacles for myopia control, and sits incongruously against most practitioners simultaneously responding that they felt orthokeratology was most effective. Clearly there is a disconnect between understanding the scientific results and translating these into clinical practice.

When practitioners who only prescribe single vision correction for myopes were asked what is preventing them prescribing new strategies, around 12% reported that they felt myopia control strategies were not effective, with a slightly greater amount considering outcomes as unpredictable. Cost to patient was also considered a barrier, which I personally found surprising given that a lifetime of higher myopia is likely to lead to greater cost for stronger spectacle correction and myopia associated ocular disease management. Noticeable demographic differences were also seen, with Europeans far more concerned about contact lens safety than their counterparts across the rest of the world. Inadequate information was also indicated, with nearly 40% of respondents in the UK and just over 30% of North American respondents reporting inadequate information, compared to between 10% and 20% for the rest of the world.

Clearly there is need for more information, which is what we are aiming to achieve through this website and blog. Subscribe to our newsletter to receive a snapshot of all new information on a monthly basis. I also suggest you check out myopiacontol.org as a research resource.

James has informed me that he now has nearly 900 responses, and I for one am looking forward to seeing the final paper – no pressure James! I’m also interested in hearing your thoughts, so please leave your comments.

Addendum: the full paper has since been published, with almost 1000 responses from over a dozen countries.